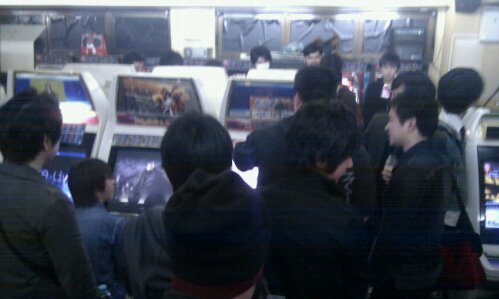 This is… pretty much a bad place to go because it’s expensive and the monitor (vewlix) seems a little laggy. HOWEVER, they allow you to record matches and burn them onto a dvd!

Dune and Haregoro were very kind to me, while kicking seven shades of crap outta my face, donating cash to keep me going… not to mention I only got one win the whole day, so it was pretty cheap for them haha. UNTIL I got them to fight each other hehe, you’ll see later… One of my biggest mistakes in planning this KOF trip was bringing this stupid iPad. No flash means I can’t cast or even watch this DVD…

Anyway, let’s just say Dune’s Kyo and Iori are top notch, and of course Haregoro’s Joe is the best, however Joe is a character that has patterns that can be learnt, which led to my win, but will you get 50 matches experience? I have to thank Dune and Haregoro for the training. You will also notice that they were quite happy to play in a relaxed way until I got a win (he tore me apart afterwards lol) and then when they played each other… hohoho I think I prefer organising fights rather than being in them…. well, almost.

Then we went back to Carnival. There we met some guy who was training with Yuri and doing some tight hop A > dive kicks to break guard > into HD bum loop… this turned out to be Yanagi, who uses Kula, K’ and Yuri. Classically annoying Kula, but K’ was the real pain, whenever we both collided in the air and traded counters, his K’ would still manage to juggle me with ex minute spike > narrow spike > crow bites… He also seemed to set up a crossup with crow bites xx blackout xx crow bites. In retrospect I should have done crouching B against his early jump CD, but it’s as scary as Mature’s and leads to more juggles if he hits it… argh.

Here are some crappy hand phone shaky cam vids from the evening.

It’s interesting to note that many top players all over the world certainly have the reflexes but not the confidence to anti air a hopping attack. If you sense this caution, simply apply the following formula: poke, then jump attack.

A wild Nagihey appears! This is the organiser of the Carnival tournament, who was also very kind to me, and plays a great Liz and Mai. He introduced me to Mari chan, one of the sisters, and perhaps unfortunately, there’s no cross dressing or anything of the sort. Pretty solid play with Mr Karate – oh yes, while on day 1 players were looking quite flakey with the masked marauder, day 3 showed people were now ready to ra- … er… win. Interestingly many players here don’t use the Neomax but prefer to end with another few juggles then SDM.

Carnival was pretty much top tier whoring but hey it has to be done.

Gamespot Versus at Nisshin Nippori

First thing to note is that it is only 50yen a go but only one versus cabinet on CRTs. So… there’s no lag… but it’s a bit blurry. Kind of weird…

Now at Versus it was quite a different story, two teams, something like 10 vs 10. A few noobs here, so I didn’t feel too lonely. What I also found was a much wider range of characters, including Robert, Kensou, Chin and Raiden. Speaking of range, Myu san’s Clark was the business!! There was only one new pattern I learned, but I’m definitely assimilating it into my repertoire. You better hope you can catch the stream or see some youtube rips. Briefly it revolves around hopping in after the turnaround punch, but the timing is just… scary as hell for the opponent. And, he uses gatling for tick damage, as if he was a fireball character… I can’t believe it’s safe, but it sure looks like it. Myu also uses Ralf, zoning with the classic backhand and running in with normal throw, mixing up with perfectly placed sweeps. He pops some nice combos with nuke > ex nuke > bareback mount in the corner. Definitely one to watch when he has someone scared, but the tier whoring fearless players will still have the upper hand, as you will see.

Finally saw a Chin but the player didn’t follow the overhead with the fists and so got thrown. They need more work here. Saw a Billy, good, but again need more practice in this area, especially with the corner combo. The Leona I saw was being left sitting down the corner trying to squeeze out of Saiki’s ballerina kicks and fireballs. Not pretty.

I also noticed that players don’t fear my Clark running in after a knockdown because if they just hold back, there seems to be less vulnerability to being grabbed. If they flinched, they get grabbed, if they hold back, they don’t. Or perhaps my timing was off… being away from my ps3 is kiling me.

I really believe it’s fear that prevents players from responding, because on a good day I’ve seen all these players REACT to empty hops or crouching B’s and jump AFTER they see Clark raise his hands for the guard point grab. But when they are scared, they become the rabbit in the headlights…

Nice Kensou today using his qcf k to gain space and a crossup from underneath… well, you’ll see. Last minute ex diving elbows ftw. Nagihey’s Liz is also worth a mention, he likes to knockdown an opponent, run up, then cancel a teleport backwards into qcf A … or not, and before you know it, you’ve been grabbed…

SBO KOF 2002um Champ Oz was there!!! He was wailing away with EX Iori, but of course, knowledge of the older games can only go so far in XIII…

Had to fight against one of the best Benimaru players and while I knocked out his Karate, it all went tits up straight after.

A horrible Saiki was messing up everyone as I left. Still I hope my team (1P) wins!

The team battle is quite a nice idea, only half the attendees feel bad for losing (as opposed to everyone bar the top 5), which of course contains top players by random pick….

One more tournament with Nagihey on Friday… and then I’m gonna retire :p

Shout outs to Ringo san and the other guys if I forgot their name! 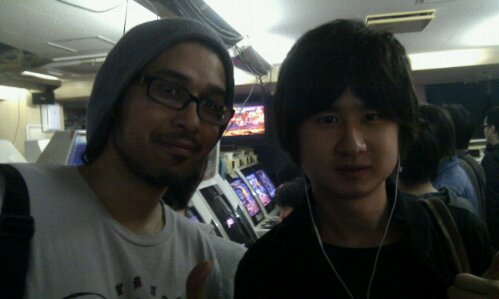 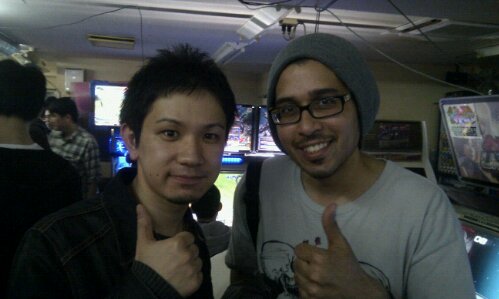