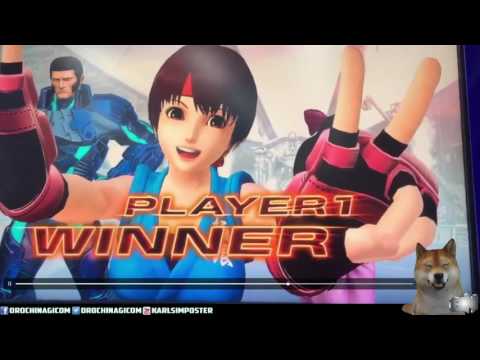 There’s just too much right now, a bit of a hectic buzz, but certainly a positive one.  Lots and lots of issues were addressed and while some were not happy with the top characters still remaining strong, some things were definitely pleasing.

It’s an interesting idea, and risky, to listen to the fans, the community that plays your game.  Especially when you’re no longer making money from them.  Catering to the older fans, we can see that KOF spirit having destroyed the freedom to roll away and zone gameplay, bringing back that aggression and pressure.  But that’s only what they did with the game-

SNK released, or at least seem to be about to release PSN themes for free (already available in Asia but maybe available in the west from Tuesday), which were previously pre-order bonuses.

They’ve created tshirts, which they’re not even going to sell, rather, give away at tournaments.

WHAT THE HELL SNK? WHAT ARE YOU DOING? It’s really nice but some of us actually want you to TAKE ALL OUR MONEY! lol

Well, take at least some haha.  At any rate, players and fans are really happy at the moment and 19 pages of changes means a good bit of playtime and resurgence of online activity.

Here’s a video of some of the changes

An exclusive series of 15 different KOF T-Shirts have been created, and will be distributed as prizes in future fighting game tournaments! pic.twitter.com/KopcxBtdr7