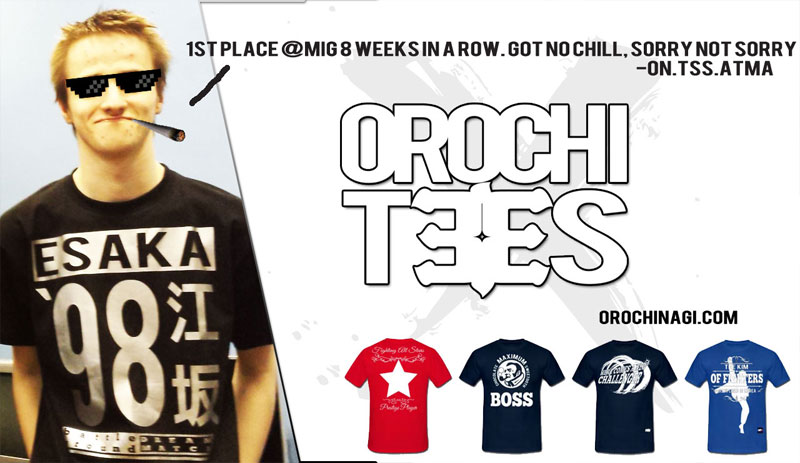 Updated with some input buffer info at the end!

But what does it mean??? Let’s go through it with our own tech specialist, Atma.

In previous KoF game there was different intentional input delay set to different moves in order for simultaneous input moves to be easier, I.E. rolls and blowbacks.

In KoFXIII for example all normals had 4f of intentional extra delay on top of the usual input delay from processing input. Directions had 1f of delay, specials, supers and command normals had 0f of delay.

What this video shows is that XIV has ditched all of that, so now what is left is only the input processing delay which from MikeZ’s tests is around 5f. 5f seems to be the batting average for fighting games recently.

SFV added a 3f buffer to the game, which as far as I am aware adds 3 extra frames to the input delay.

Where Capcom added, SNK removed, but don’t get it confused like KoFXIV has no input lag altogether.

Let’s go through that in detail:

It’s the delay from the time of button press or directional input to the execution on the display.  This is input delay, not to be confused with display lag.

Input lag is present in all games, this is the speed from your wired controller through the console to the display.
Even games on a CRT (Cathode Ray Tube aka TV) have input lag.

But why do we have input lag?

Because the input takes time to go through the system (console or PC), get processed and then displayed.

How much lag did KOF13 have?

Why was there additional lag for jumps and normal moves?

In previous games it is there for the sake of buffering, so that movement and combos would be smooth, players don’t have to be so precise.
For example if you press C+D in older KOFs, if you pressed the two buttons a few frames apart, it would still count as a CD.  Now you have to press them the same frame or 1 frame apart for them to be considered a simultaneous input.
It (Additional lag) is no longer required really, as far as I’m aware it was needed for old hardware/programming methods and it stuck around throughout the years.

So do we have to be more precise now?
Well yes, but if you are missing your cd or roll by like 3 frames that’s an issue with you, not the game.

Will this help netcode?

Not in the slightest.  That’s outside source input delay.  It isn’t intentional, as in it’s not made or added to help anything, it’s not tampered with, that’s just what it is.

Atma continues to stock up on tech, including the revelation that you have a 9 frames window to use Just Defend, which would explain why it seems quite easy, but after all it only helps build meter, it’s not a parry. Follow him on twitter @tssatma

Input Buffer is 4f for normals and 13f for specials and supers.

In an update to our <a href=”http://orochinagi.com/2016/07/5-5-frames-lag-explained-kofxiv”>article </a>about frame lag, Atma has discovered that the game has 4F input buffer.

Come on m8!
It changes nothing about intentional lag nor simultaneous input.
What it means is that you can press your normal 3 frames before blockstun ends, and it will still come out the first frame.
You can do your link 3 frames earlier than you are supposed to, and it will still work.

So I can mash earlier while blocking? Awesome!

Don’t forget the demo is out now! You better get practising with those inputs!