What needs to change in #KOFXIV – Global Feedback 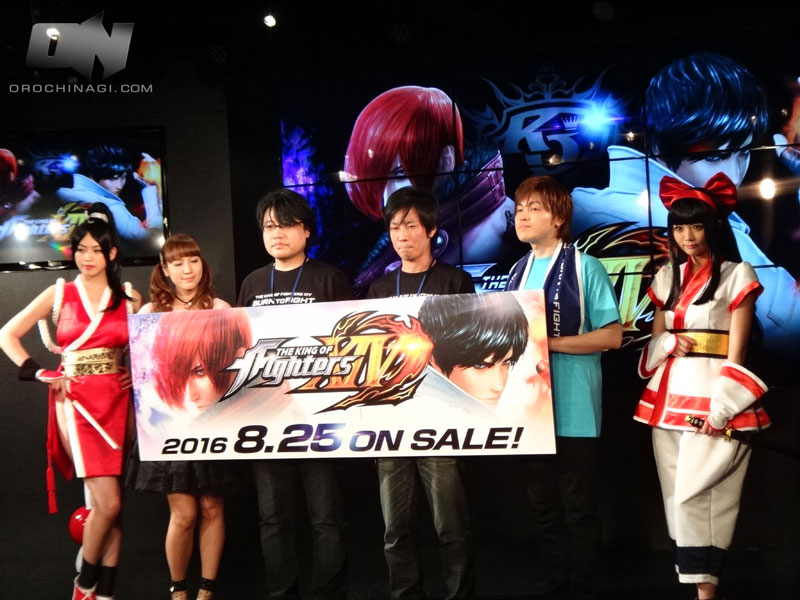 What needs to change in #KOFXIV – Global Feedback

Part 2 of a series of reports on the beta, we continue to collect feedback on the 24 and 36 character build of KOF14.  You can read part 1 here.

Please note these builds were not the finished product, and you’ll read that there were improvements between builds.

The core players, the fans, the old skool, they have feelings; they cannot be blamed for these, even if they are inappropriate for a new game that is trying to forge its own identity, with a new style.  KOF12 tried to be new, it didn’t work, even if had a cult following.  KOF13 was similar but new, and it was a success. KOF14 seems to be in the same vein, similar but new.  When players say “this is weird, this is wrong”, it’s because they are comparing the game to what they know and what they believe should work.  This is why making some people try a new game is veryyyyy difficult 🙂

As far as I can tell, SNK is trying to bring in a bigger mainstream crowd, and that means making some elements easier to handle for new players, and if you know the mainstream, that means reducing the impact of speed, hops & jumps, and complexity. SNK are doing exactly what Capcom and Arcsys have been, and are facing the same criticism from their core fans.   Did the beta test hit the spot?  Let’s see what more fans think, across the globe from Japan to the US.

KOF 14 system. Just defend gains your more meter but doesn't affect block stun , this is a very interesting system and I like it alot ??

If you couldn’t watch the video, he comments that the speed (of the 24 character build) was different, slower and easier for newcomers (but will this opinion change if the speed changes in the final build?).  He likes K’ because he looks cool hehe. He doesn’t care about the level of graphics and thinks the gameplay is more important. He likes the “burst” mode with access with to EX mode. He also notes that SF5 is simple, and XIV too, so there’s much more chance that he can play both competitively, which is great news for the stream monsters!!

Chris ax: Hmmm it’s definitely not KOF13! It’s very different, easy combos, for now the movement feels…. not bad, just different!  Regarding character normals and specials, I think the pushback is weird … As for Clark no comment.  The stages have become “not bad” (as opposed to “ugly” when he saw them on Youtube) and even beautiful for one or two of them! Character design is not that bad too, except for Andy, King and Kyo but I’ll buy day one for sure , I had fun at Stunfest! and I’ll give this game a chance for sure!

French player Vics spent a lot of time trying Vice at Stunfest, you can see him on Frionel’s twitch.  He simply said: “Day 1 buy lol 50 characters, as we said!!!!” and he makes a valid point!  The value, the modes, the diversity kind of overshadows floaty jumps, to be honest.  We had enough fun with 24, imagine 50!  This game will take years to know, understand and master!

Atlus brought the build to the major with showings on three streams, while players got to grips with the game.

Shinobi, one of the players attending, said:

I did enjoy the game at its current state. It has new things but the core feels like '98+XIII and I can dig that entirely.

I did enjoy the game at its current state. It has new things but the core feels like ’98+XIII and I can dig that entirely.

Justin Wong expressed a lot of interest in trying the game and when he found out it was at Combo Breaker he took the opportunity straight to play it.  Afterwards, he said:

Dune has played the newer 36 character build and agreed that the damage from Ryo’s overhead max mode combo was too much. Otherwise, He liked the poke and anti air style of gameplay with meter management and the use of just defend. The way he talks gives the impression the final game play will have a good balance.

Maccoy was enjoying Andy and Shun’ei and found Hein to be a solid character (whereas Keykakko was like “how do you know after such a short play test?” Lol).  He also noted a large interest in Hein by the female fans in the queue. Kohaikof from Mexico chipped in to say she was also very interested!

Keykakko really liked Nelson, noting that he seemed very technical – therefore interesting!  He also noted that the queue was made up of lots of casual fans, and these players were interested in things like win poses and animations.

Also attending the play test were two French players, Bignog and Widad, who are responsible for the long clips of the test on youtube.

Bignog: It’s interesting but maybe not as good as 13. However, it has a very fresh feeling thanks to the new characters but they are quite uneven in terms of moves (some seem to have limited moves).  This is clearly a KOF game and I noticed on the 36 character build that the jumps are definitely faster. I really like the new characters, especially Nelson, and the madness of Max mode, it reminds me a little of the V triggers of SF5.  I’m not a fan of zoning and at the moment the shoto characters seem strong because the jumps are more floaty.  Still, when I think about it, it’s the range of new characters that really makes me happy.

Haregoro gave a quick comment to mention he likes Joe’s motion and particularly his climax- which we still haven’t seen because the trailer fades out just before he launches it!!

We don’t want to seem greedy but….

So what needs to change in KOF14?  Not much actually.  We have noticed the absence of taunts, which might be interesting to the casual fans as noted by Keykakko and Maccoy, as players in a serious match almost never have the time to use them.  However, we are aware that all these extra things, as well as stage background animations (not to mention those live TVs in the stadium stage) could cause desyncs.  We hope SNK can find a way to simply turn them off during netplay.

The graphics, while they have been polished from build to build, we want more, and we will always want more.  Do your best, SNK!!  You can do it!!!

It’s the same effect as KOF 13. When you see the game in the flesh, it’s much better. When you start playing, graphics are the last thing on your mind, only to return when you see close ups for sdms and climaxes, which are pretty good! However, Kyo’s face will always be a point of debate…  Is that Kyo?  Is it a new Kyo?  Rosy cheeks?  eh??  Why is Andy so skinny and ugly?   Moan moan whinge whinge – it’ll never stop, but these things, the graphics, aren’t really important.  In terms of design, SNK has made a smart move to capitalise on anime and popular icons. While certain designs are not universally pleasing (eg Sylvie) the overall collection cannot fail to please the majority.

The jumps.  This will be an issue of contention for old players, but in my opinion, the speed needs to be slower, not faster.  Not just the jumps, the overall speed.  We want a game that is easier to start, not harder and terrifying due to the speed.  This is exactly what doesn’t help Guilty Gear and Blazblue at bringing in new players and what Street Fighter excels at.   The KOF14 hops seem the same as 13, and that’s lethal for attracting new players – it was a very common complaint, especially considering the netcode, and that’s covering older KOFs too, such as 98!

Frionel explained: “Speed of jumps are character specific.  Some characters have fast jumps, some have slow.  They redesigned the jumps for many characters to weaken the jumping game and make the game more on the ground than before.  It also helps anti air in online situations.”

So, some players will like them, some won’t. Some characters will suffer more than others.  This is called game balance, and I believe some things will need to be tested globally and then tweaked in the first patch.  As Frionel said, jump speed is actually character specific, so we need to test all of these out properly in a 50 character match up….  Many Choi and Clark fans complained their character was weakened, but the inverse will happen if they get buffed: more complaints as the balance is upset.  I’m happy with Clark as mid tier and Choi as extremely dangerous only in expert hands hahahaha

Some players don’t want a change.  They just want KOF98finalultimateedition or KOF13UM.  These wants are valid.  The criticisms of another game are valid.  But SNK are making a new game now, and it won’t please everyone.  It aims to please a LOT of people and I think it’s on the right track.

Have a look at this match!  Does it look like KOF gameplay to you?

Still, I will not pass judgement on KOF14 until it is finished. What I will say is that so far, the jumps do feel strange due to their speed (24 build) but I can see that this will be better for play, in terms of fighting and in terms of net play.  Street Fighter has no hops, and you still see people freezing like a rabbit in the headlights when someone jumps in, with all that time to anti air.  It’s all about the pressure, not the physics.  We need to make sure that all characters can punish the opponent that throws a fireball, and that’s what’s important, not this floaty feeling, that is something we will get used to.  I really hope that the speed of KOF14 does NOT match KOF13, it needs to be slower, for the sake of new players and for net play. Playing the 24 character build, I felt hops were exactly the same as kof 13, and that’s not good.  However if you like your games fast and furious, KOFXIV will not fail to disappoint!

Next: We’ll have the last batch of reports and talk about Sylvie in more detail in the next and hopefully final part.