#Hypespotting4 + The Future of FGC? 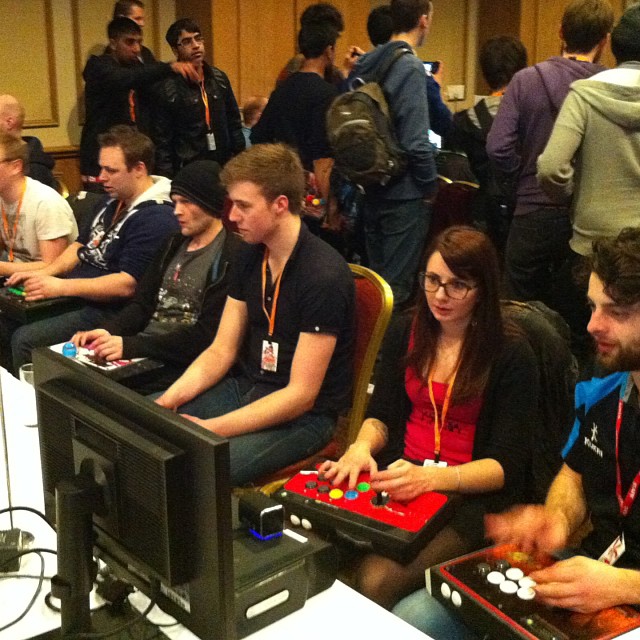 #Hypespotting4 + The Future of FGC?

Hypespotting has cemented its place as THE premier event in the UK, with a swish location, international guests and finally as a Capcom Qualifier.  The entrance badges were awesome and join my collection with rather a lot of pride hehe.

Xian (pronounced ‘Shen’) withdrew from the KOF tournament to focus fully on Ultra. Other players such as Ryan Hart & BigFool, not to mention Tokido, were on the other hand able to show their versatility, competing in both games; Tokido went on to win KOF. That said, Xian did also enter Marvel, going on to win 2nd place, Faisal Dante taking 1st.  Full brackets for all games here.

The Scottish KOF players had a good showing, with 4 placing Top 8, and had a long session with Tokido, with the veteran kindly answering questions and giving advice. Milligano came joint 9th at Ultra.

Big thank you to Walter Fraser for everything, including giving out copies of the FGC Yearbook as prizes for the pub quiz, which every year I think I’m gonna avoid because it sounds boring and then regret not being part of, as I hear the laughter while I’m playing casuals (and I knew some answers this year, and there were SNK questions!!!!).

Shout outs to ON.BigFool, TSS.Atma, David Cameron, Palladin, Samurai Pizza Ken, Abdul, Vexaxiousidler, Quaka, Sprint and Alan Wong and everyone at the KOF area of course, not to mention Tokido!  YES THERE ARE PEOPLE PLAYING KOF SO JUST GET ON STEAM!!!

It was of course nice to see Ryan, Sean & Xian again.  Banana Juice anyone?

Here are some photos I took, you can see loads more here.

Hypespotting did cause me a few thoughts, which caused me to write about the future of the FGC…

So what’s next for the Fighting Game Scene?

Some thoughts I cobbled together on what’s happening to the scene right now, in other words, money, why we need it and how it’s going to affect everyone.

First of all, I’m considering dropping the acronym FGC when promoting the scene, because ‘community’ to me feels closed, and the scene needs to be accessible, with open doors.  I feel there’s still a sense of ‘us’ versus ‘them’ while the word ‘scene’ is just there, like a park, you can just walk in and check it out.

With Mortal Kombat X just about released (14 April), Warner Bros will surely be looking to promote the game, but the summer season is about to begin with the lead up to EVO, so that may not feature much in Europe. However, there is Community Effort Orlando in June. Warner Bros spent a good deal on Injustice, with custom arcade cabinets and such, and then we have the Kombat Cup with a 20,000 Euro pot for the EU finals.  This could mean a lot of cash being pumped into events, MK and Ultra fighting over the spotlight and smaller games being squeezed into obscurity.

Yes, Cups and other league format tournaments like it, are the new business model for promoting games.  With such huge prizes on the line, the competitive fighters and those with a versatility will surely a) buy the game and b) compete for the glory.  It’s really not the latter that is the priority for the publishers.  Casual players will simply be concerned with the question of whether the game is fun and can be played online.  Game companies just want to sell as many copies as possible within that 3 week sales window, before another A-list title draws attention away.  The Fighting Game Community, while growing, is still a niche market, and while those casual players who trade in a game after 3 weeks might be regarded as ‘filthy’ or ‘fickle’, they are still a very important customer base – publishers at this point can’t rely on FGC sales to survive in a market of FPS and other games.  The FGC needs to help promote the games they like because of course new members generally come from the mainstream.

In order for the FGC to thrive, it needs money.  Money from donations would be best, as usually everyone has the same aim: for players to play games and tournaments in a comfortable venue with a stream.  However as the FGC grows larger, bigger venues are needed, with better equipment, not to mention upgrades.  This costs money.  Inviting star players costs money.  One avenue is sponsorship.  But how does this affect the event and the community?  Let’s look at some examples.

One sponsor is an electronic cigarette company.  Should organisers be promoting activities that could damage player health?   It’s not really a hard question to answer (or should that be a grey area?)  but money talks louder.  Speaking of money, did you see Red Bull Kumite?  Do you think those types of drinks are safe?  Do you think players even follow the recommended guidelines during a tournament?  That being said, Red Bull has targeted the FGC, or rather Esports, and they do make a good fit.  If you consider sports such as Monster Trucks and surfing, these kinds of audiences aren’t exactly mainstream and yet are quite targetable.  So we can have advertising!  You know, that thing that gets in the way so you turn on adblock.  But you can’t do that when it’s a video inserted as part of a stream.  And so we have adverts for sticks, pc components, cars, deodorant and things like that.  Of course Monster, the other energy drink, is sponsoring players too.

The thing is, how does an advertiser know they are getting a Return On Investment? How does Mad Catz know people are buying sticks from seeing the adverts?  Discount codes can help track this data but discount codes can get shared to random people.  How does anyone know a car was bought just from seeing the ad on a fighting game stream?  They shouldn’t but the point is exposure helps a product and 20,000 viewers is not something to turn their nose up at.  Won’t stop some advertisers not having faith however, and that’s a problem the FGC need to address, if they want that support.

One problem to consider is the independence of an organisation that has a paying sponsor.  Let’s look at what happened with RedBull Kumite.  You may have recognised various staff and stream teams but under which name did it fall under and who got all the credit?  Who got 20,000 viewers on their twitch channel?  Why, Red Bull.  And why not?  They paid for it.  But what does that mean to the team who built up a community, a stream and reputation that had their own set of values?  Is this what they call ‘selling out’?  Or is it actually in the best interests of the community?

Only the future will tell.

In the future who will even watch TV anymore?  What is the impact of streaming and Twitch’s place in all of it?  Twitch is actually sponsoring FGC events because it is aware of the future and does notice those tens of thousands of people watching.  They can get a return on all that server burning, as long as viewers aren’t all blocking the ads.  Twitch, more than ever, needs to keep an eye on events, and keep organisers loyal, because while they (and Justin.tv before them) have worked hard to get streaming off the ground (to supplement or even replace TV), other companies such as Hitbox offer the same service with less broadcasting buffer delay, which means casters and chatters can talk more in real time, for example.  Google of course, hasn’t sat around idle, and youtube can now stream in 720p 60 fps.  Youtube doesn’t have the community or a good chat function, but it’s the most device-accessible format with a subscriber base that could easily dwarf the others.  All it takes is a leap of faith.

People watch streams on their laptop, phone, desktop or tablet and even gaming device.  People are using devices such as Chromecast to stream the stream to their living room TV.  I still have no idea why a laptop isn’t plugged into the living room TV but I guess I’m just a minority.

People bet on sporting events.  These people are not a minority and Esports is no exception. The only thing holding it back is gambling law and the low turnout to make it worth the book keeper’s while.  However, certain flags have been raised to show that there is a future here.  Salty bet is probably best remembered for people bragging over their cash wins. While it’s dropped in viewing numbers, it’s still running, with 18 million views in total.  If gambling laws change, watch those virtual bucks turn into very very real notes.  Or perhaps bitcoins.  There  are other smaller sites that allow you to bet “funny money” on esports events but imagine gambling sites that allow you to bet on live events, would that be more thrilling?  Many seem to feel that way, and many of them have energy drinks and buy team merchandise.  Evolution hasn’t gone that way yet, but considering it’s held in Las Vegas….

And speaking of gambling, many IPs (Intellectual Properties) are being used by companies using to create pachinko machines, how long will it be before we see slot machines with Ryu’s face all over it? While illegal in France and some states in the US, sites like slots heaven could generate revenue for publishers and even streamers.

So what brings in more money to expand that community?  Viewers or competitors?  It’s both.  Many competitors don’t stay for casual games as soon as they lose, preferring to watch (and learn).  While streams cater for pools, when only the cream of the crop is presented, it makes for a high quality programme.  Don’t be surprised if broadcasting leads this way, with competitors being hidden in other rooms (or eliminated in previous stages held elsewhere).

Buster wolf! Is everything ok?  For the spectator? Sure! Many compared RedBull Kumite to a UFC or wrestling event.  Well of course, it’s fighting. It’s extreme, but it can still be PG13 and have people buying popcorn and paying for a ticket to be there in person.  This can only lead to growth of the scene as a whole (a community is something different).

For the player, the hardcore gamer, who wants to have casuals with international stars and others who just like playing the game, the future is … also bright.  Well, as long as there is someone who is prepared to bring their equipment to a venue where people can play together, things will be the same, but if that person is more interested in running a professional esports event, well…. it may be more difficult but if the scene is so big, everywhere will have a place to play!

If you’re interested in keeping your game and scene alive, and want to run events, check out this guide.