After a long and hard discussion, the KOF EU Community Managers and WGC have decided to aim to bring at least one of these players, in the following order:

An important message to the KOF fans:

We have looked at the polls. We have thought long and hard and discussed the matter for days.

Some of you may well be thinking that having Bala or Mad KOF is cool, but why not bring somebody new? The fact is, hype for KOF is the most important. That means we need to get maximum sign ups and interest in the event. How do you get interest? You bring famous players. Who are the most famous KOF players right now? The answer should be obvious. Everyone who saw Evo knows who they are, nomatter what game they play. That event is a landmark, a milestone in KOF history. It was the most hype event of EVO. That’s a rare thing for KOF. Serious business. So even though the question of best player might well be very debatable, the choice of who to invite is clear.

Bala has been working and training and attending all the events for KOF over the USA, he’s not a win once then run away champion. He has not just sat on his throne and gloated, he has been active in the community, helping people with combos and tactics, and streaming to answer noob questions. He showed excellent sportmanship at Evo, conceding defeat without excuse. He really wanted to come to France last year but had problems. We believe he firmly deserves another chance to come to WGC, to represent the USA, to bring the hype and raise awareness for our global KOF community.

If things work out really well, he’ll have the chance to bring glory back to the US by having a rematch with MadKOF…

We would love to bring all the famous players, but there just isn’t enough money. So let’s work together and try to achieve one goal at a time. After one goal is complete, then and only then can we try to bring another.

We need donations to fund travel and accomodation. These players have worked hard to become the best at the game you love. Help them achieve their dreams. Help us make KOF even more famous than before. The hype does work, I’ve met many players who picked up KOF just because they heard and then watched the finals at EVO. 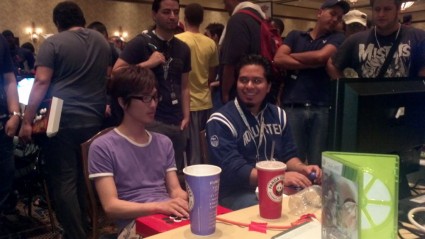