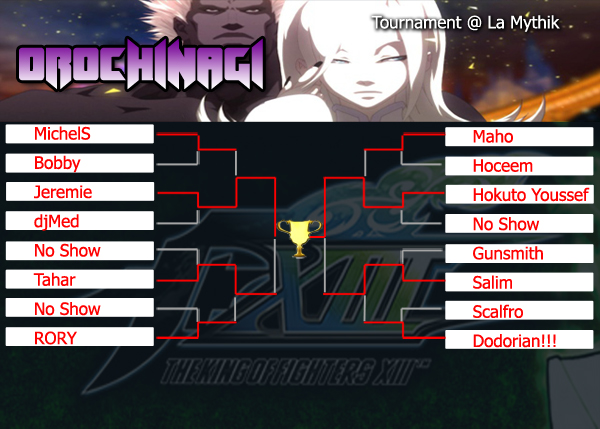 Playlist link if the above doesn’t work

Or if you wanted to skip straight to the finals:

Hokuto Yousseff had the advantage having had some good practice but Jeremie knows his KOF well, easily pulling out 2k2 style cancels.

The finals were best of 5.? In the end, Yousseff’s Leona took the match with fantastic guard breaking and crossup combos.? Congratulations/Felicitation/Omedetou!

Gunsmith and RORY were knocked out at the 1st round, having to face favourites Salim (Hey I didn’t totally throw it) and Tahar.? Michels made it through to the 2nd round, only to face Jeremie and a Maxima that had been so far kept out of sight!? Tactics!!!

Analysis: Gunsmith and RORY need to learn XIII combos.? MichelS needs practice against Maxima.? MichelS also needs to think about distance, safety and using stand A to counter Iori jump D spam.? He should take valium, if it will stop him panicking in the corner.? Being in the corner is not a bad thing.? You just need to block until you’re ready to DP.? The opponent will jump, poke, and then have to jump at you again or wait.? As long as you have a good reaction speed, you’ll be okay.? The thing with valium is that it makes you drowsy, so… maybe that’s not such a good idea XD