If you didn’t know, Xiaohai means little boy, and he was given this name as he started playing KOF at the age of 6.
Wawa also started rather young but well, neither of them are little boys anymore! Let’s see how it went down at Cannes

Thanks to MTK.Youssef for the video!!!

We had a tournament to help with the fundraising, here you can catch the replay with timestamps, and check that lovely 720HD 60 fps on YOUTUBE!

Live with Alan aka ‘The Gunsmith’!

Grudgematches until the end!
3:35:54 General vs Jerome

If you liked the show please please help our player get to Korea! Make a donation!

This week we had 3 full days of streaming to support!!!

Allright crew! Stuff is happening! Here’s a few things that are happening in the near future and the current situation in our community:
1. Lonestar Admonition II. Without your continued support, this wouldn’t even be possible. Luis Cha and Misterio are confirmed for the event so we need to train up in order to show them a good time so that in future events (KoF XIV), they actually initiate the talks into coming for our event. I really need as many members of the TKC to show up and support! This is your event!
2. We’re kicking off the DreamCancel cup.

Go HERE and get more info! 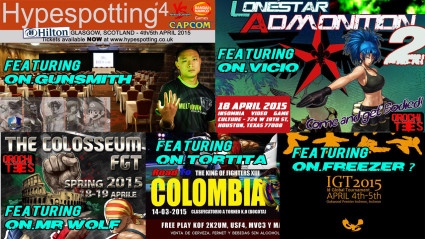