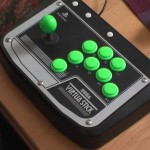 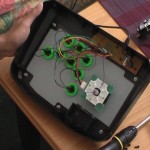 As you can see, the original Virtua Stick has snap in buttons and a stick with 5 pin plug, all easily replacable although I haven’t checked to see if the stick can be easily swapped for a sanwa (update- no it cannot-?you’ll need to drill holes for?a?Sanwa stick but the stock stick is a Seimitsu LS-33).

The clone on the other hand is a complete mess. Lots of glue trails, crappy stick and mushy buttons plus a rumble function!?

Let’s see if we can clean this up.? The great thing about this clone, is that the casing is exactly that- a clone- I could put in a Seimitsu stick without any drilling.? Stick modding is easy, once you understand that it’s basically a load of switches attached to a motherboard. When a switch clicks, the motherboard sends the signal to the console/pc. All you’re doing is replacing the switches. Leave the motherboard well alone! Unless you want to replace it with say a 360 pad ‘motherboard’… 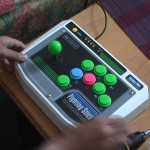 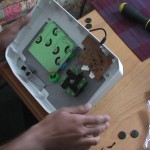 Things you will ultimately need (just in case) for a full mod: 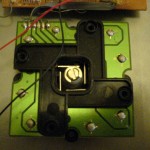 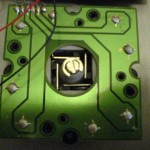 After opening the case, we find the stick, with no plug and a small pcb. This square green board merely replaces all the need for wiring. It isn’t actually necessary, but of course then you’d have to wire up all the stick switches manually. If you look at the top right you can see the board connectors (solderable tabs). On the underside, the board was actually marked to tell you which connector went to which switch. There were six: ‘V’ Up Down Left Right and another ‘V’ – ‘V’ I assumed to be ground. You may find more than one ground – it is important to have at least one connected. 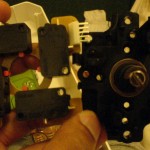 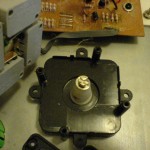 stick after switches lifted off

After removing the plastic plate, the pcb will pop off, revealing the microswitches.? At this point you could replace the switches.? If the stick has no lag (ie. empty space when you pull in a direction before it actually hits the switch) then that should be enough.

However, I hated the stick and didn’t trust the switches, so I chucked em both.? Then you’re left with the stick and a plastic holder.? I actually started ripping into this with a pair of clippers and a screwdriver before I realised they had to be screwed in from the top.? But where were the screws?? Aha.? After unscrewing pretty much everything and lifting off the plate I tried to see if I could peel off the top layer of plastic.? You can.? Underneath lies the screws that hold that plastic mould for the stick in place. 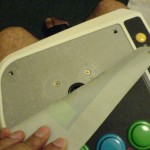 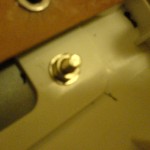 The only thing keeping in the stick now was the little ‘C’ shaped piece of metal at the base of the stick. This was deceptive. With most sticks, you screw the bottom to unscrew the ball off the top. Not so here- IT’S NOT A SCREW. I pretty much threaded it trying to ‘unscrew’ it. All you have to do is pull down the white plastic cone around the stick, which you’ll find is on a spring, and pull out the metal ‘C’ part.

Out goes the stick. (This stick is the same as hori EX2).? I have lots of links to tutorials, just ask if you need! 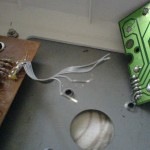 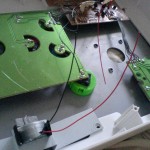 After having noted where the wires go to the connectors on the pcb with a camera shot or two, I snipped em.? Uh rumble on a stick?? Maye some people like that but it’s not for me!? Snip.

I then checked the stick was still working by plugging it into a usb adapter and running the control panel game controllers menu.

Yup, so even though the rumble wires were dangling, the buttons were still ok. Perhaps not exactly safe, but if it works… 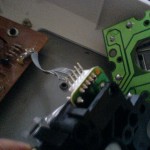 The next test was to make sure the new stick would work.? (After disconnecting the stick from usb) I looped the ground wire from the board to the ground prong on the stick plug (On the Sanwa JLF, look at the image, it’s the prong furthest to the right).? Then hooked a random direction wire over one of the prongs.? Plugged it back in and… hey presto!? One direction is registering.? All I have to do now is…. drill the case.? The Sanwa stick doesn’t fit exactly into the case.? On the other hand I could drill holes into the sanwa so it would simply screw right in, but to be honest I’m scared that the holes would be too close to the ones on the sanwa, meaning a risk of the holes merging and creating a mess I can’t get out of.

The holes from the last drill have left a raised surface so while I could balance the stick on top, I should dremmel these down.

I’ll update this after I get that drill!

– So I got the drill!? I got so excited I ended up drilling both the clone and the original stick.? However, I have discovered that the Sanwa is quite a loose stick.? Perhaps nice for 360 grabs but perhaps not so good for KOF, in my opinion.? Again, it’s your preference really.

The Sanwa stick is also too tall if you simply screw it in, so instead?of?dremelling the impressions left by the screws for the Seimitsu, I left them and?lowered the stick by adding some?nuts.? It’s nice… but I think I’ll sell it!? It has the same feel as the Madcatz SF Tournament Edition stick… high quality, but a bit too loose for me.

Back to the clone.? I desoldered the pcb from the base, realising I needed a solder sucker to get the damn thing off.? Improvising, I turned the pcb upside down and let gravity do the work.? With the solder mostly removed, the pcb came off and I had access to the buttons (don’t worry, pics coming).? The plate was now able to be removed.? The good: the holes for the buttons were slightly customised- they had tabs for grooves in the buttons so they could be put in at the right angle to go through the pcb.? The bad: well i don’t want these buttons at all, and the virtua stick uses 28mm buttons, so for Sanwa I’d have to dremel.

For now, what I really wanted to do was practice making artwork, so I measured up the plate against an A4 sheet of paper.? Luckily there seems to be plenty of space!? I found a template, which unfortunately wasn’t to scale, but it gave me a decent idea of where the buttons and holes would be.? So then I printed out some quick work using the borderless setting and got to cutting it up with a scalpel.

Here’s how it looks so far: 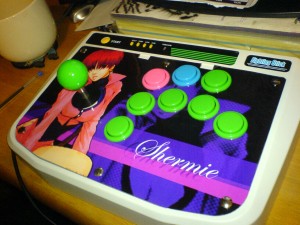