Was pondering how to keep an update on custom stick worklog in one neat place instead of clogging up the arcade stick thread. So I thought my own worklog thread will be a great place to update progress on some sticks i’ve got coming up with pics and also create some short modding tutorials that might help people beginning to mod and help answer any questions if I can.

I’d also like to throw ideas out. Might put some of my favourite customs i’ve seen. Also posting some ideas on art schemes and templates i’ve got in mind. I’ll try and update bandwidth-expired pics should they delete in the future, but it will mostly be thumbnails to avoid that.

I have a youtube channel where you can check out some past work from last year and the year before: http://www.youtube.com/user/gig4d

If you’re interested in how LED’s are placed in Seimitsu buttons, I find the most convenient way for me is to simply drill the required hole in place and inserting the LED in. This gives the LED the vertical viewing angle required for optimum brightness and viewing angle.

3mm hole for a 3mm LED at the edge of the button. You shouldn’t drill this hole where the tabs on the microswitch go to release it from the main body.

Once you’ve drilled the hole there are several ways to think about wiring up your LED’s. There are alot of wires and you have a choice on how to attach everything to your LED board. I find a cheap and effective method is to use either barrier strips or quick disconnects (bullet terminal variants) which you can access mostly anywhere. Online has the cheapest deals I find.

You can use more traditional methods but it’s always safe to have something detachable wiring from the LED and the circuit. In my case using this method this is required because the leds are fixed in place in the holes with a small amount of super glue.

If you’re familiar with crimping then all this is straightforward.

You may be wondering does this work on 24mm buttons? Yes indeed: 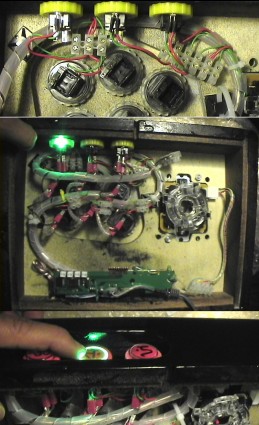 This is a green LED for Seimitsu 24mm buttons (start back guide) using a barrier strip method for the wiring. 3mm fit in perfectly, just be careful with drilling not to make mistakes as there’s not much room for error.

I find the best buttons for lights are the clear/ labelled as “white” Seimitsu PS-14-KN buttons. Most ppl think having blue PS-14-KN’s with blue LED’s would be better, I tend to disagree and prefer maximum light by using clears. But that’s all preference since they may want to consider the art scheme to match the coloured buttons.

common ground so use any which is available either the black wires on the usb solder points or any of the other grounds, the +5volts is the solder point with the red wire. Datels are great to mod, very cheap and effective minus the headset port, but you can always use a wireless headset.

On another note, plexi tops on sticks. Forming plexi tops for sticks is relatively straightforward to understand, you just need the tools.

Did this one for a custom art scheme someone wanted to put on a Tekken6 wireless case. The art has yet to be placed, the one there is stock.

The buttons are placeholders for a different set. It’s a 7 button layout so the art will cover the remaining button. T6 wireless are hard to mod, 28mm buttons and a sanwa won’t fit without heavy modding.

Mounting a JLF stick into a low depth stick:

You can mount a JLF into a stick which has enough depth to simply lower the stick with appropriate spacers (i.e. nuts and washers will suffice) to achieve the correct height of the stick. Simply make the holes for the mounting plate and mount the height as you wish.

On small sticks with no room to lower the stick with spacers you can simply mount the stick by removing the mounting plate and using the holes on the black housing to mount. A short shaft is then used in place of the default sanwa shaft to achieve the correct height.

1 Use the dremel to grind away the areas to fit the stick flush with the case/ 3rd picture down shows the black housing mounted flush onto the case – notice the areas grinded away.

4 assemble the new shorter shaft (usually Hori) into the sanwa stick and you will find it will not be touching the bottom of the case and be the correct height/ first picture shows the shafts from a datel (fight with a neighbors dog*), hori shaft and a stock sanwa shaft.

There is already a guide, but I find this way allows to achieve the same results without cutting away parts and drilling holes of the actual JLF stick. Nor do you have to grind away at the base of the stick. Here is the other guide i’m referring to:

* you cannot remove Datel stick ball tops, they’re not threaded just glued permanently. I used an angle grinder to find out. You can still use it with some work involving a tap and die set and grub screws if you have the inclination.

Done this some time ago for someone on another forum, hori stock stick replaced with new buttons and a jlf stick. Black vynil on top.

^ Click for bigger pics. Someone wanted a 360 and PS2 dual mod on another forum; came across a gear stick in vgood condition so used that.

So I have a T4 stick with a nice black finish on the metal top plate. Don’t know exactly what to do with it, but I think i’m gonna make it a cheap dual mod. . . I only have one cthulhu and fightpad left so i’ll use it in this before getting more datels. Don’t feel like putting plexi on top since the black finish feels and looks great.

I’ve already put a sanwa stick in and I have dark hai buttons and a black ball top which I think will go well with it.

Got the dual mod done, now just to wire everything up.

Gonna change the buttons to dark hai sanwas instead of green but up to whoever if they want other colors. 360 Headset was pretty straightforward, last cthulhu i’ve got atm, might get some more but prefer datels for the ease of use.

Might post up a set of PCB hacking pictures with different configurations for display/questions later on in the week.

^ clik for bigger, came out better than expected. Internals not finished yet but will post up pics soon.

You have to grind the holes since they’re 28.5mm and not 30mm required for sanwa buttons like most of these kinds of sticks. You can use a dremel with and aluminum-oxide grinding bit to get the job done.

Heres a way of mounting a Datel pcb (PS3 and 360 compatible) inside a TE stick, it fits out of view since it’s so small. It only costs ?30 too.

Got a mint condition Namco painted, I painted one before but never got any good results with the paint I used. So I got someone to paint it for me with Vynil dye and I am very pleased with this paint. Lots of tips on how to paint in general via google so if your interested take a look at them before taking the plunge.

You can get the paint at:

It comes in red/black/blue and costs ?9.99. I might try it myself on some other sticks. The same type of paint is used for this black datel I made and it looks good: