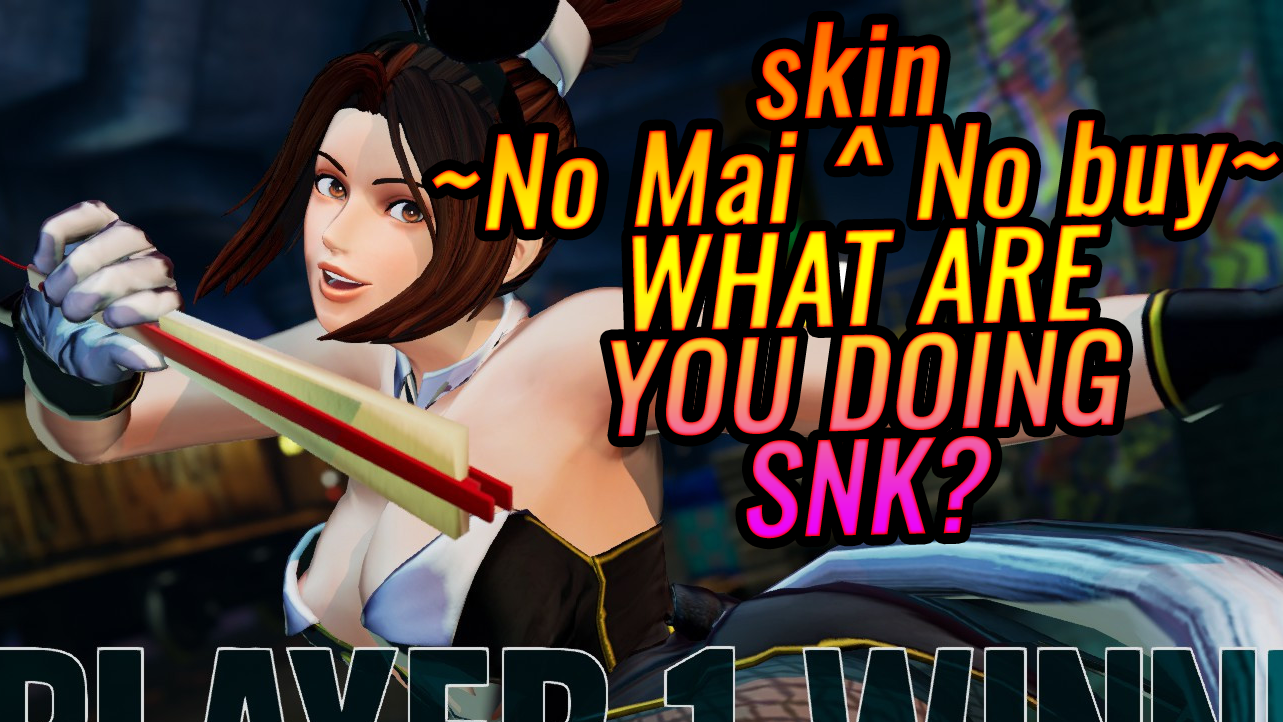 Edited to add a point about eSports support and ICFC. Poll to be added tomorrow.

During a stream we got into the current state of kofxv and the lack of skins. The reasons may be more complicated than we think. The main question is why doesn’t Mai have a skin? Is SNK throwing away an opportunity to make money?

It’s easy to complain, and to imagine that a dev in SNK is ‘stupid’ or “doesn’t know what they are doing” but when we think a little bit more about the situation, it might be more understandable.

The first thing is to consider is whether skins even sell.  This might seem like a no-brainer but let’s take a look at KOF14. They gave away Kyo and Athena’s skin for 1 week and then Iori’s skin but iirc that wasn’t free at all (smart tbh).  But did they actually sell?  Did not every KOF fan immediately grab Kyo and Athena’s for free and then pay for Iori’s?  Surely?  But then why didn’t we have a Mai skin?  Then we had Angel, Sylvie, Kula, Shun Ei and Meitenkun.  Why?  SNK has the data but they aren’t sharing it as yet.  As pointed out, it may be that Kula is as popular if not more popular than Mai with some audiences.  As for the newcomers, I would suppose that SNK was trying to build their popularity; this is where we can postulate all day, we’ll probably never know the real truth behind the reason but the real reason could simply be developers had to prioritise other things such as the next DLC characters and even Samurai Shodown.

But even there.. there are questions.  Samsho got a few skins: the pre-order “retro” skins for Haohmaru, Genjuro and Nakoruru.  These were cool and aimed at the hardcore fans.  But there were a couple of collaboration skins but only available in the East!  Perhaps this was out of SNK’s control.  But back to KOF.

So we’re here with KOFXV and the playerbase that remains is not really complaining about the game, rather Krohnen and Kula’s top tier-ness.  Otherwise the game is great and very likely going to be my second favourite of all time.  But there’s no still no Mai skin.  Neither a Kula skin.  There is a Terry MOTW and Leona skin.  Why?

I think it's hard for you to imagine, I went back to SNK to complete GAROU.

Coincidence?  Maybe?  Or maybe the SNK team is playing favourites, and we can see the set up for a Southtown spin off game in KOFXV’s roster.  This isn’t a bad thing, it’s great for SNK to have more than one franchise, although there is a little issue with dividing the playerbase.  If you want to be competitive at Samsho, KOF and MOW, it’s going to be a bit frustrating and the danger is that we may be getting closer to a market saturation.  At the same time, no, not really, nothing comes close the “first impact” when the FG bubble literally popped.  There were simply far too many games competing for space at the time.  It’s nothing like that now.  However, now, SNK will have to go up against SF6 and T8, and that’s still more than enough in an age where their older playerbase has even less time and many more distractions from other games, F2Ps and FPSs, not to mention the mobile game industry.

My point still remains that skins should sell, and even Kula, if not Mai skins should sell and give SNK the funding they need to create MOW2 and KOF16.  We already mentioned how an arcade fighting game is not really enough and SF6 answered that with an open world game package.  To compete with this, SNK needs to create more (an open world Southtown like the Yakuza series? OMG YES), and that takes funding.  But perhaps something is wrong and fans don’t want to buy skins.  One point was that SNK now has new funding, but that’s more complex, as shareholders can influence how a company spends its money – in order to get more profit, not specifically to give it more money!  We don’t know anything about this, so we can only speculate.

There is also the point that SNK has spent a lot of money supporting the tournament scene with eSports programme, the SNK World Cup, NGWT and now ICFC.  Perhaps they have seen that this directly leads to more game sales, and in that way is more profitable than working on skins.  Difficult to gauge.  What is clear though is that these events definitely bring hype and cheer within the current playerbase and btw, a Yamazaki, Geese and Gato team was in the NA finals!

For some reason they’ve disabled other sites playing the video, so here is the link to the EU grand finals.

In the end, I don’t have the data about skin sales, but I have a few replies that show players are supportive and happy to buy skins; while Capcom seems to profit from a million Chun Li skins, I have to ask, are we that different?

How do you feel about more kofxv skins?

Just in, SNK has announced they will be present at EVO with SNK Sound Team, plus a booth to try out the new Orochi Team DLC!  Now that it’s no longer a secret, will they run a trailer to announce something else? Maybe not, and we are still waiting for matchmaking improvements but at least there is more content!  Let’s hope for success and better things to follow.  Is it wise to add new skins, well, that’s SNK’s decision.