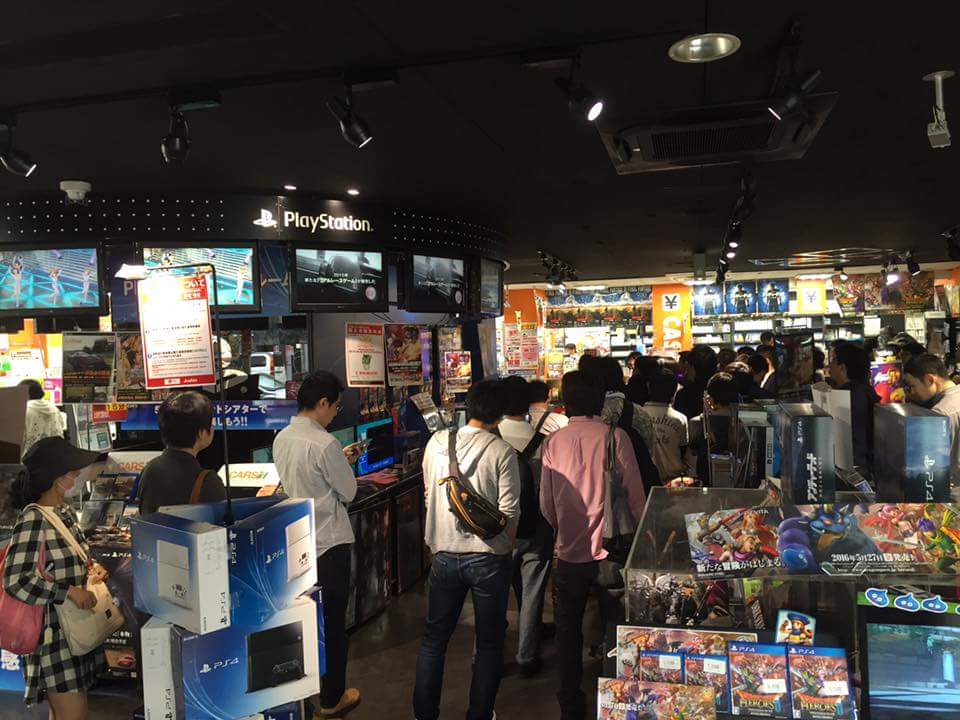 On Saturday the 4th June, KOFXIV was on demonstration in Sofmap, Osaka.

“I was within the first 50 players in the queue. I waited 2h30 to get my go, and I was getting really tired as I had to leave in 30 minutes. From what I could see, everyone was picking the same characters so it wasn’t interesting to record footage.  However, the build seemed to be more recent! For the other players, it seemed like waiting 3 hours was nothing. I tried Joe, Terry and Nakoruru. Joe is very cool but Nakoruru doesn’t feel like a KOF character. I became a zombie after waiting so long and can’t say much more sorry!”

While we have to wonder if he never played CVS, there is a tiny clip of him playing here:

Next, the Japanese players gave some feedback over Twitter, I’ll translate a few with the usual disclaimer that my Japanese is quite basic:

The modelling on Yuri is cute but there’s more filters and textures on Robert, it seems.

Staff was on hand to give the event more atmosphere!

Mamahaha was up in the sky helping with security!

Sofmap will be offering this PS4 theme (still under construction) with their pre orders.

KOF14 developer Neo G, famous for his work on Third Strike, was also on hand, thanking everyone for coming.  He has been reading tweets, including those with criticisms.

There was also a little cosplay too!

Keykako travelled down from Tokyo, having already played the 36 character build there!  He noted a good number of happy players.

He also noted that Sylie’s Climax was different.  He didn’t find many players complaining about the lag on one of the monitors (lol).  He’s really looking forward to real test of the arcade mode.  Kukri’s crumbling sand move seems very slow (30F) but also strong (able to block each side?).

User Zakkyun29 was expecting Mai and boobs everywhere but just like in Tokyo, noted many female players were interested in “Sakamoto”.  Lots of people picking Yuri, Nakoruru & Athena. Thanks to Ayane (pictured?)!

Ura Jackal was one player happy to knock out Hein, using Billy and taunting  him that ‘(Geese’s) recruits are adults with the proper paperwork’.

After release of KOF XIV, I will upload videos including guidances, lectures and casual matches of it to Niconico-douga and youtube.

He will be opening a new account and uploading lots of matches and tutorials.

We recently had a security breach and advertising code had been injected into various posts.  It has all been cleaned and vulnerabilities closed.  We apologize for any inconvenience caused.

As for updates, we will not be expanding or reposting minor news from the KOF community on Twitter – so please follow us on Twitter for the latest tidbits and artworks!  It’s the quickest platform for updates!