More details & video from the #KOFXIV Presentation at Esports Square 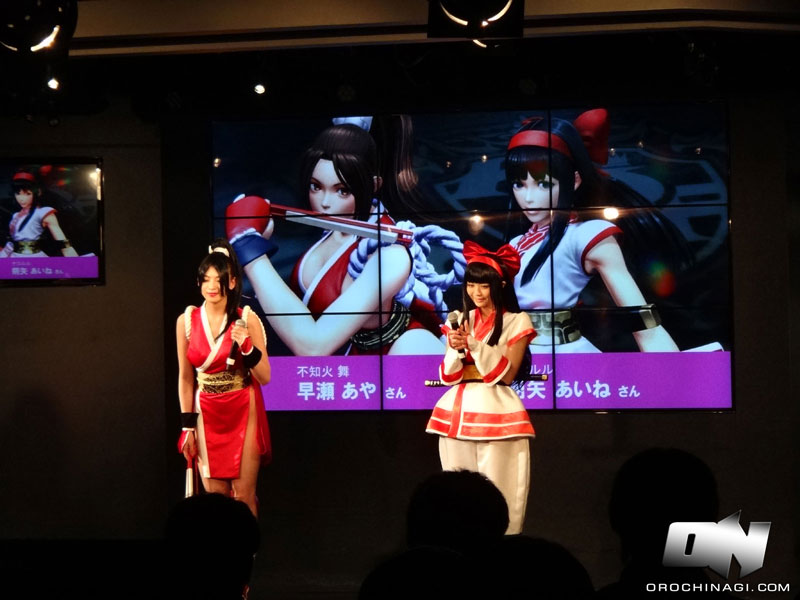 More details & video from the #KOFXIV Presentation at Esports Square

Here’s an exclusive report, photos and a video from the event! If you’ve ever wondered what it’s like to drown in a pool of KOF news, welcome to the wonderful world of Monday the 25th April. This was the day of the SNK KOFXIV press conference and Stream at Esports Square in Akihabara.  The past day has been like a flood at Orochinagi and we’ve been going nuts over everything that people have been reporting.

Now we’re ready to throw some additional stuff that we’ve got from covering the event too. We promise you won’t be bored– c’mon, read on. None of it is PREDICTABO! [Bringing back the SNK Legacy]

The corporate logo change isn’t a gimmick– it’s a declaration.
SNK is returning to its roots as a videogame maker. No more pachislot. It’s all videogames from now on.

The announcement was greeted with a huge applause when president Koichi Sotoyama made his presentation on stage. No doubt that the local fans in Japan wanted the old SNK back just like everyone else in the world. SNK themselves knows that their old logo has better global recognition, which should help them in releasing games and expand their licensing business throughout the world.

Now, on to the more juicy tidbits on KOF XIV! — We’ve already been told numerous times that KOFXIV is going to be a new saga, and we can now confirm that the saga won’t conclude with just this one game. The devs aren’t solid on it yet, but they revealed on stage that the current plan is to make it a trilogy just like all the past chapters in the KOF series. [That Dinosaur… he used to be a Griffon.]

Does the King of Dinosaurs look familiar? He should if you’ve ever played Garou:MOTW, but the devs of KOF14 jokingly kept on saying that they’re unrelated to each other. In KOF14, The King of Dinosaurs is supposed to be a popular wrestler in Mexico with original moves like the Zet’s Met’s Hurricane, which means ‘Extinction Hurricane’ in Japanese. Did it sound in the trailers like Justice Hurricane to you? Surely you need to get your ears fixed. On a side note, we tried him out at the event and we were stunned at how slow he dashes. No wonder Dinosaurs couldn’t run away from extinction.

[They actually revealed the boss already?]

The devs at SNK apparently realized that there’s no use hiding Antonov when his name is all over the game. In terms of storyline, this is actually the first time that a KOF host is sending invite letters to KOF participants without hiding his name behind an initial. [Are Kim’s new teammates just like what the rumors said?]

Remember the rumors about Kim teaming up with his teacher and the teacher’s wife in KOF14? Well the SNK devs confirmed during their presentation that Gang-il is in fact Kim’s sensei, but there wasn’t anything said that confirmed if he’s actually married to Luong. As it turns out, Gang-il is apparently quite the womanizer and he tries to pick up ladies wherever he goes around the world. And for some reason (which we hope will get explained), he ended up succeeding in picking up Luong. That sort of explains her existence in the team even though she’s seemingly Vietnamese judging from her name. [Who in the world is that blue Rasputin in the villains team?]

There wasn’t much detail given on the new guy Xanadu but according to the devs, he’s supposed to be a real badass who’s been locked away in the underground prison, sort of like a legendary criminal. [So what about that new girl in the South America team?]

The devs didn’t offer much background on her during the presentation, but she reportedly fights in a “bright festive manner that feels like South American, always in the air”. They also clarified that her Brazilian Ninja teammate is sort of a weaboo; he’s a normal person who’s really into ninjas, and he created his own Brazilian Ninjutsu fighting style. Whenever he does tricks like multiplying, he’s actually doing them through raw physical movement, not through any Ninjitsu skills. [So the new protagonist is that kid in the China team?]

Whether he’ll get enough recognition by fans to be appreciated as a new hero is something we’ll need to wait and see, but as far as the new storyline goes in KOFXIV, the devs confirmed during presentation that Shun’ei will be the protagonist. In KOF14’s storyline, Shun’ei and Meitenkun are Tung’s last disciples. That also pops up the question, “Are they going to be involved with the Psycho Soldier team in the storyline?”, but needless to say the dev’s reactions were an enigmatic “Hummm…” [What’s up with that Another World Team?]

Basically it’s a pachislot team.  All three characters including Nakoruru are popular girls from SNK’s Pachislot titles back when their pachi department was still in business. The devs explained that Alice in the Woman’s fighter team is also from the Fatal Fury pachislots and she was particularly popular. Alice was originally an easter egg in Real Bout Special, but she was redesigned and reborn as a separate character for the pachislot series. [What about Ash and his teammates?]

The pimple-faced protagonist of KOF13 disappeared in its ending, but will he be making a comeback? That was certainly one of the questions that the host Mitsuhiro Ichiki asked the devs on stage, but as expected their reply was enigmatic; “that’s certainly something that [everyone] must be wondering”. [50 characters without DLC is promised, right?]

If you hate games that gets shipped incomplete with a number of characters that are missing or incomplete, that certainly won’t be the case with KOFXIV. SNK promises that all 50 characters will be on disc so fans can just play the game by chucking it in their consoles after picking up a copy at their retailers. Of course you can also take the digital route… that is, if you’re not interested in the bonuses like the Japanese art book or American SteelBook.

[So… what about the online?]

The KOF14 presentation actually closed with the devs saying that they’re doing the final tweakings on the online stuff right now.

From what we know, there’s going to be quite a number of features that’ll make online play more exciting in KOFXIV. First and foremost is the Party Battle mode, which allows for 3 players to team up and experience a true 3on3 battle. Each player selects and fights with one character, and same characters are allowed so you won’t have to fight over your teammates to pick them. The lobby amazingly lets up to 12 people participate, and of course there’s voice and text chat. What’s more, there’s also a new feature called “Crowd SE”, which lets spectators root, applaud, and of course boo the players with sound/voice effects. You can set your profile details to be public/private, which should be a welcoming feature for players that aren’t necessarily fond of showing off their stats.

There’s also going to be an online training mode, which is one of the main features that many of the more recent fighting games are adapting. The devs mentioned during presentation that they’ll be implementing something that’ll make advanced players prone to help out beginners. We’re certainly looking forward to how that’s going to be done.

[That Hori Stick! That artwork?]

The artwork is still tentative, so be on the lookout as the days go by. We hear ya. So here it goes, a photo of the Japanese NeoGeo gals to close off this article. US, Canadian and Japanese pre-orders are open!  At the moment you’ll have to choose between the Japanese Artbook and Skin versus the American Steelbook!

Here is our video from the event!

SNK is currently offering a free KOFXIV wallpaper from their site, which may explain why it’s slow to access at the moment.  Please try again later.

Now here are the rest of the photos from the event.

ON.Kusojiji was also there and posted his own report, so check that out too!