– Starts SUNDAY around 14:00 GMT: Who will win the trip to USA for the international grand tournament?? Stream link below.

You may remember Fidoskin playing GGXRD, UNIEL and KOF13. He was recently responsible for this hype clip:

He was also interviewed recently, in the lead up to the MKX regional qualifier; here are some highlights:

*Note: article has been edited by someone who doesn’t know MK and Russian and there may be mistakes about the technical aspects of MK gameplay.

Hello Fidoskin! Please introduce yourself to our readers.
Hi, my name is Fedor, I live in Moscow, I love anime, fighting games and kittens!

You always place high in various tournaments, how much do you train for this?
When the game is very new for me, I keep working and gradually I understand how to play it. I train in the evening after work for about 3-4 hours. Over the weekend, I can get stuck in all day, depending on the mood.

Tell us about your main playable characters.
I play Shinnok. When the game had not come out – I wanted to play for him or Quan Chi, because I have a fetish for all sorts of sorcerers, but Shinnok in the first versions was incredibly weak, and Quan Chi, though strong, was not my style. I feel comfortable playing a character who can controlled the space and has a strong defensive option. When Shinnok was a little “repaired” (ie. buffed) I started to play a lot more, and now I have much better results, even despite the fact that some of the top Russian players consider him one of the weakest or at least rather mediocre. I also like a bit of variation with Kotal Kahn, because he’s a character who is very scary when he has the opponent at a quarter screen distance. And he cuts himself and I remember 2007 :3

How do you feel about “Game Show Open” and what do you think about its future development?
I like that a lot of big companies are interested in fighting games as the cyber sport in Russia, and I will support them, whether to participate or just to watch the stream 🙂

What else would you like to see on the channels and why?
I would like to see Guilty Gear XRD because: It’s the first game that I play very seriously and I have a good chance to win :)); secondly because the game is very entertaining and third-there is a very good network code.

Have you met serious opponents during qualification, or was it Easy mode?
I played against Lar’a, which is one of the best players according to the league ESL and beat him 2-0. Then I played with a strong player in Kano – Just Observer’om who has played this game for a long time, and in the final I met the finalist of the largest in Russia MFA, Sakr0n’a. In the first match I took Balanced Kenshi because he, in my opinion, had to keep for a long time out of Kung Jin’s distance, but I badly trained combos and I did not have, perhaps, the damage to win. Then I took my main and finished the set 3-1 in my favor. I met a lot of strong opponents, but apparently they were poorly prepared for my character / style of play and literally “went around him rink,” but I’m sure that in the final stages of my chances are much lower, and I will have to train a lot.

What do you think of the CIS fighters strong opponent and why?
If we take into account the particular HIC, I think Insignis, Chen-Sek and CheapEddie are the most scary of my potential opponents. Insignis plays very well on the network, he absolutely does not respect the opponent. Often using jumps and climbs even when the enemy an advantage. I can’t do much when he’s going to throw, which is, IMHO, the best tactic when playing online. Chen-Sek is not considered a top player, but I met several times with him in the tournament and won just one round, he is completely overplaying me and always one step ahead of me.  CheapEddie simply the best player in the Mortal Kombat in the CIS. It is not always a stable result in the tournament, probably because of laziness or nerves, but he built on his great skills from MK9 in the new sequel.

I would like to say something in farewell? Can someone pass hello?
Of course! I want to say hello to my opponents in the finals ^ _ ^ Also I’d like to convey greetings to my team Orochinagi.com, but unfortunately they do not know the Russian language. Also recommend MK players to practice more and try to participate in online tournaments and in the cities, it will strongly raise your skill and give you a sea of ??new experiences. Shoutout ChERTANOVSKAJa players in Mortal Kombat and if suddenly you were wondering – see my stream on Twitch http://twitch.tv/fidoskin .

Well, Fedor, thank you very much for your time and wish you luck in the regional finals!

You can read the translation by google here and original source in Russian here.

Fidoskin’s ON profile is right here: 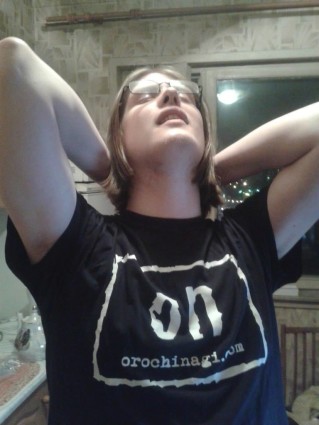 Starts SUNDAY around 14:00 GMT: Who will win the trip to USA for the international grand tournament?

Article lists the start time incorrectly but it has some more info and summaries about the players!