“BEAST BUSTERS” original game was released by SNK in 1989 as a rail shooter arcade game, and became soon a worldwide hit as the precursor of zombie shooting games. A sequel was released later in the arcades in 1998, and a console game the next year. “BEAST BUSTERS featuring KOF” is scheduled to be released in the weeks to come as the latest installment in the legendary gun shooting game series from SNK which turns 25 this year.

“BEAST BUSTERS” and “THE KING OF FIGHTERS”, legendary SNK game series are celebrating respectively their 25th and 20th anniversary this year, return in an ultimate cross over experience. Play as a member of the “Beast Busters” mercenary team or a “KOF” popular character, and shoot down all the beasts who came back to life in an exciting gun shooting game!

Learn about all the installments released until now in the “BEAST BUSTERS”  game series as well as the upcoming “BEAST BUSTERS featuring KOF”.

This Sunday! Meltdown in Paris! 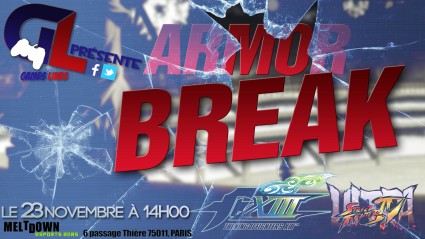