For the gaming professional who plays on 360, it’s the Hori VX SA.  Simple.   It is simply undisputed for issues, and I’ve done a lot of research.  The only thing that stops being my personal favourite is the base of the stick not being comfortable for my slender and sensitive hands.. oh stop it now, you’re making me blush.

For the not exactly flush with cash gamer who is forced to enter tournaments on both consoles or go on PSN because all his friends are there, get the Qanba QRAF4.

For the gaming professional who has godlike reflexes and hand to eye co-ordination, hey you can use any stick, because you can adapt to lag.  If the stick can register stick and button presses, it’s a win.  The MadCatz TE has lag.  HDTVs have lag.  PS3s have lag.  You don’t see Daigo or Ryan losing because of these issues.  However, I personally need all the guarantees that a stick is working because I’m just not that good.

Here’s the overall chart.  Note: The Datel Arcade Pro stick is the same as the Mayflash and Paewang.

*In the tests against the VX SA, run by HD60GD9EC, the TE lagged.

**In the tests against the Cthulhu, run GodlikeControls, the Qanba lagged.  If there’s anything that could save the Qanba, it’s the theory that the PS3 is inherently laggy when it comes to controls.  The Qanba in 360 mode theoretically should be better.

The Qanba also has issues with simultaneous button presses.  I thought it was just me but another user reported it here.  The conclusion on this so far is that the board will not forgive imprecise presses.  Others will… but I need that forgiveness!

The main sources for research were of course my own testing, discussions with modders Giga D and Gahrling, and the SRK forums.

And there you have it, the Hori VX SA is Orochinagi’s King of Sticks.

Even though, I’m going to mod my Qanba and hunt down the Fantastick… see you at the next KOS! 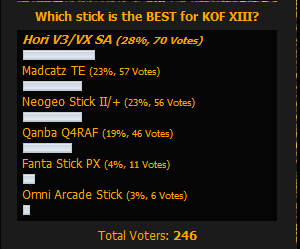