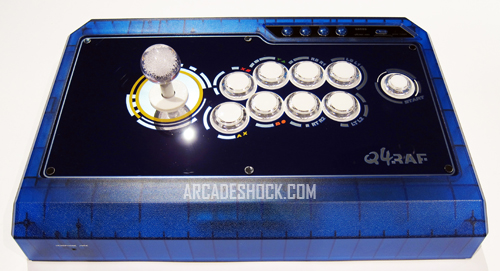 As EightArc have just announced their fusions are back in stock, I thought it high time to finish this review.  I’ve had it for a few weeks now and thanks to Qanba for supplying a copy for a review, knowing full well that I would be merciless with my opinions!

Quite a few of you will have heard of the Q4 by now, but if you’re looking for a review from someone who actually knows sticks, then you’ve come to the right place.  And of course, I’m a KOF player.  EightArc sticks are rebranded Qanbas, so the information here applies if you’re considering one. 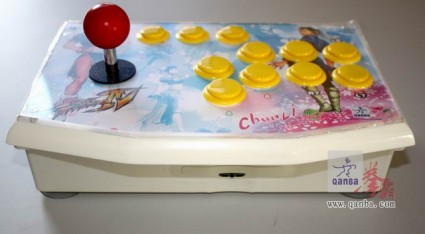 Qanba are fairly new players on the scene but set themselves from the other Chinese budget stick makers by installing Sanwa parts.

EightArc produce PS3 and Xbox versions of the stick and Qanba has a PS3 stick but the real draw is the Q4RAF 3in1, which can be used on both consoles and PC.  The Eight Arc Fusion has the same functionality.  Is it a no brainer to buy this stick?  Let’s find out.

The Qanba matches the Vewlix Cabinet layout, bar the start button being closer and having an eighth button.  As a KOF player that uses the 2×2 (as on the pad controller) layout, I find this really annoying but considering the Madcatz and Hori also use this layout, it’s not like it’s impossible to adapt to.  Players who use 3 buttons on top and 1 below should be fine while 4 in a row users will find it iffy.  I still think the buttons are too close to the stick.  I’ve noticed that older Qanba sticks had the arguably more ergonomic curve. Tsk.  If you don’t like the start button being on the main panel, the Eight Arc versions have it on the side.

When I first laid my hands on the Qanba, I was overwhelmed by a sensation that could only be summed up in one word – cheap!  All the stigma that comes with the “made in China” stamp, forgeries, child labour etc etc has left many scars and is hard to get over.  However, the stick certainly felt like Sanwa, and the buttons responded as they should.  The stick is almost horrendously heavy (3.7kg) and has a felt bottom, which is great for grip.  Saying that, I had a feeling that something would happen to the felt… and it did (see picture below). 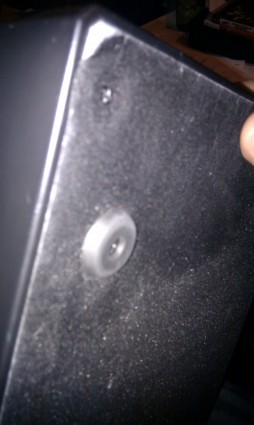 So don’t expect that felt bottom to last, or at least have some glue ready.

Like the Hori VX, the top right of the stick houses all the turbo, home, select buttons and mode (for switching change between analog and dpad) buttons.  I prefer these here rather than on the side or behind the stick.

The stick itself is your standard Sanwa JLF, which Neo-geo afficiandos may not like, however, it’s all about replicating the arcade experience and the comparitively loose Sanwa stick actually makes special moves easier to execute, in that there’s simply less effort required to pull the stick.

While comparing the sticks, an interesting discrepancy was found: the Hori V3 had a stiffer stick than the Qanba. Brand new Sanwa sticks are known to be stiff and need wearing in, but the Hori stick was markedly more stiff. Whether it will remain so cannot be known at this moment but it raises the question – are all Sanwa JLFs created equal?  Update: I have two Sanwa JLF’s straight from the shop – one is more stiff than the other, which has the same resistance as the Hori and Qanbas.  Odd, but looks to be a one off.

While the stick may feel cheap, the finish of the plastic is actually quite rugged – and unlike the Hori V3, certainly less prone to scratches.  The glossy black finish is quite nice and has helpful markings to make sure you don’t get confused between PS3 and 360 modes.  Although, I still get confused from time to time. Perhaps colours that matched the buttons from each console would have helped? 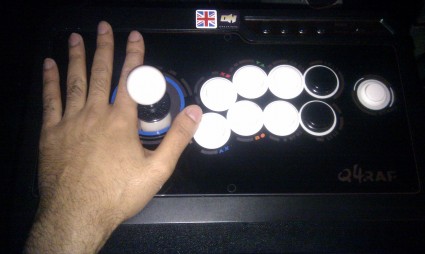 You can see there are screw slots which detract from the finish but also show Qanba know this is a stick for enthusiasts – it’s like they expect you to change the cover.

Something I found that was really odd was the angled edge on the front of the stick.  The Hori’s edge is correctly placed to rest your palm upon (but leaves my left hand sore).  From the bottom of my palm to the tip of my middle finger, my hand measures just about 19 cm.  On the Qanba, the edge is simply way out so that it could only benefit the most mammoth hands in the world, leaving me to believe it’s just for show.  At the same time that edge has a marbled plastic which would suggest it aids grip!  While baffled, in the end I personally prefer the size of the Qanba as I have yet to get any sore hands, since the surface is so large, leaving your hands to rest without any pointy bits or edges in your way.

The cable compartment seems a little tight compared to the Hori, and the cable is shorter.  The clip on the lid seems to have partly broken and while it still closes securely, I feel it’s just a matter of time before it falls off.  Cheap plastic or am I just unlucky?  Let us know if you’ve had similar problems.

The Qanba has a headphone jack, and Qanba supplies a headphone, adding to the great value of this package.  I’ll be damned if I will ever use chat to lag up my game, however.

The stick is heavy but one of the cool things about this stick is the handle.  It’s just wonderful!

Much like the Hori, only die hard Seimitsu fans would want to open up the Qanba.  There simply is no other need, apart from adding artwork. To that effect, plexiglass spares are available so all you need to do is print out your own cover and then pop the plexi on top – saying that, this certainly isn’t A4 size so you’re going to have to go to a professional printers, plus I’ve heard a lot about the plexi not exactly fitting flush.

Inside the case you’ll find the quick release buttons that can be popped out with ease.  Nothing else to say here.  Good. 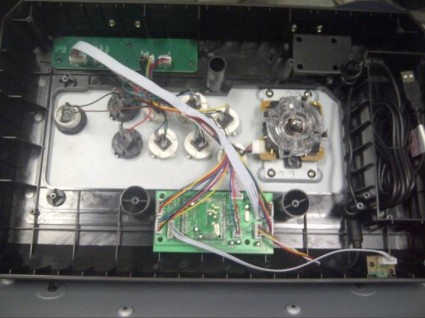 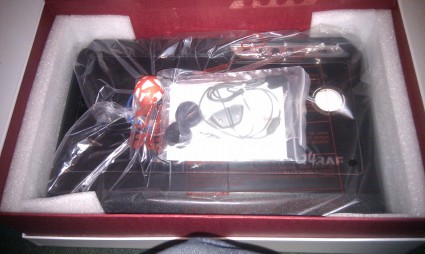 Well, I guess Qanba are looking for some sort of medal for this: they have a really nice box and I don’t know if this is standard but mine came with a photo of the eLive team SFIV winners of the Canada Cup.  If this was meant to butter me up, they didn’t research Orochinagi.com properly.  Two button plugs for your six button nutjobs along with the headphones make very good value for money, considering the cross platform capability.  Frankly the blue swirls around the buttons and stick are ok but not really impressive and the screw marks are really obvious.

The Q4RAF can be bought for $150 from our friends at Arcade Shock, but if you wanna get a really sexy one, they have a limited supply of the limited edition for $190! 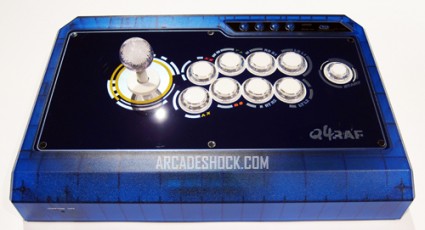 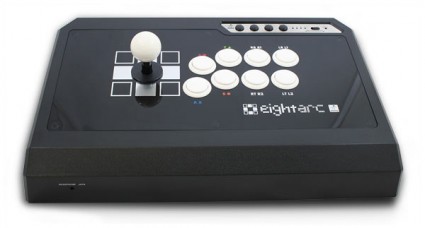 In the UK and EU, our friends at Gremlin Solutions distribute the Qanba for around £130 (that’s including VAT, which isn’t displayed on the site). 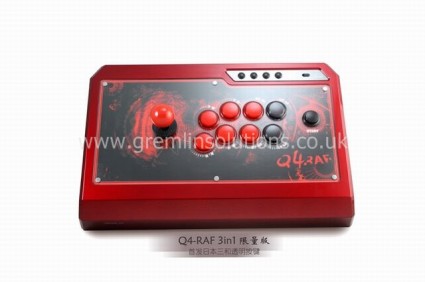 At least for the UK, the price is a killer point considering the multi platform capability.

Now I can’t prove this, but it’s starting to seem like PS3 sticks with “hold down to activate” turbo features etc are just begging for lag.  The interesting thing in Qanba’s favour is that in 360 mode, the turbo and mode buttons do not actually work.  They have mentioned that they are thinking of putting them in but I have a feeling that’s a bad idea.

As of late I’ve had no issues or heard any complaints about input latency on the Qanba but looking at the architecture I would put more trust in the 360 mode.  At this point in time, it really does seem that if you’re a hardcore tournament level player, you need to use a Hori VX or Qanba in 360 mode.  As a casual player, you won’t even notice 2 frames of lag and more than likely adapt to it by inputting your commands earlier.  You’re probably playing on a HDMI cable on a HDTV which has post processing features on it and lagging up your game like you wouldn’t believe.  But you’ve got cash to flash and just want to bang away on a big stick.  The Qanba is certainly recommended for your lazy behind.

Still a sore point for layout enthusiasts, perhaps not the stick for those paranoid about latency issues, and it’s not the best looking stick, but the Qanba is otherwise quite easily the best value stick for the FG player.  Have handle, will travel to any tournament and play any game on any console.  Time will tell if the materials really are cheap and flimsy but so far the Sanwa parts and sturdy base make for comfortable playing.

Thanks again to Qanba for the stick, which I will be giving away as a tournament prize!