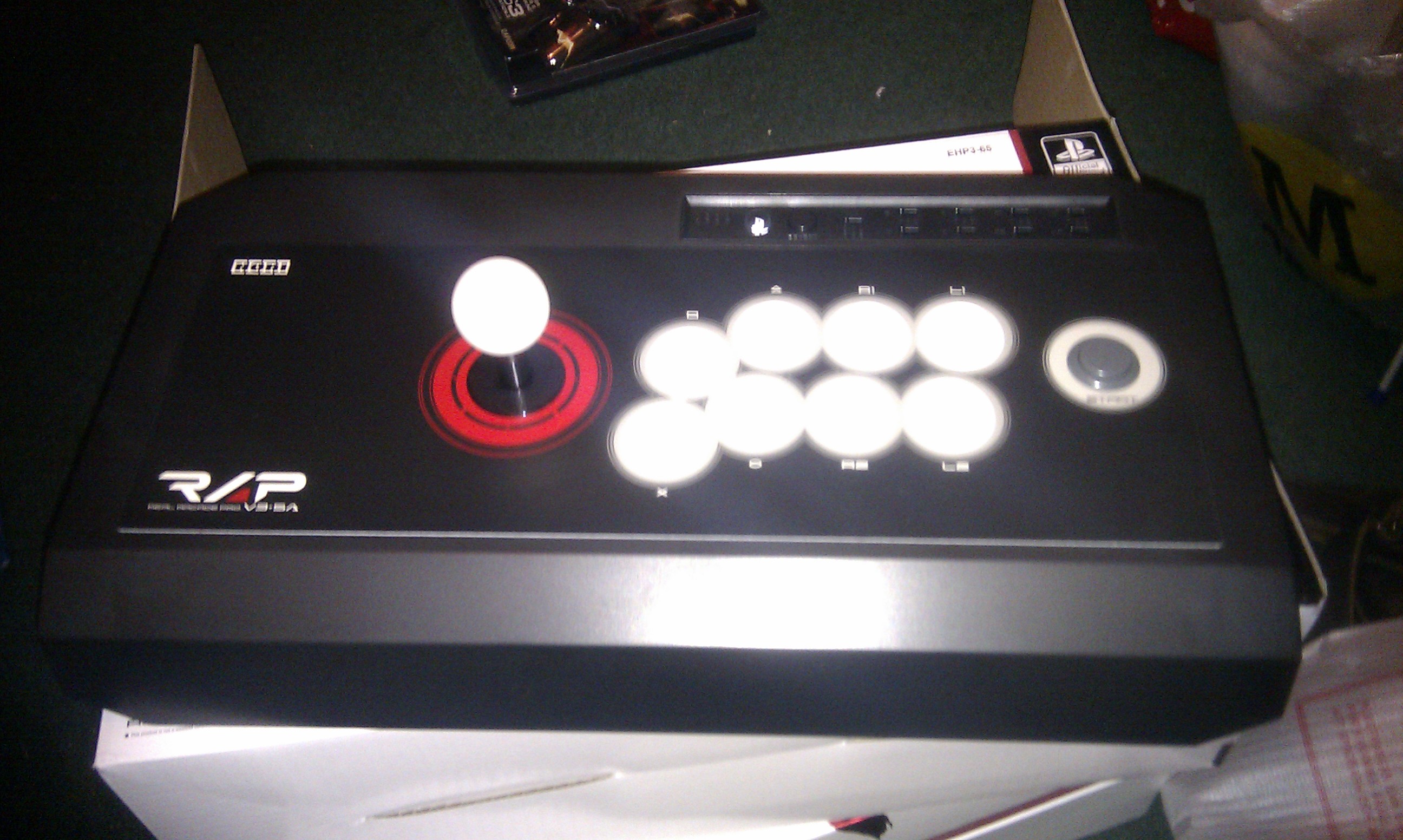 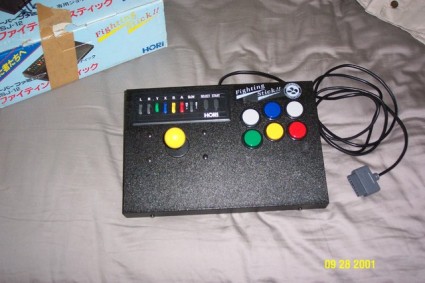 Hori have come a long way in the stick business. The Hori Fighting Stick was one of the first sticks on the market to soak up the need for Super Nintendo players who needed to shoryuken without grinding off their thumbprints.  It was a solid stick, the only complaint being the four way gate which seemed too constrictive.  Would the same thing be said now?  How players and their needs have changed!  Let’s take an in depth look at the latest offering from Hori, the Hori RAP V3 (PS3) and VX (360) SA. 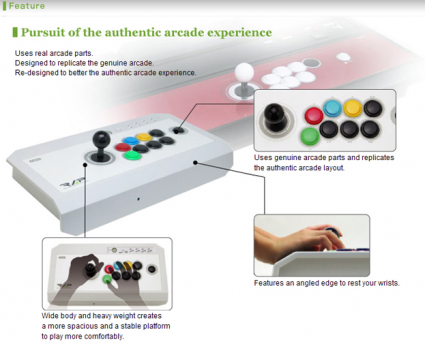 My complaint with the vewlix layout is that the buttons are too close to the stick.  KOF 2×2 players cannot switch comfortably to the middle buttons because the angle curve stops after the second column.  It’s just not ergonomic.  Having said that, the vewlix layout can be adapted to and Hyper Drive combos are no problem.

The SA in the model name stands for the Sanwa parts therein.  These are the buttons you will find in a good arcade and now in most premium sticks.  The buttons feel solidly in place and make a pleasant sound (unlike the HRAP Vewlix which emits an unnerving hollow tap echo, which causes unjustified paranoia, even though it’s built like a tank). 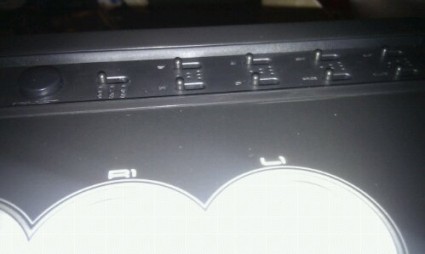 The top right of the stick houses all the turbo settings for the buttons, which for a fighting game player are unnecessary, but if you use your stick for shooters, you’ll appreciate not having to hold down buttons to activate the autofire.  It’s easy to see and feel which button is set.  There is also a switch to change between analog and dpad.

The stick itself is your standard Sanwa JLF, which Neo-geo afficiandos may not like, however, it’s all about replicating the arcade experience and the comparitively loose Sanwa stick actually makes special moves easier to execute, in that there’s simply less effort required to pull the stick.

While comparing the sticks, an interesting discrepancy was found: the Hori V3 had a stiffer stick than the Qanba.  Brand new Sanwa sticks are known to be stiff and need wearing in, but the Hori stick was markedly more stiff.  Whether it will remain so cannot be known at this moment but it raises the question – are all Sanwa JLFs created equal?

The cable compartment seems much more spacious than the Qanbas, and the Hori has a longer cable!  Nice and easy to put away.

If you were wondering, the VX does indeed have a headphone jack.

What you will find extremely comfortable is the new style angled edge to rest your palms and reduce stress on your wrists.  That is, unless, like me, you have bigger hands.  From the bottom of my palm to the tip of my middle finger, my hand measures just about 19 cm.  On the diagram you can see that the case edge is designed for the right palm to rest comfortably.  This wasindeed proven for my right hand, very nice.  However, I found that my left hand lay right on the edge and started to get sore after a good while of playing. 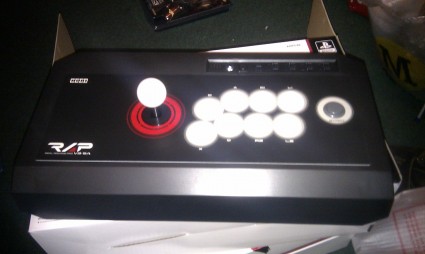 The Ps3 version of the stick gets top marks for just looking sexy straight out of the box. The VX looks, well… a bit meh, unless you like that xbox colour scheme.  Removing either cover doesn’t seem too hard, but more on that later.

Strangely, the VX has a layout that reflects a 3×1 (Button A is on the bottom row with XY and B are on the top), where the V3 mirrors the pad layout (Square Triangle on top row, X and O on the bottom).  This means 2×2 players will love the V3, and 3×1 players will adore the VX.  Players of the other persuasion will be quite irritated, and this will cause major grief at tournaments when dealing with configs, more so for the VX, because many other sticks adopt the pad (2×2) layout. 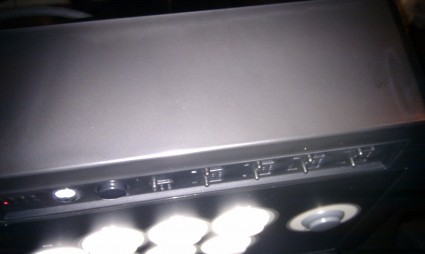 While the colouring of the V3 is sexy as hell, if you take a look at the actual casing, at least in the issue that was given to us, there are (perhaps minor) causes for alarm.  Hori is well known for its high quality (and expensive) sticks.  With the advent of the demand for Sanwa and Seimitsu parts, plus Mad Catz practically taking over the market through Street Fighter IV, Hori have had to follow the trend, leaving behind the ergonomic layout of the HRAP and no doubt greatly downsizing the manufacture of their own button and stick parts.  This must surely have affected their business, which may have led to the cutting of corners in other areas to remain competitive with prices.  Perhaps one of these areas was the material used for the V3 case:  upon closer inspection, there is evident warping in the plastic mould;  the plastic itself is quite prone to scratches – a firm scrape of a rough fingernail can leave a permanent scar.  If you take good care of your sticks, this is a minor issue, but if you are going to be carrying it around in a bag with other equipment, it will suffer – and the damage marks will break your heart.  Note that the VX doesn’t have this problem.

The stick weighs 2.2kg, considerably lighter than the Madcatz (2.9kg) and Qanba (3.7kg).  It feels comfortable on the lap with a mass heavy enough to stay steady and not to cut off the blood supply.  Frankly, it’s heavy enough.  While the case lacks an actual handle like the Qanba, it has a grip handle, which is adequate when you’re moving from set up to set up, noting that the Madcatz has nothing of the sort.  It won’t be comfortable for carrying for long distances… but then, if you’re carrying a premium stick in your hands in broad daylight… well you must live in a nice neighbourhood!

The cable is 3m (9.8ft), shorter than the TE (3.9m) and longer than the Qanba (2.8m) and doesn’t have any breakaway components but comes with a nice usb cap.  It’s long enough for any tournament set up, for your bedroom, I cannot say… but those who need to sit further back because of the glare of their 50inch TV may want to … get a smaller TV. 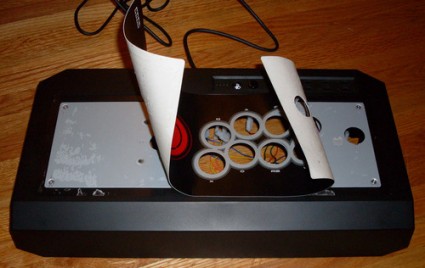 Here we can see that the front cover can be peeled off and replaced.  As you can see below, the quick disconnect buttons can easily be replaced and there is plenty of space to install a dual mod kit if you so wished.  Nice and clean. 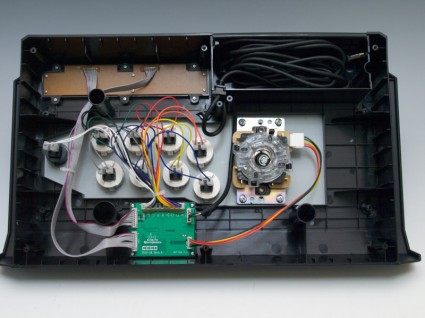 The Hori V3 currently retails at £120 while the VX goes for £115 on Amazon UK. It can be sourced on eBay for £99, if you’re willing to take the risks involved… if you’re in the US, check out Arcade Shock.

The Hori V3 looks sexier, the VX has the 3×1 layout as default and isn’t as prone to scratch marks.  The size of the stick would suit smaller hands and has a more friendly weight too.  It’s easy to repair and easy to mod.  It’s cheaper than the Qanba and MadCatz and there are special editions for UMVC3 and Arcana Heart fans.  All in all, it’s an excellent stick and while there are issues with the scratching, the V3 is the sexiest stick out there by far.  The VX may well be the most lag free stick out at the moment. 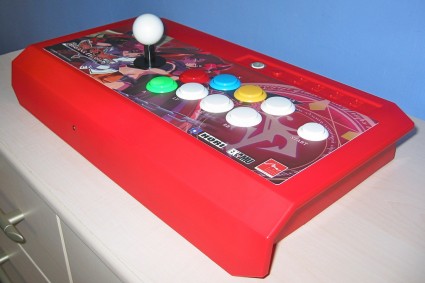 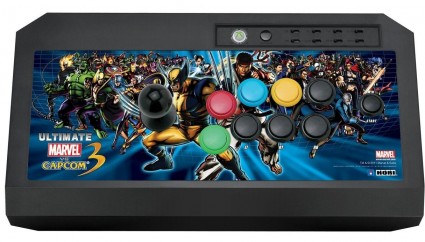 Thanks to Hori UK for the review copy, which we’ll be giving away as a prize in an upcoming tournament.

Oh wait, did you want to hear about the REALLY technical stuff?  Ok…

The Latency Issue: VX vs TE

Or lag, if you prefer.  Members of the community raised issues about MadCatz Tournament Edition sticks having latency issues.  Asking around the fighting game community, the idea was rubbished as propaganda made up by haters and swept under the carpet.  However, more digging around leads to the following discoveries:  In the video below, HD60GD9EC has set up a VX and TE to test simultaneous button presses.  Skip to 2:40 to see the shocking results.

If that wasn’t enough and the thorough attention of crazy men didn’t scare you off, how about this:

The videos themselves should be self explanatory and the descriptions can be skipped (too much text), but just to make sure to answer the basic questions first-

1. The controllers are wired together for simultaneous input.
2. It makes no difference if the 1P and 2P sides are switched.
3. The inputs by the joysticks sometimes trades hits, but the VX never loses out.
4. The reason why they randomly trade hits at times is because joysticks don’t synchronize their signals with the console.

The guy who posted these videos says that his ranking would be
RAP VX >> RAP V3 > RAP EX VLX, RAP3 VLX > TE

The conclusion is that sticks that have multiple features such as analogue to dpad or holding down a button for turbo create input latency/lag.  Ideally you want a stick that only has a mechanism for registering button presses.

The thing about the VX is that, its rapid button settings are classic switches, and it also doesn’t have a hat switch. Things are kept simple on it.  The switch that changes the analogue to d pad is the only reason the V3 is inferior to the VX.

Thanks to Professor, Gahrling and Giga D for their input.  But it’s not over.  Stay tuned for the head to head battle….