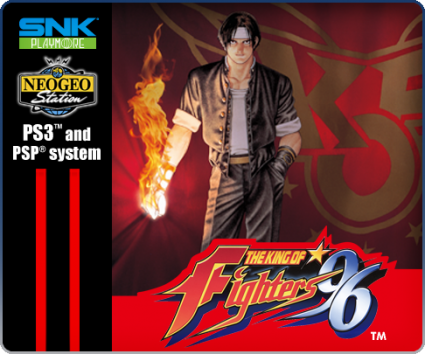 Here at Orochinagi HQ, we’ve been playing The King of Fighters ’95, impressed with the netcode and some of the crazy players we’ve seen online. However, there was this looming feeling that it was a temporary measure, a quick blast from the past, filler for the yawning gap in waiting for a certain something else.  Yes, of course, we’re talking about the King of Fighters ’98.  Actually, it’s quite hard to joke about that.  Many fans still haven’t played KOF XIII, and some may prefer to remain ‘old skool’, the NGS (Neo Geo Station) releases giving them the opportunity to relive those moments (some almost terrifying) of nostalgia.  KOF ’96 marks the huge transition from dodge attack and projectile warfare to the short range attack, roll, hop and rushdown type gameplay that is KOF.

We presume you don’t need explanations of the 3 vs 3 system or what a fighting game is about and how this compares to Marvel vs Capcom.  Pick your favourite fighters and beat each other to a pulp, in hand drawn 2d sprite awesomeness.  Did I say awesome?  By any standards, KOF ’96 is an old game – practically 15 years old!  The younger gamer may well wretch at the sight of these blocky graphics – for some, the game is older than them!!!  Now why should a KOF fan buy this game?  Why would anyone buy this game?  The fan should buy this because it’s KOF and the netcode is good, the system ever moving closer to that episode of the series, which will probably be released at Christmas.  As for the everyday player, the casual gamer, it’s pretty hard to justify a purchase.   Well, it is relatively inexpensive for a fighting game, and the quickest way to prepare yourself for KOF XIII – again, this is pretty much the KOF system in action.  Get used to it now, and you’ll be more prepared for the XIII veterans that will be trolling the Internet, hunting for fresh meat.  Don’t let them take advantage- get ready – let’s burn it up!

Let’s have a look at the package:  KOF ‘ 96 comes with the standard NGS emulation options, for screen options smoothing is of crucial importance, as the pixels on a HD TV are just a little too blocky.  Frankly SNKP should turn this on as default, as the pixellation will only scare casual gamers away.  Only one widescreen background supplied, as you can see in the images.   The music uses the original soundtrack, not arranged, which seems a shame and makes the game sound more dated, or authentic, if you would prefer.  You can set the bug emulation on so you can do Ryo’s multihits bugs and so on (!) and enable the bosses Chizuru and Goenitz.  SNKP have fixed the issues with B&B – the game now features Blood and Bounciness in Japanese and English regions.  Thank goodness for the mainstream acceptance of violence against sexy females – even if it involves bleeding…!?   There are a few new options: Quick Start will restart the previous game mode without displaying the main menu of the logo title screen.  You can always hit the select button to access your settings menu to turn this off again.  In Network Mode you can now Check Online Status, which shows all the NGS titles and how many sessions of players are active.

Let’s look more closely at how the online functions.  At time of writing the ’95 rooms have pretty much dried up while ’96 sessions are growing.  It’s 15:00 on a Friday, two days after this (ancient) game’s release, and there at 12 sessions open right now (get a job!).  Fans who want to get online need to recognise that this is probably a flavour of the moment thing, so if you want to play online, you’ll have to get the game now because in a month, it’s very likely that we’ll be playing the next episode… 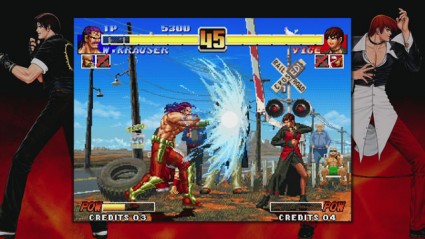 The netcode itself was a shocker.  If you remember the ‘95 review, the game played with a friend in Japan was completely unplayable.  We tried again with 96.  It was smooth!!!  There was noticeable input delay but considering the distance between us, this is a tremendous improvement and creates even higher hopes for XIII.  We will be absolutely heart broken beyond repair if the netcode isn’t like this – although it has to be said we must consider that the size of data being transferred is going to be considerably larger and more difficult to work – which leads us to that nagging feeling that if XIII netcode fails, many of us may well end up returning to our favourite old skool KOF episode on PS3.  Digression!  The KOF 96 netcode is good, even better than 95.  This doesn’t mean you will be able to play KOF like you can offline – of course not – but you will be able to have some fun. 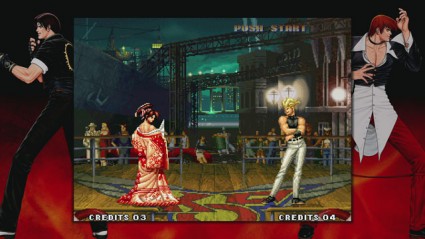 KOF ’96 is another blast of nostalgia.  While it might seem like nothing we haven’t seen before, with the usual KOF characters and violent fighting to come again, the music is certainly remarkable with tracks such as Arashi No Saxophone #2 being instantly recognisable.  While you can hear the synthetic essence of many of the samples, the memories of the 90s come flooding back.  As a year flew by from the excitement of 95, this year introduced new characters Leona, Kasumi, Vice and Mature, not to mention legends, Mr Big, Krauser and Geese!!!  It is pretty crazy stuff – fans were not able to see that boss team again until twelve years later.  While you’re thinking back, hold that thought and the graphics will look all the better, you’ll be able to notice the lavish attention to detail, and the use of real life scenery integrated into some of SNK’s best sprite work.  The story takes us through the Orochi storyline and you are guaranteed to wet your pants when you face Goenitz and you realise how much of a headache he was…  Koko desu ka?  Koko desu ka?  Koko desu ka?  OWAKARA DESU!

It’s as if we now declare the opening of the special team tournament, again, in 1996. Time travel?  Perhaps the best way to enjoy this beloved episode of KOF.  While cherished by many, out of the older titles, it is undoubtedly ’97 and ’98 that remain played to death.  Howoever, this could change…

If you want to sharpen your reflexes in preparation, or like the idea of revisiting those golden days, get 96 right now and come play with us.  Otherwise, see you in November…

Omake: Here are some matches, including Kim specialist, 777… think you could compete?  The game is simple by today’s standards, right?