While attending the Oz Hadou Nationals (OHN) in Sydney on the 28th-29th May, I was able to see Kof XIII in person for the first time ever, in Sydney’s Galaxy World Arcade on George Street. I was so excited to be able to finally play this game since it’s release and I can tell you now, I wasn’t disappointed. For anyone that hasn’t seen or played it yet, hopefully my review will help give you an idea on what you’re missing out on. 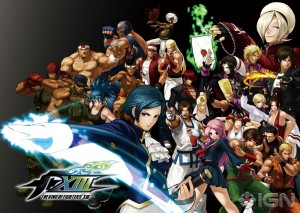 When I first saw the game, the temptation to insert a coin and get started straight away was very high, but instead I opted to view the visual intro that XIII had to offer. It’s so true that internet videos DON’T do this game justice. It’s visually stunning with a vibrant intro that just pops out colour and shows the characters we all love in HD quality.

It’s great to finally have the option to see the colour scheme you want when selecting characters and at least they are decent, not like KoF NeoWave (if any one remembers those….). It makes selecting your favorite characters to have a similar colour scheme much easier. Black and white K’ was a favorite of mine during my limited play time.

The backgrounds are SOOOOO good. The amount of depth they have visually is great and really hard to describe besides the word “QUALITY!”. The Elephant stage (sorry I don’t know their actual names..) looked so real, to me they looked like they were motion captured. Another was the England stage (I’ll call it that for now) with the buses in the background. There was so many vibrant colours and things happening, it was totally engaging, to see and feel like there are people who are actually watching the fight and not just standing in the background for the sake of it.

Character animations are fluid and pulsating. It’s so hard to look at Mai thinking “it’s bouncy!” at all when she is animated in such detail. You can just see the level of work SNKP went in to designing and implementing the moves. SDM and HSDMs (yes, I still call it that) look so good. K’’s SDM is just quality as he grabs his glasses in mid air and I nearly had an epileptic fit after Kula’s HSDM. Even the standing still animation is well done. I don’t think I remember one character that had a static animation in neutral stance. Basically, if you are familiar with XII’s presentation, then XIII is even better.

Overall, the presentation is great and a lot of detail and pride has gone into it. It’s great to see SNKP working to bring some more memorable stages and visuals to the fighting genre. 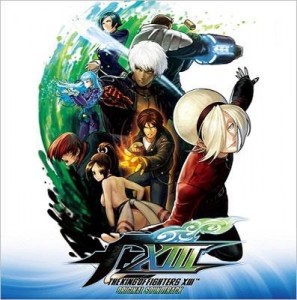 I won’t touch too much on this since the arcade unit I was playing on had sound issues with random bursts of soft and loud sounds. But when it was working the music I heard was good. I still feel the 2k2um OST is much memorable but I’ll save judgment until I hear the OST in full.

The characters sound great though. I especially like K’ and Mai’s voices. Yuri is still annoying as hell but that’s a given. Again due to sound issues, didn’t really get to hear everyone else. 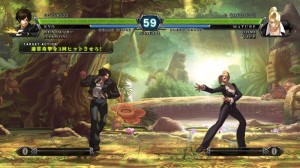 If anyone knows me, I’m all for gameplay and to me that’s what I enjoy about the game and it’s just a bonus that XIII actually looks good too.

If you are familiar with XI movement, then I’d have to say that it resembles that. Fluid and easy to move around, I didn’t have a problem executing moves or combos. The window for combos seems bigger (larger frame input) then previous KoF incarnations. It’s definitely a good thing for new comers and for doing those long BC combos. I did think it was a little too sensitive at some points where I tried to do a back shadow jump D (I find it interesting there are no shadows when doing shadow jumps) and it came out as an air qcb+D. I can do this same movement without problem on other games but this kept happening – however it’s possible it might have been the hardware at the time.

Speaking about shadow jumps (can’t really call it that now) I found it hard to distinguish a normal jump and a shadow jump since I’m used to seeing shadows in older KoFs. The speed of the jump is also an indicator but it takes longer to process it as opposed to seeing the shadows straight away, which makes assessing the situation slightly harder. The arc of the jumps is something to get used to. I know it resembles the XII jumping arc but it still feels different. I guess after enough play time you get used to it.

Coming form a 2k2/ 2k2um background I was eager to test my BC skill in what I heard is a “dumbed down” system, being HD mode in XIII. I guess “dumbed down” is dependent on who you say it to. If it were to a Kof vet, then it would be “dumbed down” but if it were to a newcomer not familiar with Kof then it would be “lenient”. My reasons?? Well first note that 2k2/2k2um (for those who are unaware) you had to manually run during BC combos (most cases), but in XIII the system does it for you. So, being a 2k2 player myself I was skeptical, but it actually is good. I ended up doing a BC combo with K’ in Training mode in a space of 10 mins and that’s from remembering stuff I’ve seen from vids. I also made some combos from cB into BC mode which was a lot harder in 2k2, which is where the problem stems. 2k2 revolves around execution and skill, where even though XIII still does, it’s not as heavy. My initial thought on XIII HD mode was right, “it’s more about remembering loops then worrying about execution” as I was doing K’ HD mode combo with ease where trying to do a similar combo in 2k2 is such a chore and requires skill to pull off. To further prove my point, T.T (TannedTitties – ON member) played the 1.0 version of XIII and hasn’t touched it until a day after I left Sydney (30th May) and was still able to do Iori’s HD 90% combo.

I haven’t really spoken to actual vet players but going from what I’ve read on the Internet and experienced for myself, I feel that the system just doesn’t feel like KoF if it’s not hard, and KoF has always been about execution. The time frame to learn a combo is quite small compared to 2k2, which I guess is what SNKP wanted?

On the flip side, HD mode with auto run has some benefits. As mentioned above, doing sB into BC combos was SOOOO much easier and it really makes a cB combo that much more deadly in this game. Being that the damage (depending on your character) is much greater in this game, you really don’t want to get snuffed out from a cB 60% HD combo. Of course your opponent has to have meter, but meter building in this game is not a problem. Not long after my fight started, my K’ has 2 stocks at the ready and I didn’t even realise.

Another good thing about XIII is that it caters for the characters that didn’t really have much in the wake of BC combos in 2k2, so characters like Goro and Chin all excel in this system. There is a lot more freedom in linking moves this time round, and it’s really up to your imagination on what you can do. Not too sure about Clark or Ralf though…

BC in the air is evident but wasn’t really able to exploit it. When I remembered you can do that, I ran out of time. I believe there is hidden potential in BC in the air as I haven’t seen anyone use it. Not sure if that means it is useless or no one has bothered to figure something out from it. Definitely something I want to touch on when I get the game.

It was great to have all the old mechanics back into the game (guard roll, CD blowout, C/D throws) as XII kinda went off on a different tangent.

Two things that I REALLY need to adjust to is the running and CU’s (crossup) in this game. Mannnn I thought Kasumi jD was good, kyo’s jDown+C is on another level and it is so ambiguous! So much so that even I was getting confused on which side I was going to be on and it started to get annoying. As much as I like to CU in KoF, Kyo’s is just way too good and ups his mixup game exponentially. K’ jD seemed ok but out of my time playing the game Kyo’s was by far the best. With the running, there seems to be a bit of “slow down” animation if you want to stop, which makes sense in modern world but in turn makes it hard to get in close and block an incoming attack because you have to factor those frames. A few times I ran towards an opponent expecting a cB, so I held back but still got hit. I really had to change my style and try and stop a few pixels further out. In the end, not big issues but something that stood out for me.

The inclusion of EX moves has further added depth to the gameplay then ever before. Again, those not familiar with KoF EX moves, it basically changes the properties of a move to be either quicker, more hits, invincible, more range and so on. I guess this is where “easy meter building” comes into play as to do an EX move cost 1 stock and can be used into combo or stand alone. I didn’t really utilise this feature because I kept forgetting there were EX moves, but I found myself using it a lot with K’ to link some of his stuff. I can see in high level play where this could make or break a tight match as there are interesting ways to use this feature. Some have commented on saying that EX moves are more important the BC combos? I guess it depends on situation and playstyle, but your more seasoned players would opt for EX moves.

Overall, very satisfied with the game as it is really enjoyable. I personally like the execution difficulty of 2k2 but that’s just me. In saying that, XIII will help new players ease into the system and gives players lots of variety in how to play. The roster is plentiful, with characters we love so there should be no excuse for not liking this game. Can’t wait for the release of this to drop later this year.