Yes, I saw them, and they weren’t sporting a comical afro, shooting uzis or making schoolgirls scream like they were about to explode. 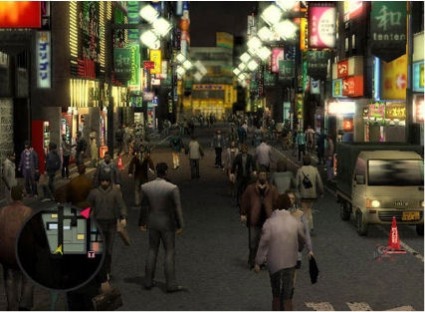 Honestly, they ARE there

In Yakuza 3, you can see black men walking through the streets of Tokyo, as normal everyday civilians. I was shocked.? Not just one black man, but one in casuals and another in a suit.? What does this mean? Has Japan accepted black people as a normal, rather than spectacular (or strange) gaijin? Son of a white dog! Perhaps even, the black man has become accepted where the white man, and the indian/asian, has not?*

Let’s look at the role of the foreigner in Japanese video games.? While not exactly reflective of society as a whole, it is certainly reflective of a section, if only that of the marketing forces that direct game content in order to make (or save) sales.? If we consider the influence of games, then what does this say about their audience?

It is the games set in Japan that say the most.? In the Shin Megami Tensei: Devil Summoner series, they don’t try to differentiate appearances by giving characters unnatural hair colours, everyone has black hair, with the odd dyed brown and feathered haircut, just to make 1920’s Japan a bit more trendy.? There is only one character that is blonde, this oh so mysterious gaijin.? Slim, manicured, pin sharp threads, yet not homosexual, or even sexual, he’s just… cold.? This character challenges the hero about his beliefs and seems to have some ulterior agenda… And so it turns out that this foreigner just happens to be the embodiment of evil himself, Lucifer.? Now what exactly does that say about attitudes to foreigners?

Many jump to accuse the Japanese of racism.? On the other hand it could be said that they are merely xenophobic, having great pride in their isolated nation; scared of what the foreigner’s influence could do to it.? Japan is a place of great culture, and while attitudes regarding modern living may have changed, it doesn’t seem like customs have.? Taking the United Kingdom as an example, notably London, where the melting pot brims over with international cultures, what can be said of English custom?? Has anybody seen it? recently?

The shops used to be closed on Sundays; people went to church in the morning and enjoyed a roast dinner with the family.? Has the UK benefited from sucking up all these cultures?? Arguably, yes, but at what cost to its own?? Does anyone care?? Japan’s culture and customs are part of its charm.? Where people respect each other, are quiet on public transport and women take pride in being matriarch of the home, you can easily see why so many men, unhappy with their western, ‘over complicated’ lives yearn to be a part of it.

But they can’t, and at this rate, they never will.? Shenmue was an amazing game, I don’t recall (as of this moment) seeing any Gaijin there, but Shenmue 2 took Ryo to Hong Kong, and… all of Japan with him.? My love for the game died there.? I enjoyed Shenmue because it reminded me of being in Japan.? People were polite, you went to sleep at a respectable time, oh and the big bad guy was a foreigner.? When Ryo arrived in Hong Kong, everyone acted like they were Japanese.? They spoke courteously, bowed, and well, spoke Japanese.? What a strange country.? I ran back to Japan, in other words, Yakuza.

When Sega stopped making hardware, we all mourned the loss of the Shenmue series.? However, the engine was recycled for the Yakuza series.? With Yakuza 3 now on PS3, I returned to Tokyo in all its HD glory.? Just getting over seeing black people in the street, somehow convinced it had something to do with the Softbank commercials**, I was followed down a dark alleyway by a group of gaijins in black suits, sporting shades, big cleft chins and sticky out ears.? I had this feeling they weren’t interesting in knowning the best places to pick up girls, at least, not with me, Kazuma Kiryu, still in the picture.? Perhaps, some things don’t change.

Perhaps it’s all coincidental?? How else would a game plot develop without an outsider or two trying to destroy everything Japanese?? Lucifer doesn’t just want Japan, he wants the whole world.? The mafia have the same plan.? It’s not really racism then, is it?? Gaijins might look a bit funny, but then again, how are Japanese portrayed in the west?? A chipmunk-toothed salesman who is clinically depressed, henpecked at home and casually gropes women on the tube?? It goes both ways, doesn’t it?

With the inclusion of foreign faces in Yakuza 3 as merely background, I’d say Japan is opening up, ever so slightly.? Before long, we’ll ruin it all, giving women equal rights in the workplace while encouraging men to stay single and other nonsense like that, leading to more messed up kids who run around at night with guns because they can’t tell the difference between video game fantasy and reality. 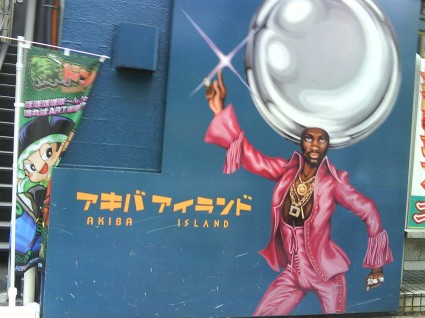 * The last time I saw an Indian asian on TV, he was advertising curry.? The other time, he was a refugee living in a closet.? Ever seen Zetsubou Sensei?? Ghost in the Shell?? How do they portray foreigners?

** The Softbank commercials featured a black man as part of a Japanese family, the father being a white dog.? Apart from being rejected for marriage by a Japanese girl, I didn’t see any racist or stereotypical messages in the ads about black people.

The ON misc videos thread (for Softbank ads)

Softbank’s Dante and the White Dog

Regarding the ads, oh yeah, Tarantino did a stint near xmas.

Mum: Are you definitely going to Tosa?

Mum: What about Uncle?

Uncle Tarantino: I am Tara-chan!? *does Samurai impression*

Daughter: It’s the phone. (picks up) It’s your wife.

Mrs Tara: Is Tara there?

Note: Tarantino refers to himself as Tara-chan, which is an obvious gaijin mistake to make, as Japanese speakers only use the suffix (-chan/-kun/-san) when referring to somebody else.? I highly doubt Tarantino doesn’t know this, which, in my humble opinion, means the director is poking fun at foreigners.? It’s not exactly harsh though, as most beginners make this mistake…