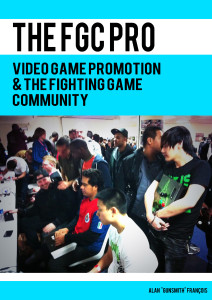 [ Back to Contents Page ]

Do you like a game that not enough people play?

Do you want more people to play with?

Do you want more people to like the game that you play?

This game needs promotion.  This is not a guide on how to spend thousands on advertising in the press and other media, but more on utilising local and live events.

This guide is aimed at the tournament planner but much of the marketing and financial side applies to other live events.  There are many ways to promote a game; here are four types that utilise working with the public at large:

From these come the material to use for actual marketing, unless you just want use an in-game screenshot alongside a pair of breasts or two angry men staring at each other. Then you don’t even need the screenshot. Otherwise, photos and footage of crowds and individuals enjoying the game are the essence of what every promoter wants: hype.

Beta tests or location tests, or ‘loke tests’ can create interest in a game, especially if it’s limited to a small number of privileged people. These people can be hand picked or chosen by lottery, the aim is for these players to tell others about said privilege and create interest or even jealousy, although that can backfire if aforementioned parties hold grudges. Many companies such as SNK Playmore, Capcom and Arc Sys hold such tests with every release of their fighting games, even giving out gifts to those waiting in line. To get on this hype train, an event organiser needs a good contact from within the game company to get hold of the beta, and then a venue and equipment (see below).

This is what often happens at trade shows and expositions.  Armed with a celebrity or at least an articulate person on the microphone, two high level players (or at least players who know what they are doing), show off the game for 5 minutes or so in front of an audience.  Setting up the event is easy, you just need to book the space at the venue.  Getting the audience is the hard part.  Getting KOF XIII on stream on the Gamespot stage at the anime Expo to an audience of hundreds (and thousands online) is a good measuring stick.  Game media may be interested in exclusives and live interviews so make sure you get in touch (check out directories in section 5).  It’s even better when  edited, eradicating live problems with bugs, slips and poor player performance.  Buzz can be created by setting up live question & answer sessions but these are often over run by trolls / spam.

Some game stores are interested in creating footfall with exclusive sessions where people who visit the store can try a game before it’s released.  You don’t want to give someone 5 minutes to test a game that is incredibly complex, it should be easy to grasp and fun to play.  You also don’t want people to get killed off by an already advanced player, try to separate these players from the main crowd – if they don’t have fun at the first try they may never come back.  If you are marketing this to a community, make sure they seem interested, it’s horrible to spend time, money and effort on an event that nobody turns up to, just because they only turn up to win money.  This is a sad fact of life, not everyone is hype for getting out of bed on a Sunday to travel for a hour to play a game.  There still needs to be giveaways and prizes – something to win.  People are lazy, but people are also competitive.

Tournaments – regardless of level – are the most common and on a personal level, the most rewarding way to promote a fighting game.  It can facilitate the direct participation of a huge number of people and garner thousands of viewers.  Players fight their way to victory and gather excitement leading to the grand final. A casual tournament is fun, but anyone can recognise a high level match and appreciate the skill, raising the tension and excitement that makes for prime time viewing.  Planning, organising and running the event can be physically, mentally and financially draining, however. A good tournament can cause an explosion in sales, a bad one can cause players to turn their backs on the game, telling others not to bother.

My first tournament was a major around 1993.  I say major because it had regional radio behind it and a huge number of competitors.  It was the KISS 100 FM Street Fighter Tournament at Funland Trocadero.

I’m not sure there was an entry fee but I think it was something like £5 to enter.  What I do remember is a whole load of people crowding out the ground floor, where the machines had been brought down just for the occasion (Funland occupied three floors). Lots of hype music and commentary, with people around machines, shouting and screaming.  It became quite the blur.

I played my single match, lost, and with all my hopes and dreams crushed, went home.  It was a pretty horrible experience. I felt no urge to continue in either game or tournament.

In comparison, at Paris Full Contact in May 2013, there were 30 Xbox consoles set up on tables in a nightclub (this was during the day).  There were so many setups that there were often machines sitting around idle, which is normally unheard of.  There was a kitchen & bar set up to sell food & drink, toilets and a smoking area outside.  Whereas after losing at my first tournament I was inspired to do nothing but go home, here at PFC, I could play more casuals, learn more tactics, talk and discuss, and study people playing.

It was brilliant, and even though I still lost, the experience made me want to play the game more, and tell other people to play it – as there was a scene for it.  Not just a competitive scene, but an arena where you could play the game just for fun, just for the hell of it!

The aim is to make the tournament an exciting and hype event that leaves a smile on everyone’s face.  Well, nearly everyone…