Summary: What happens when you pay to put your character in the game… She is without doubt top tier, the only thing stopping her being a complete boss is having an invincible anti air and an overhead.

Best Tools: her button charged ROTU aka “Drop Kick” adds huge damage to her combos, so if you’re used to Raiden, you will find these combos easier! 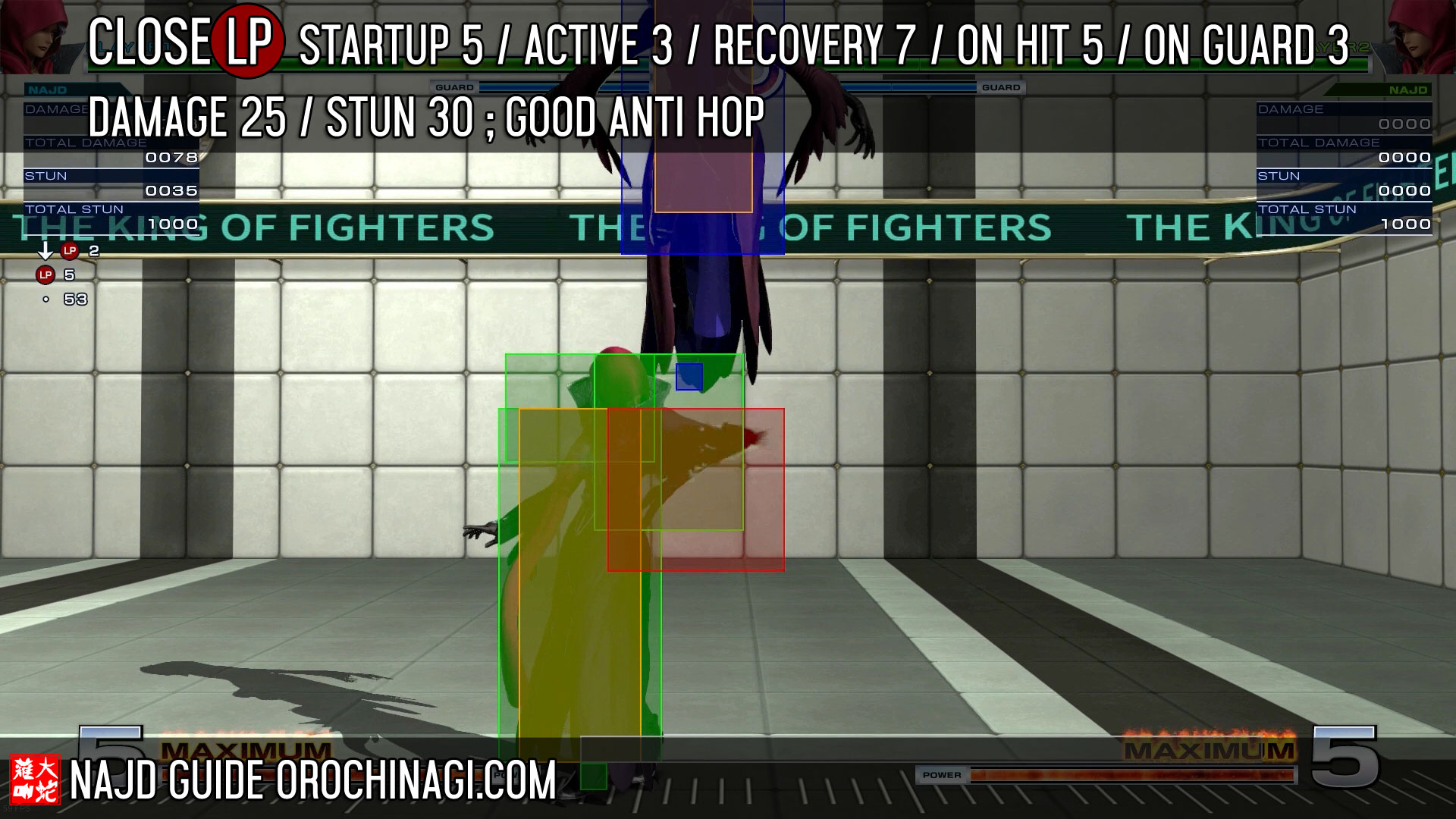 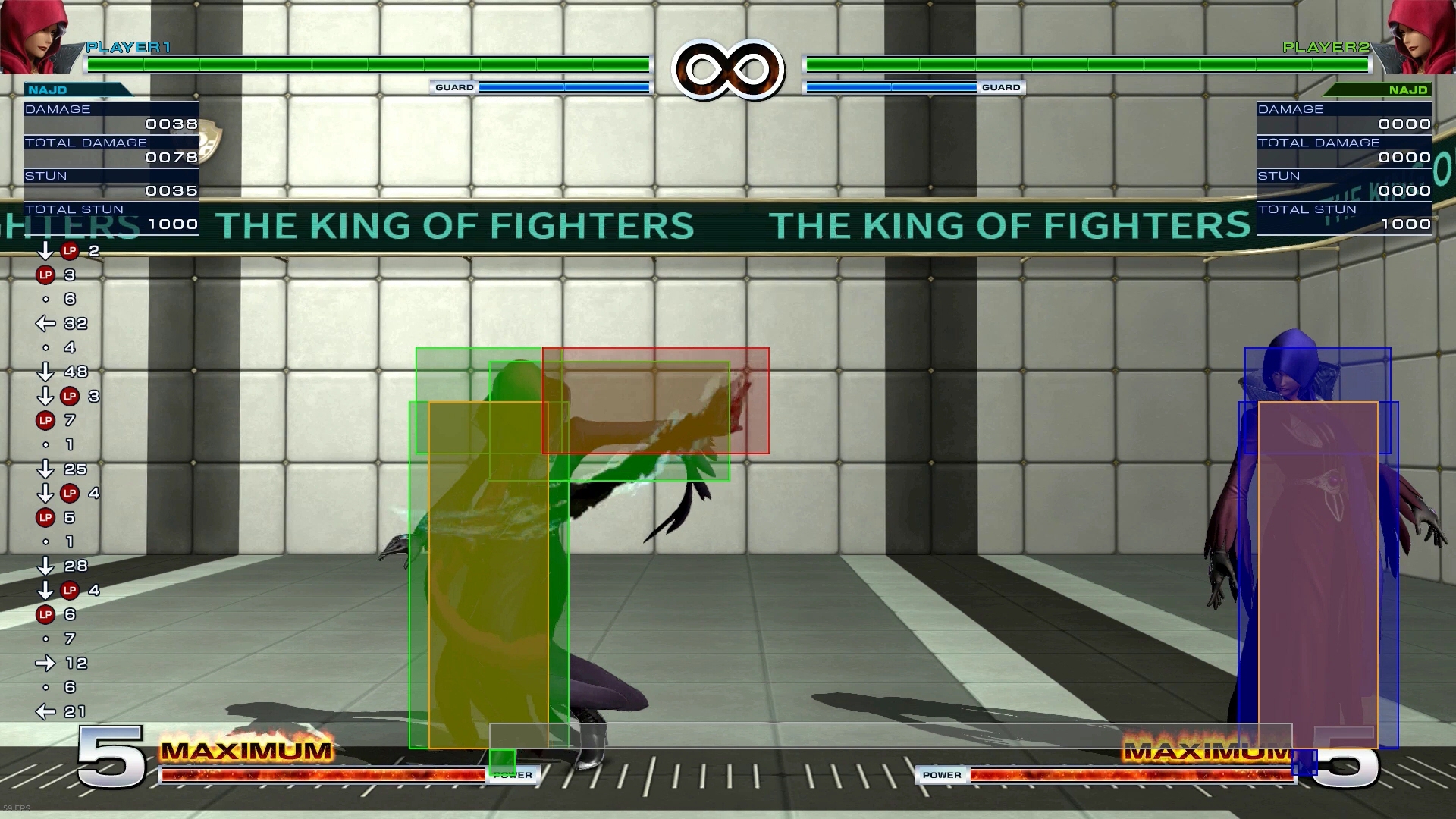 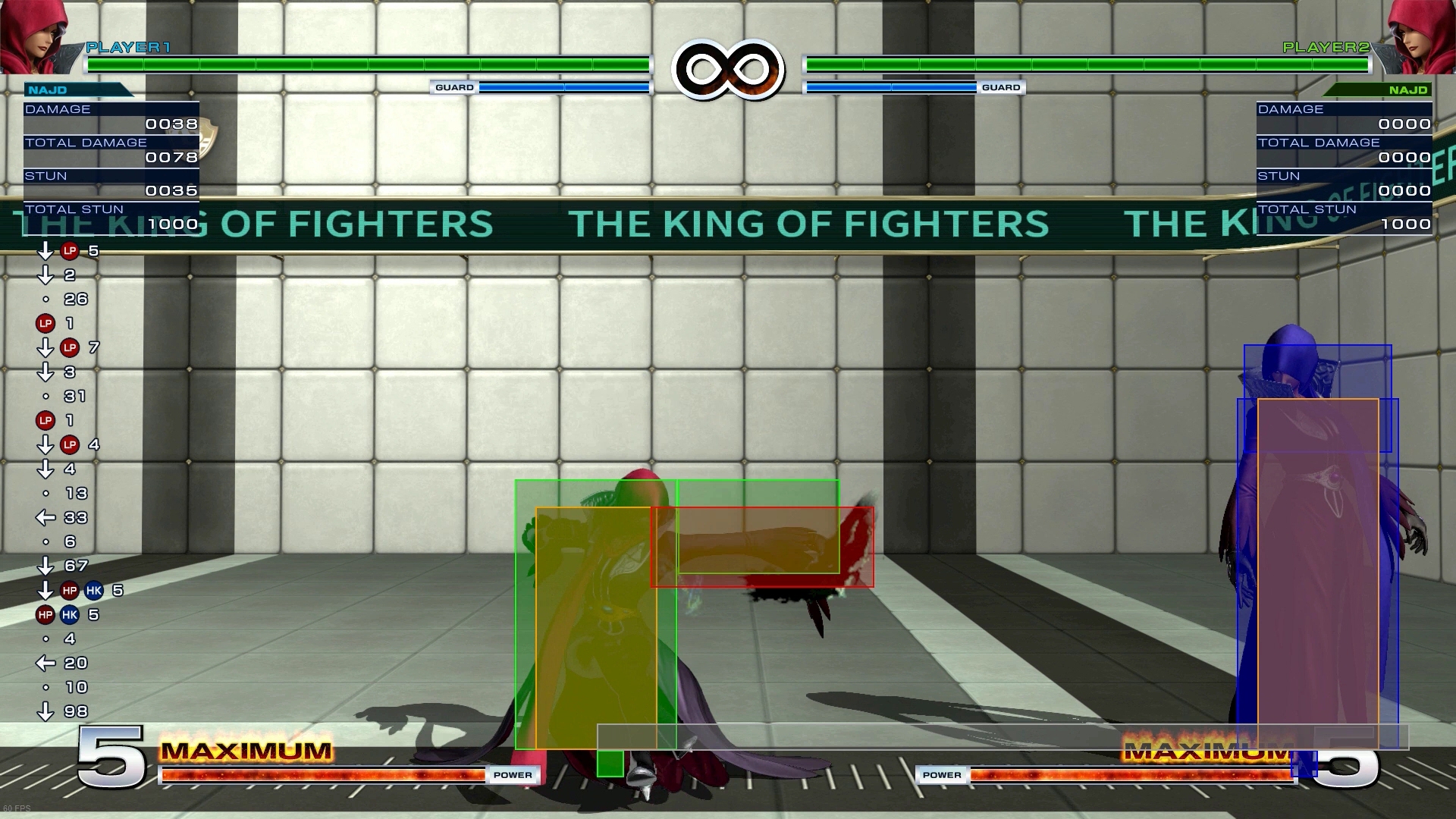 Crouching LP – 4f 8f  – Look at this range! A great fast move for interrupting and stopping hoppers before they leave the ground. Can whiff cancel.  You can mash and confirm after 2/3 hits into BOP. Chains into standing LP, then to stand LK! 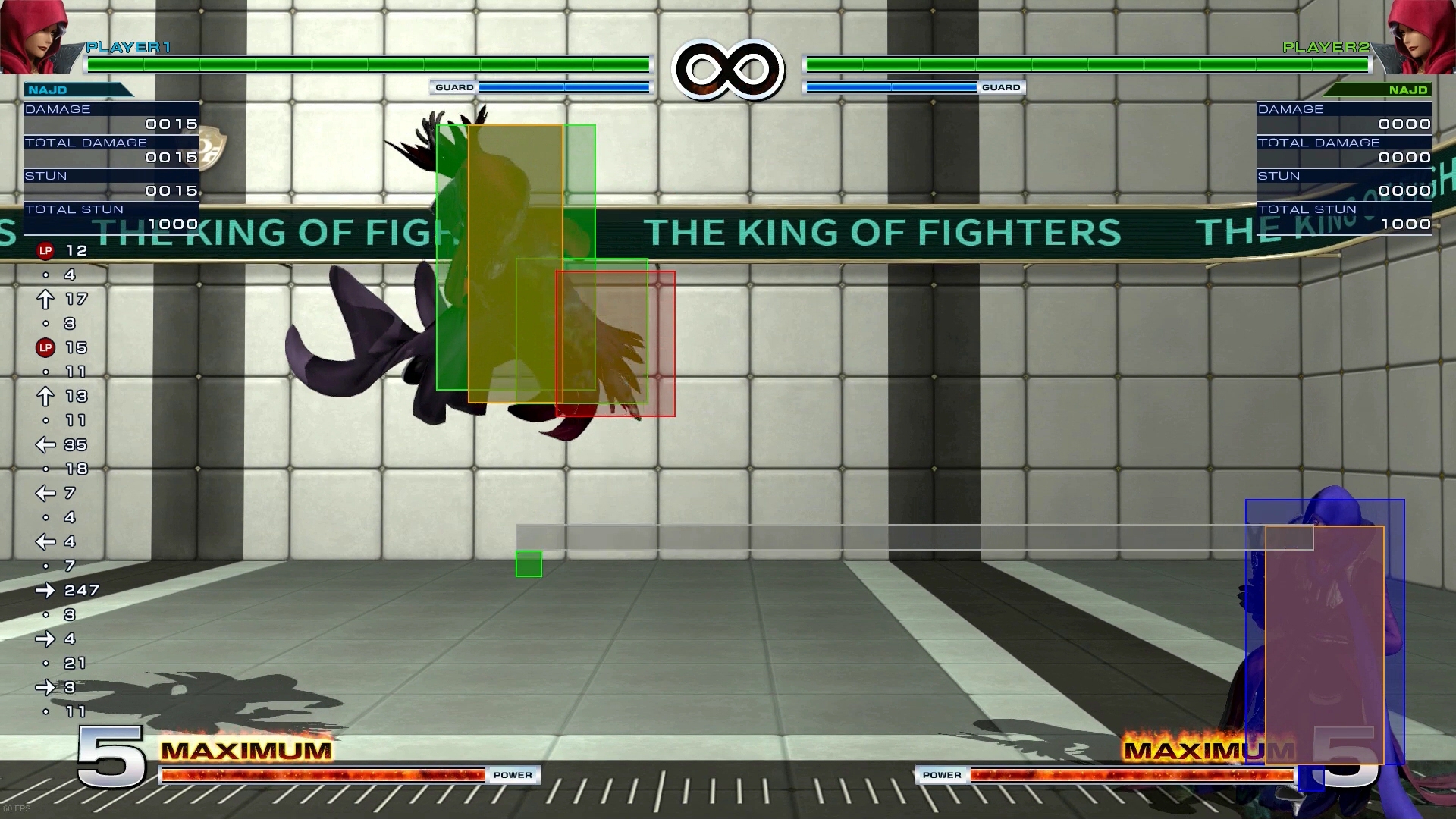 Jump LP – 5f +1 on landing. Not the greatest range, but it does remain active for 8f. Note that short hop LP is 6F.  Because of the deep angle, easy hop in to force block 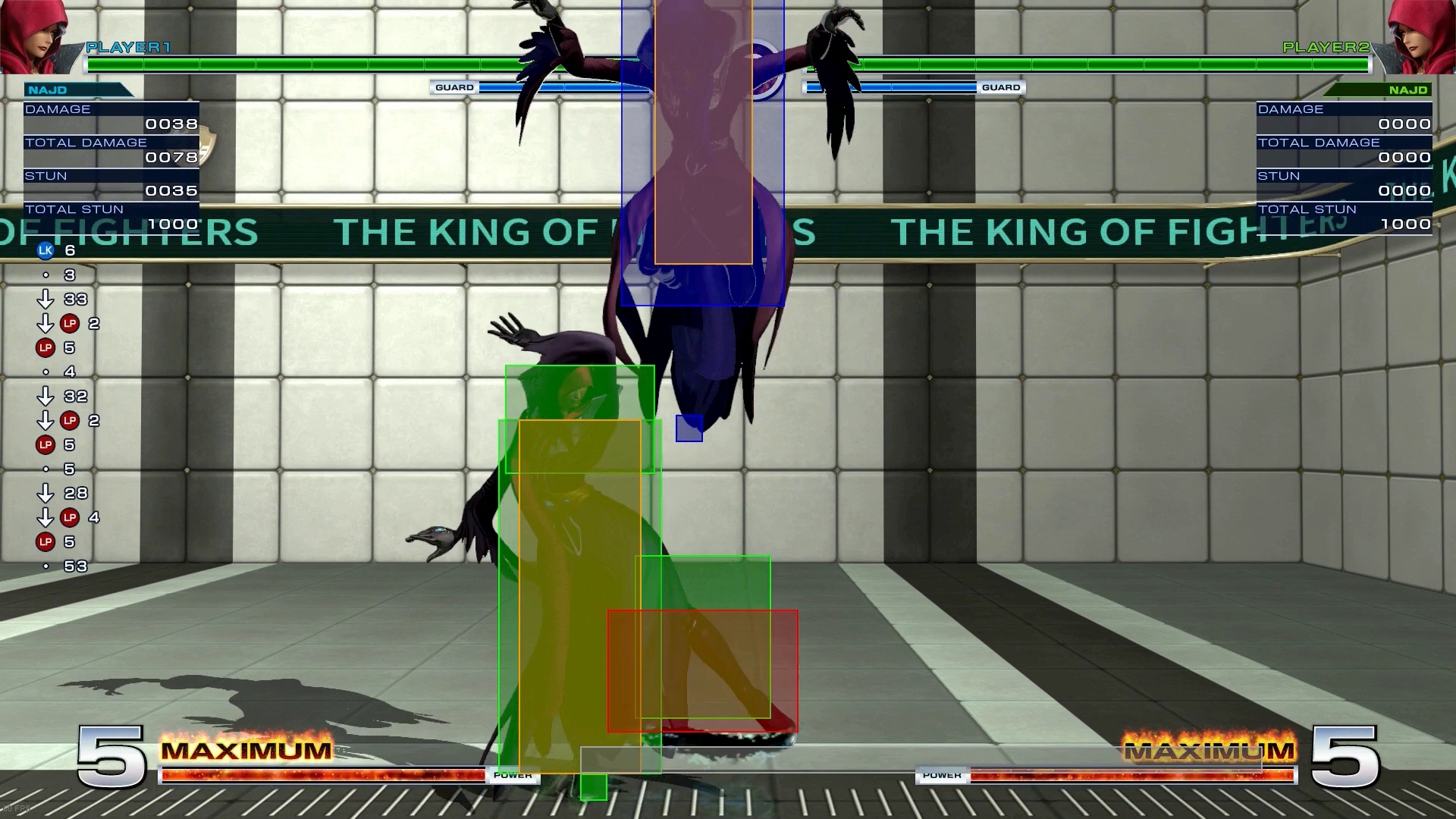 Standing b doesn’t chain but it does combo 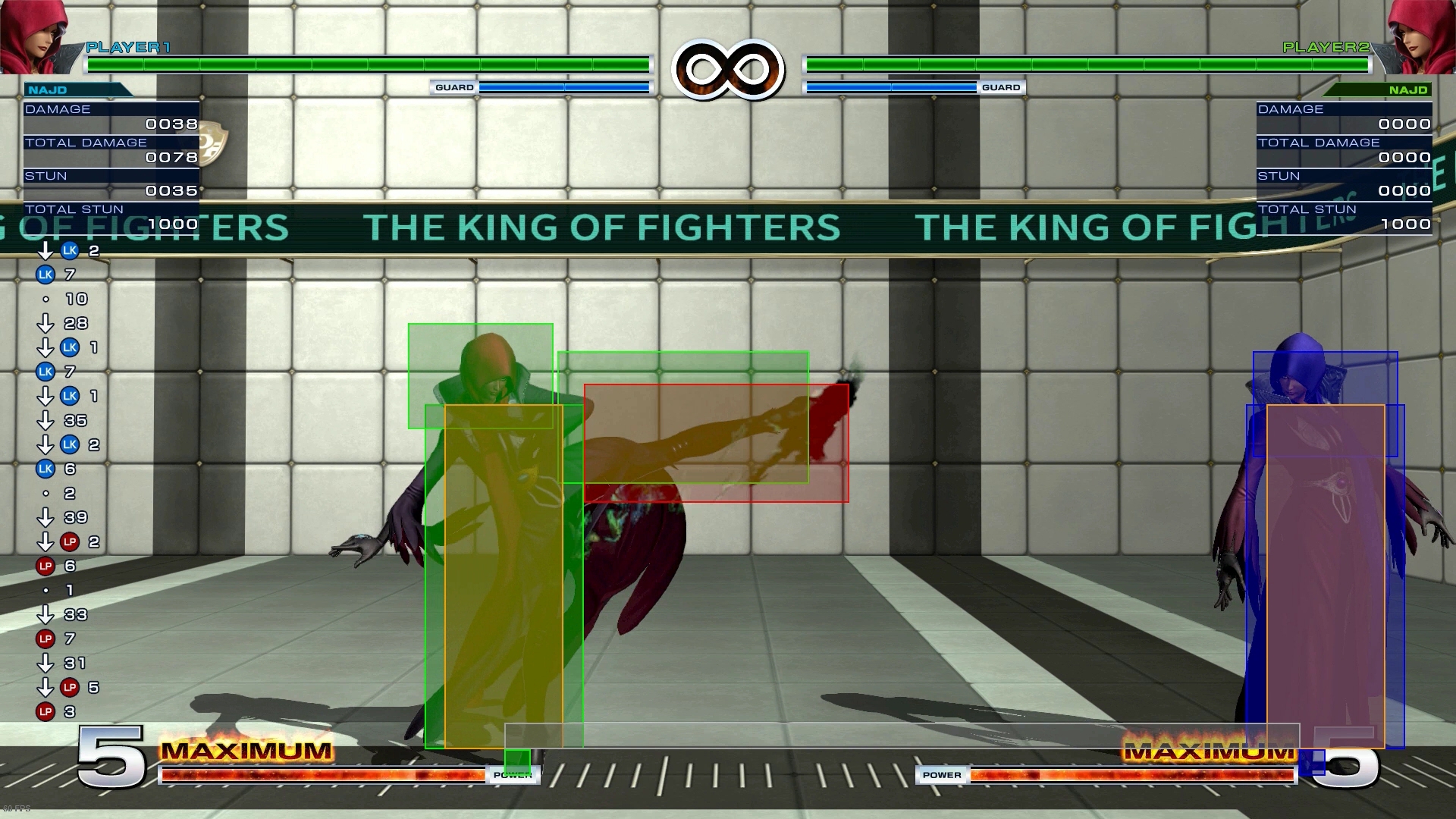 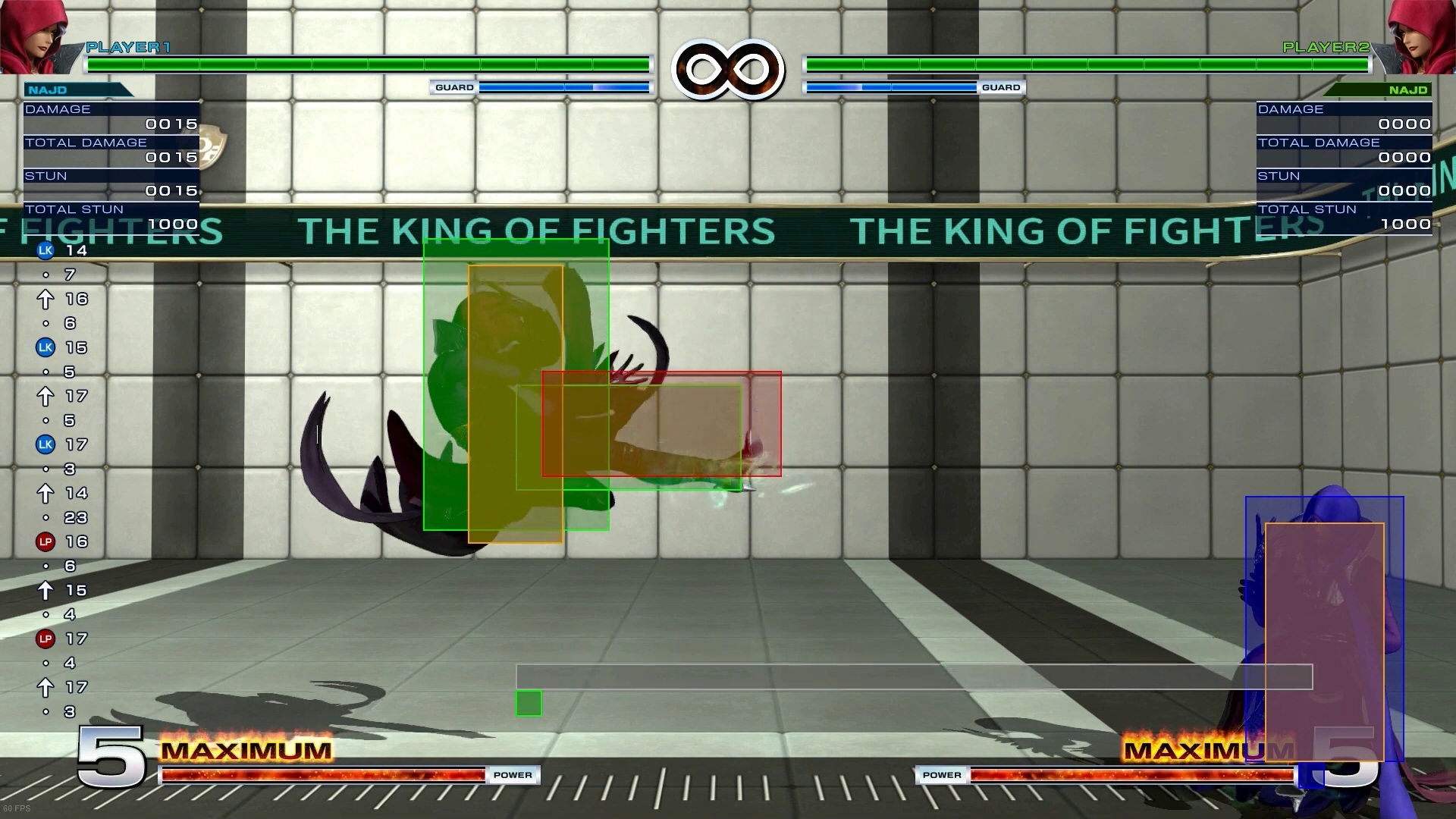 Good range and can crossup 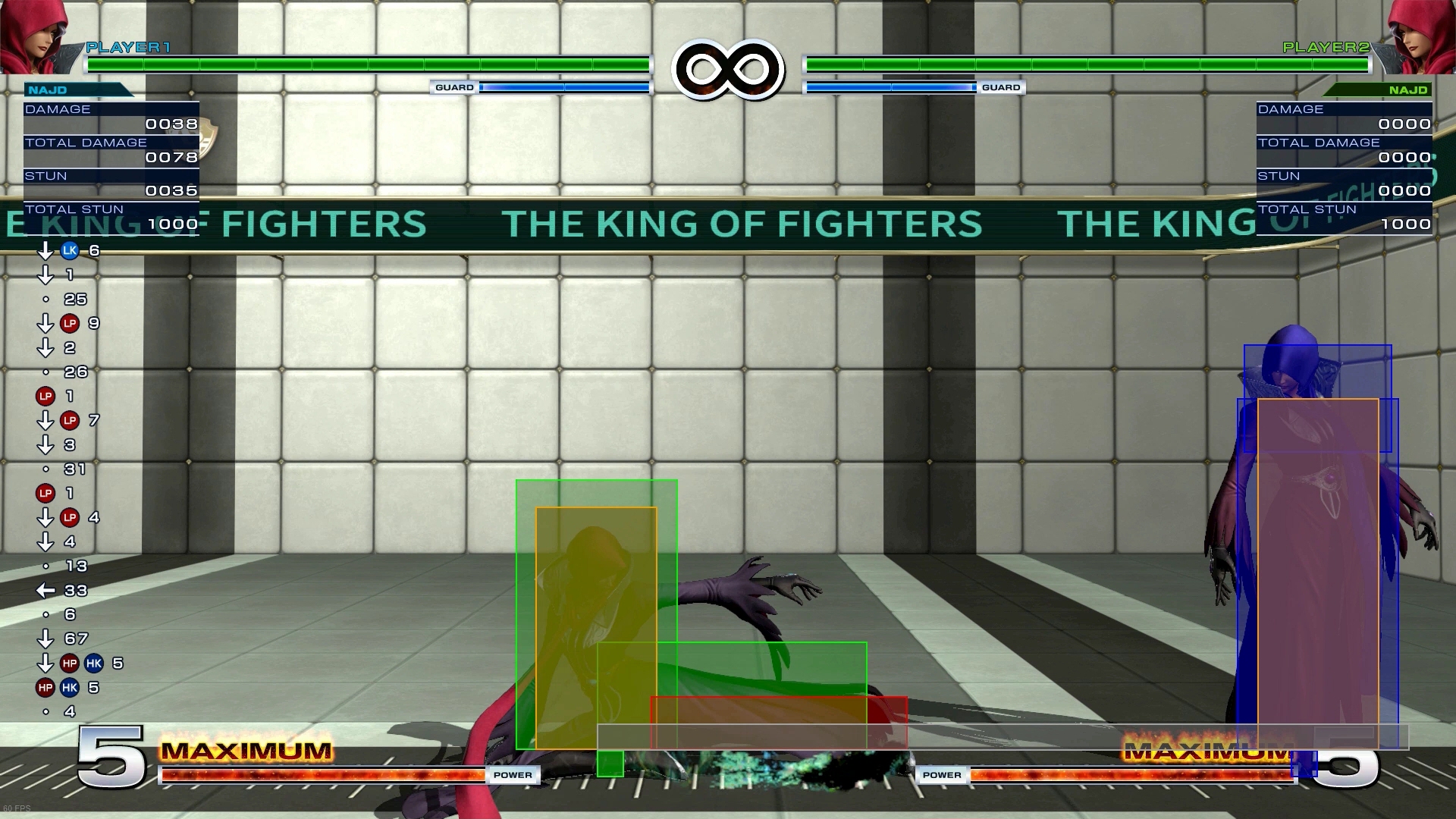 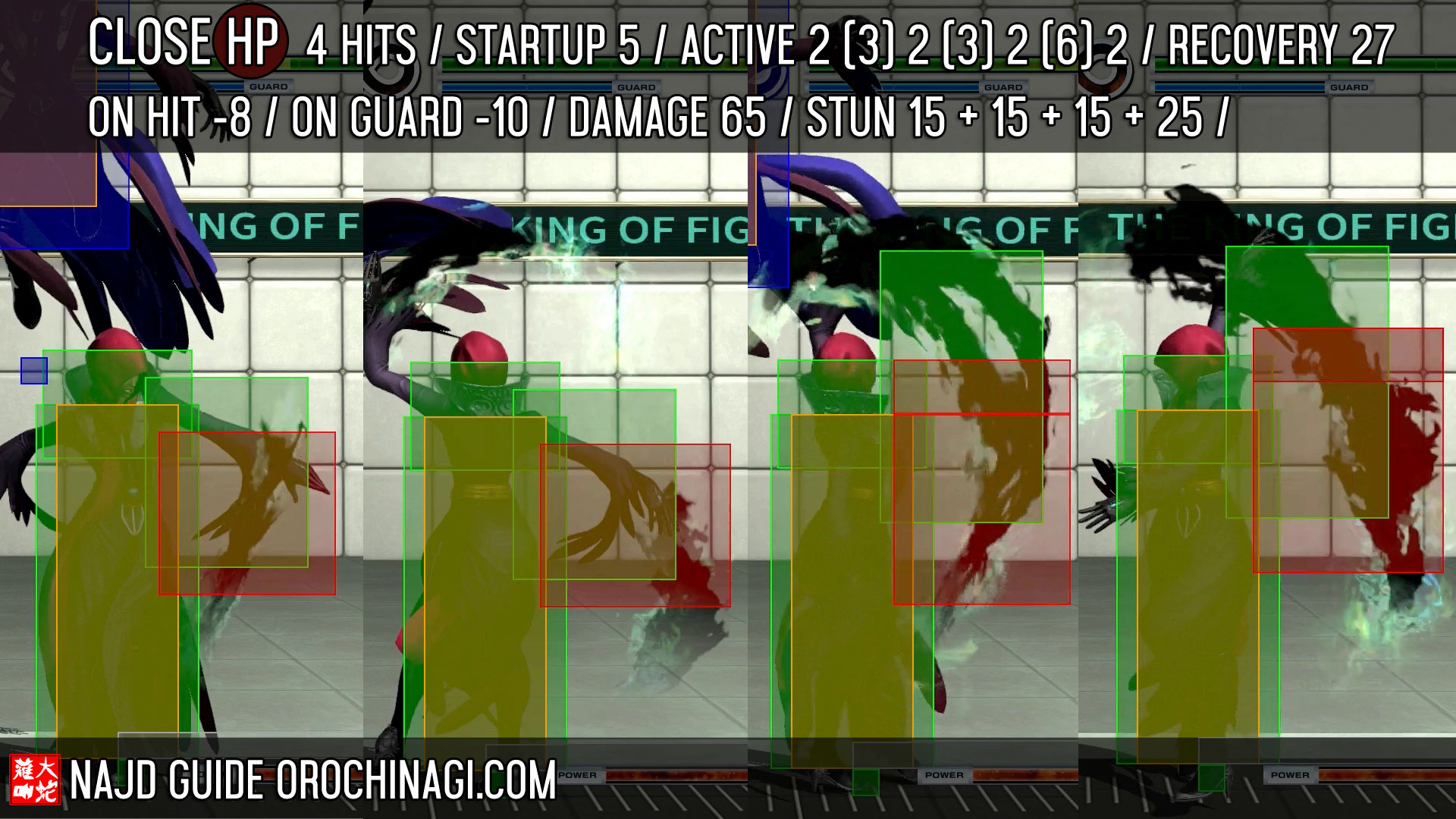 Fast, causes juggle, chains into fwd LP, giving you lots of time to prepare a combo 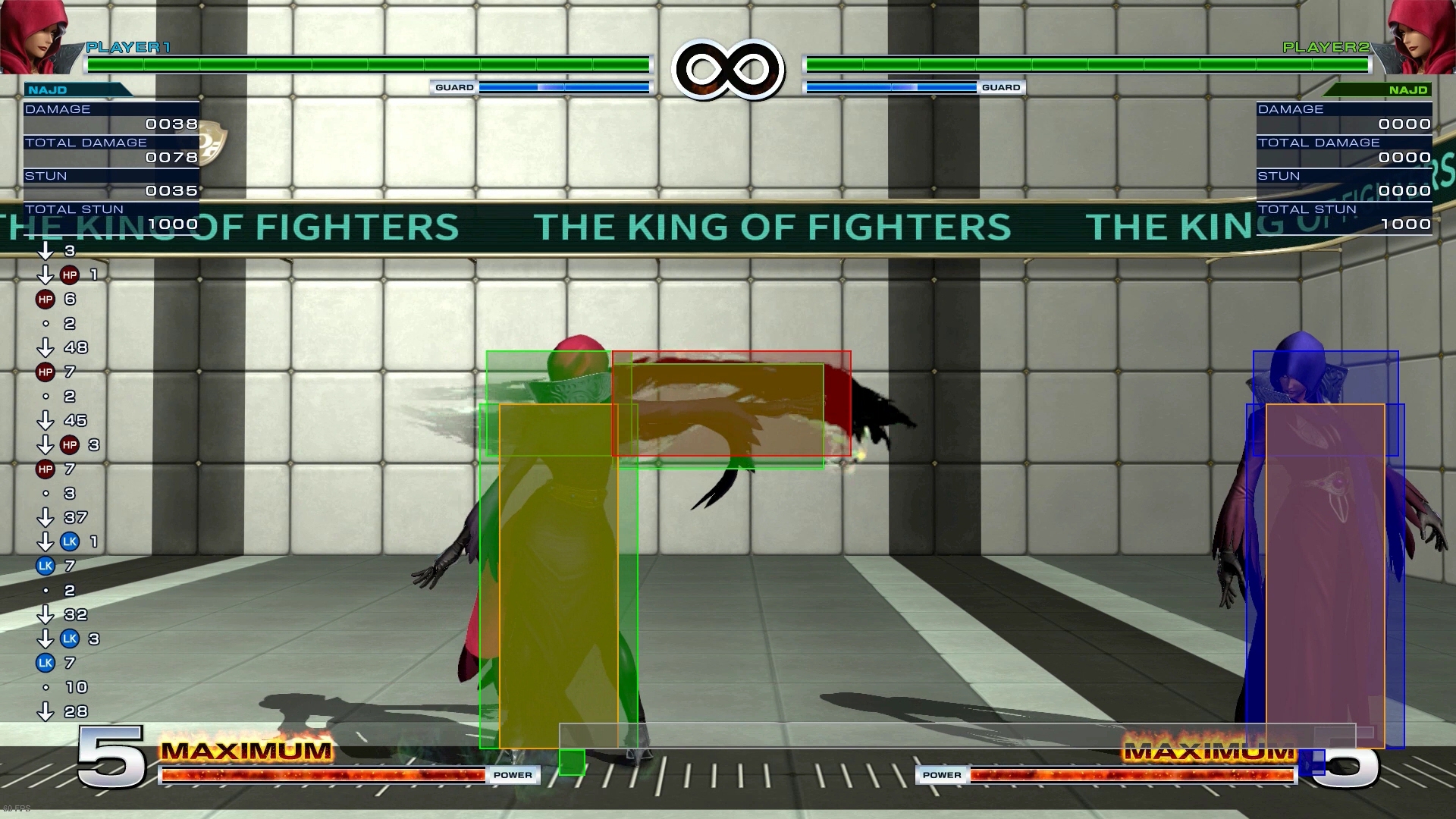 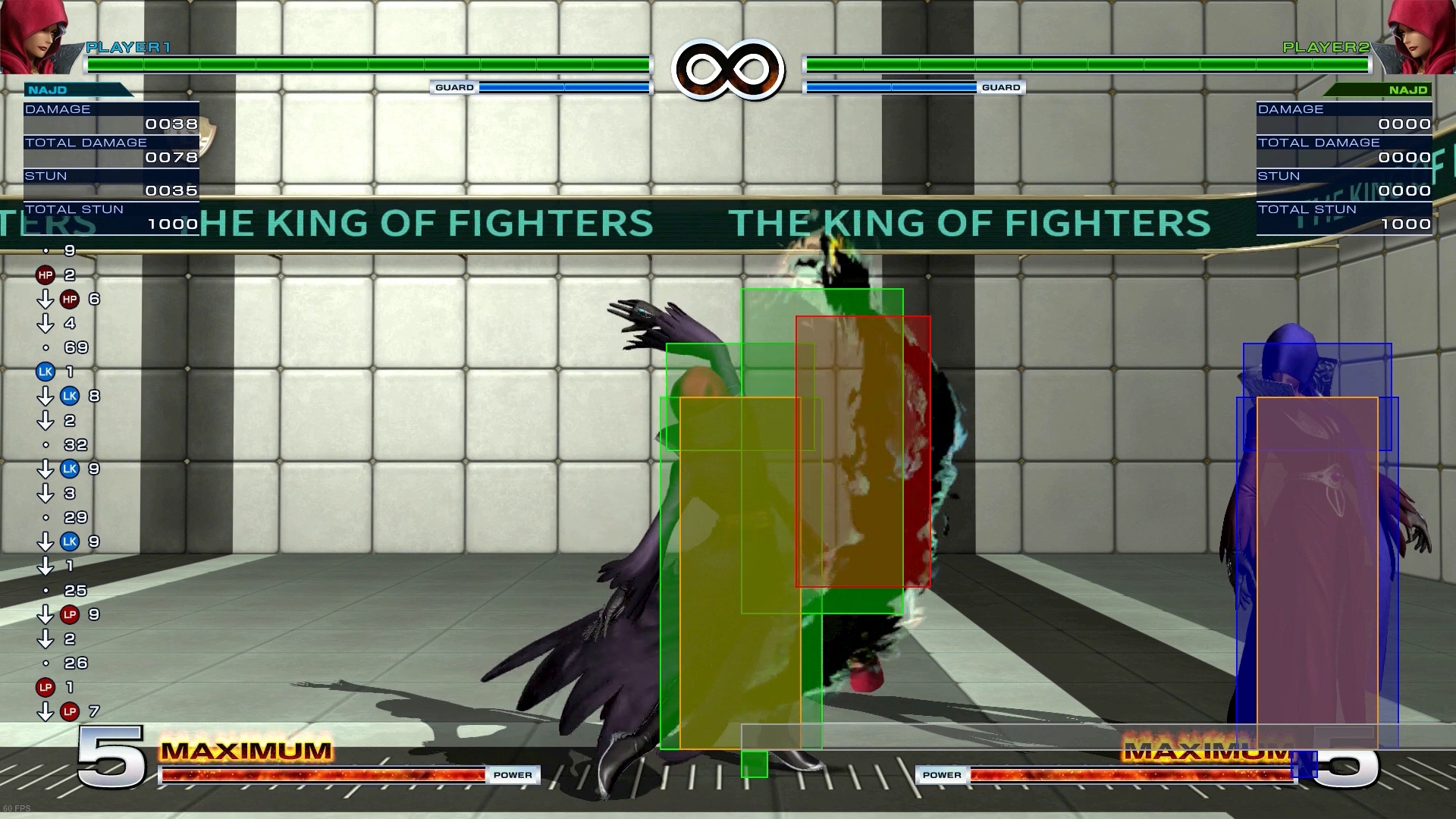 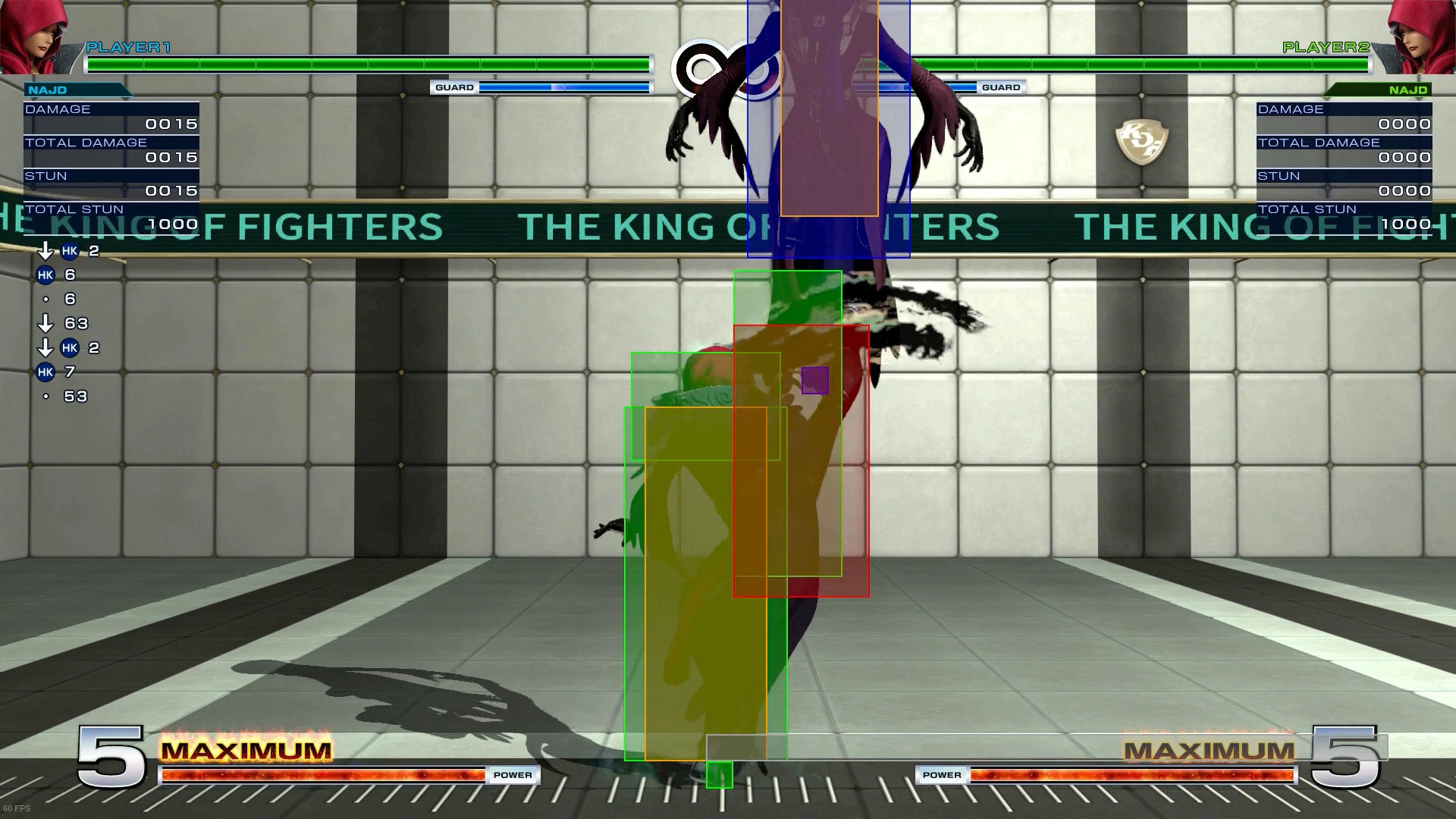 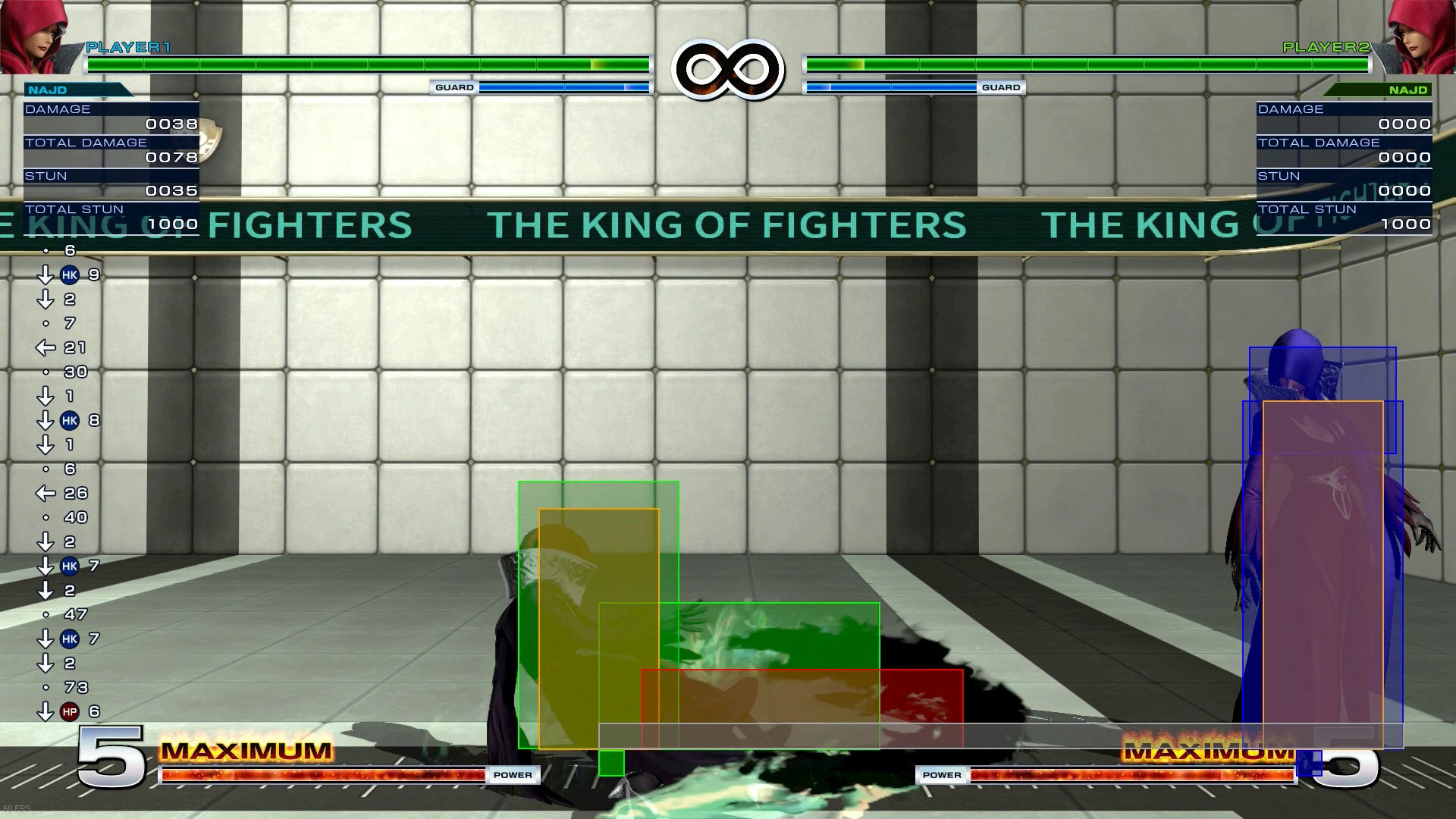 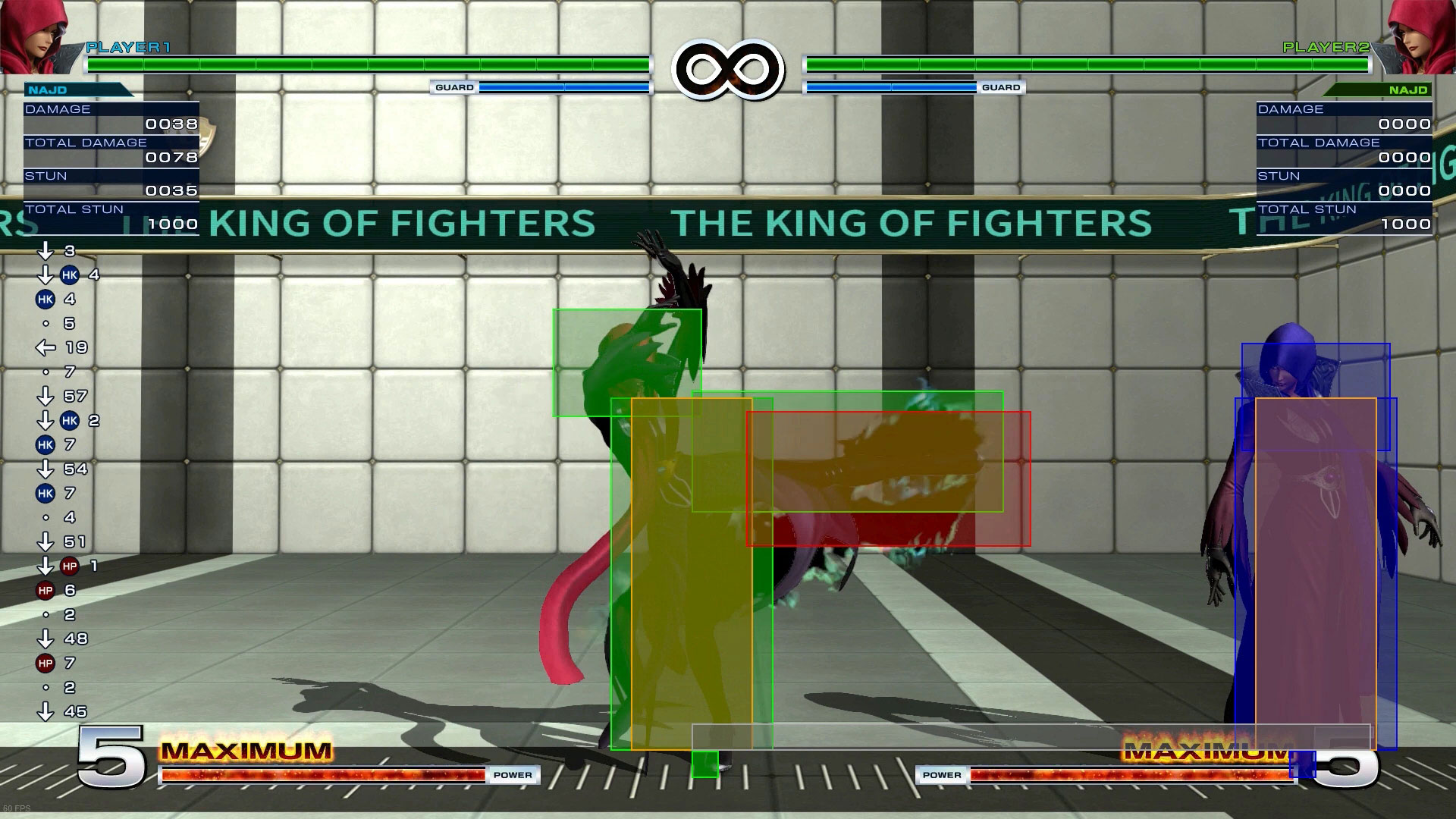 Najd’s far HK. Look familiar? If you know how to play Iori, Beni, Yamazaki, Mui Mui, then there will be no surprise… otherwise check strat section 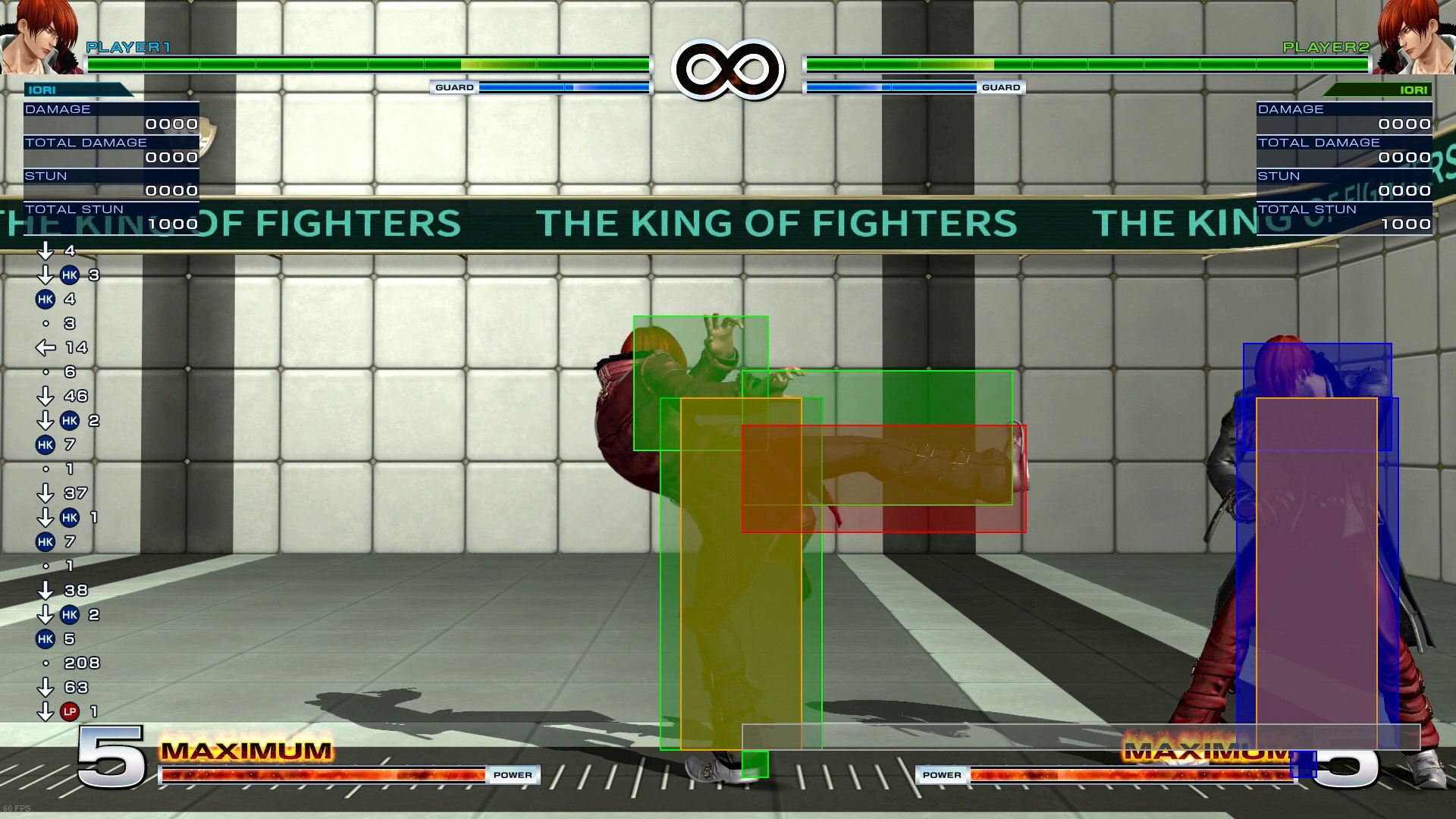 Here’s Iori’s far HK for comparison. It is faster by 2f 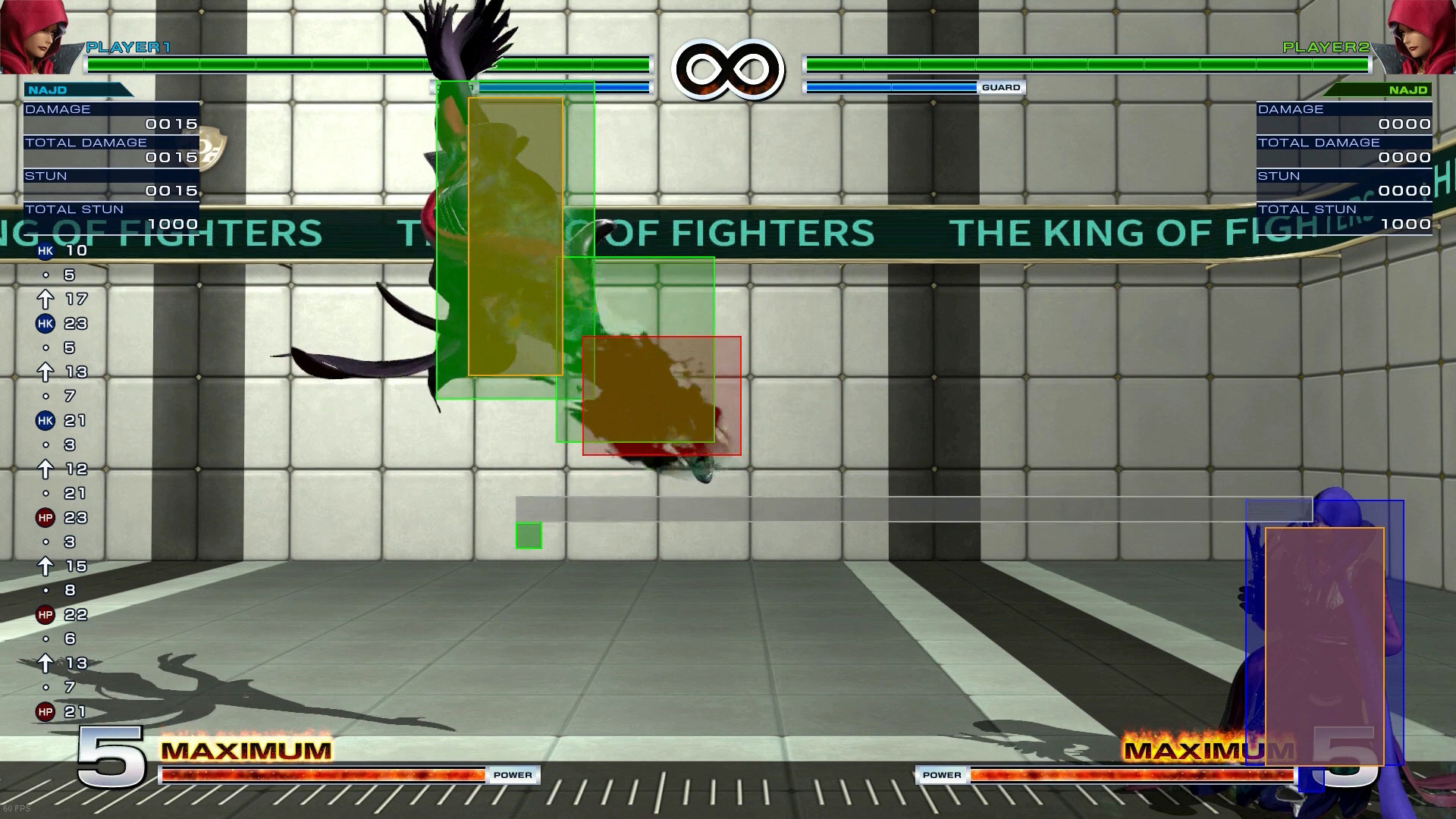 Hop in early with this at range, not much they can do; you can also hop backward with this and guard break the still crouching opponent. 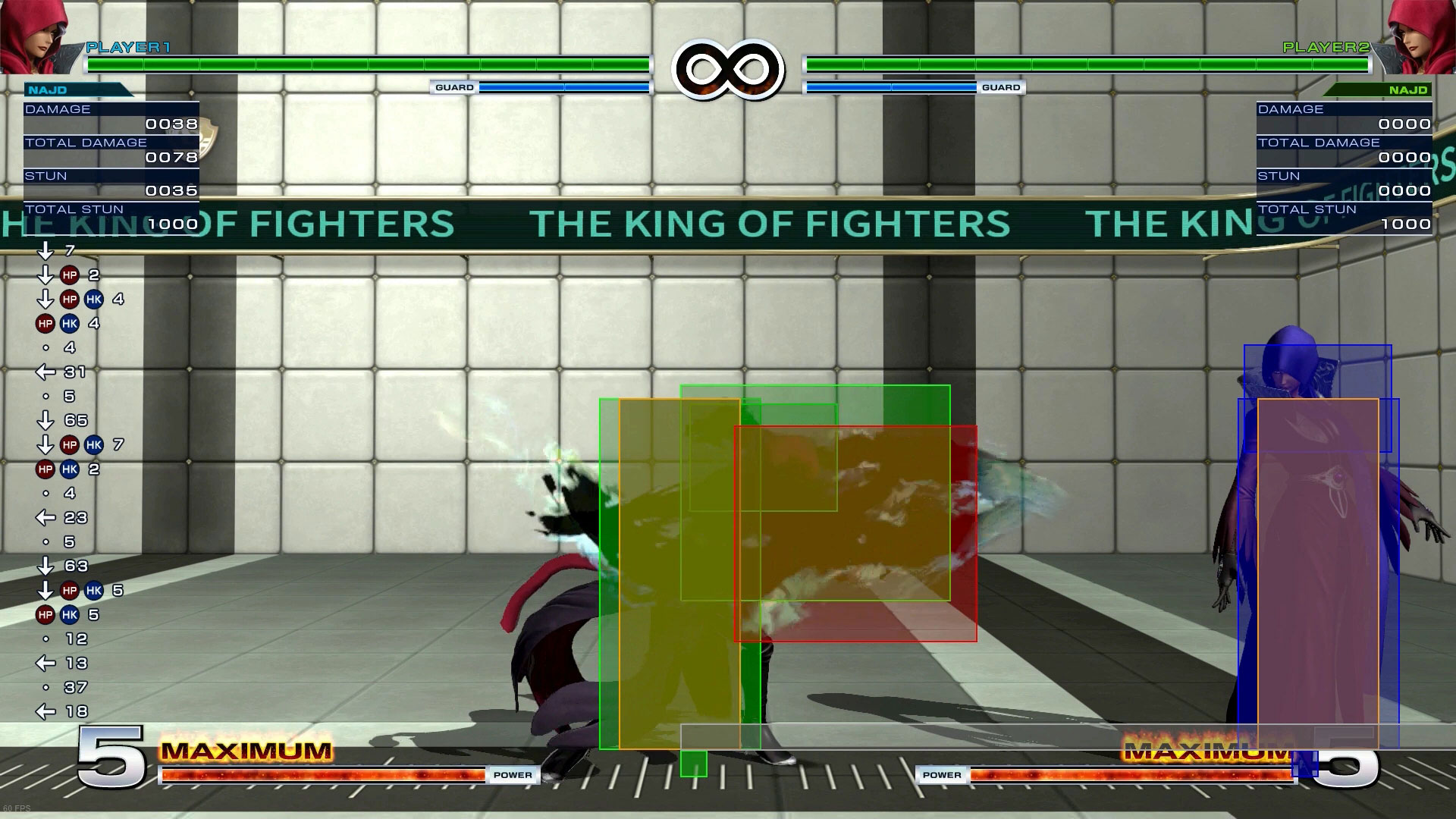 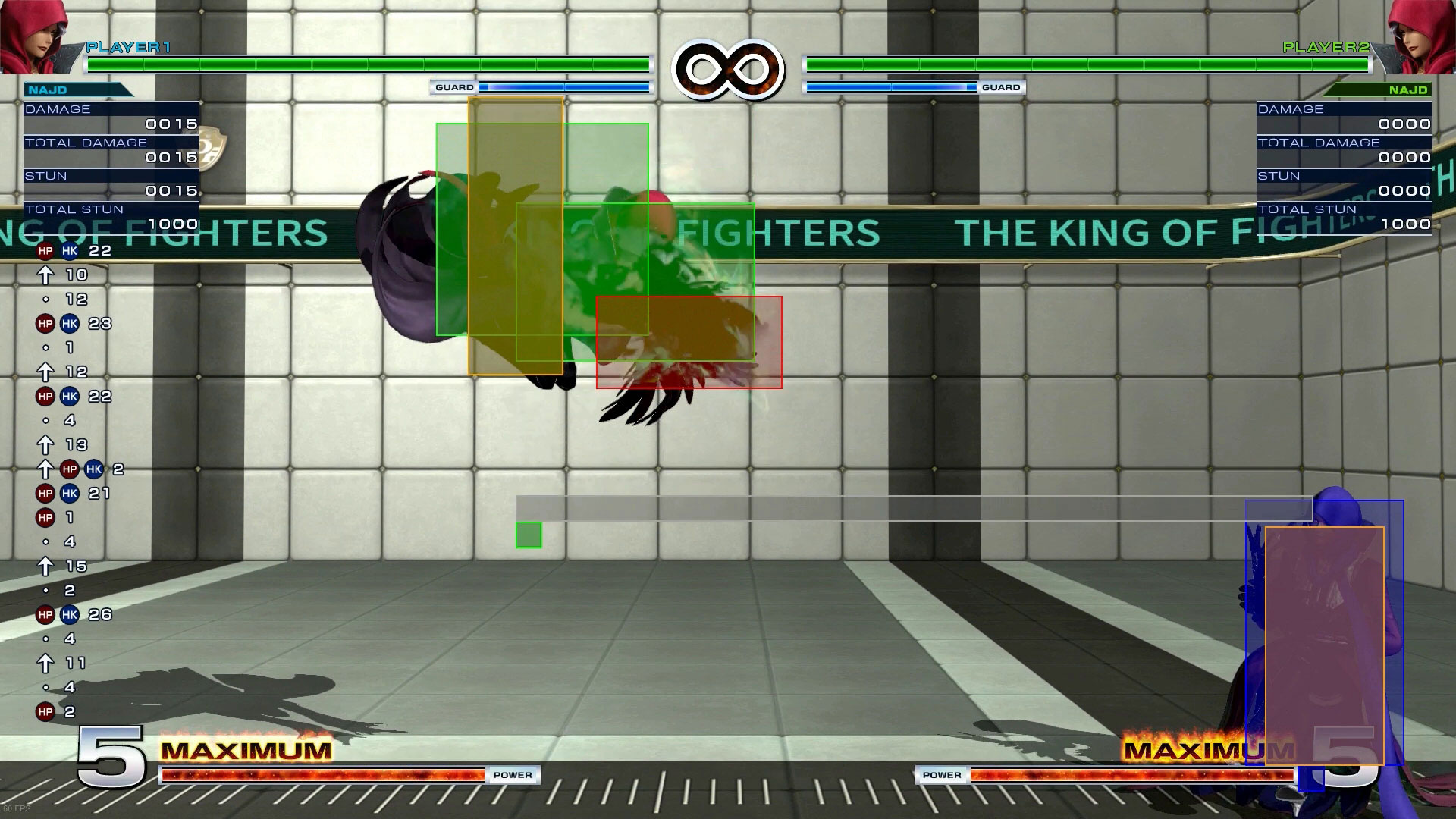 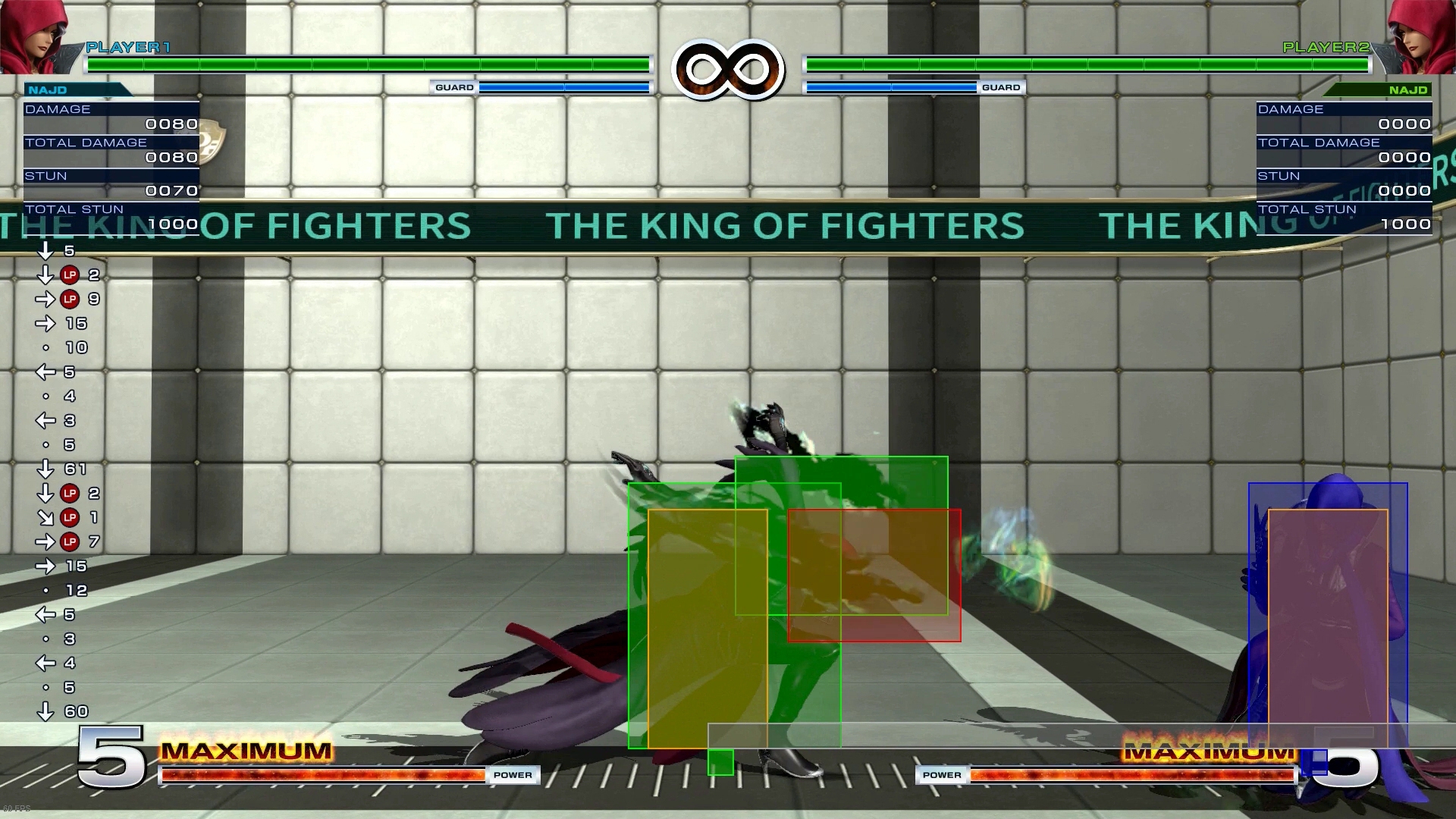 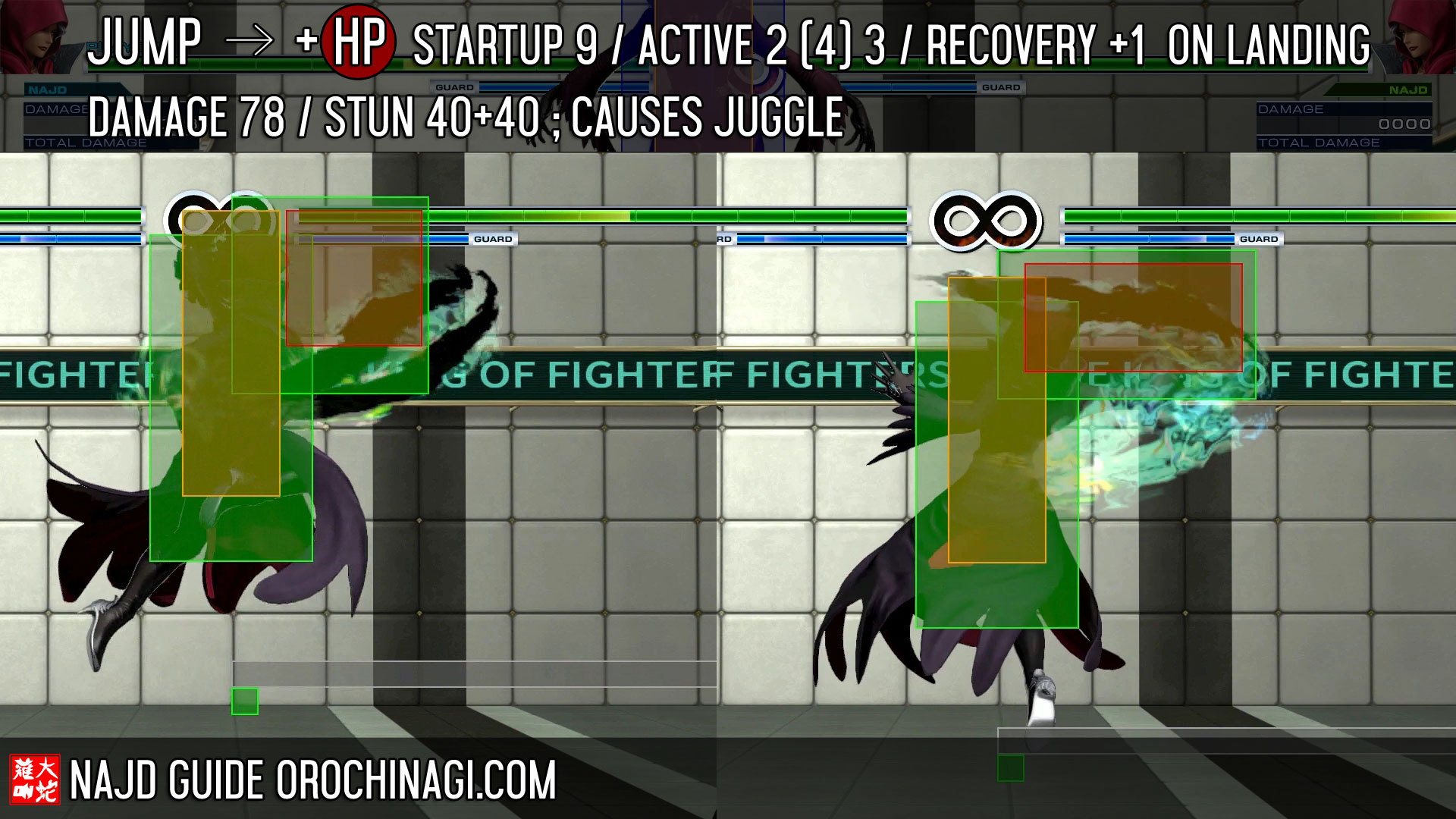 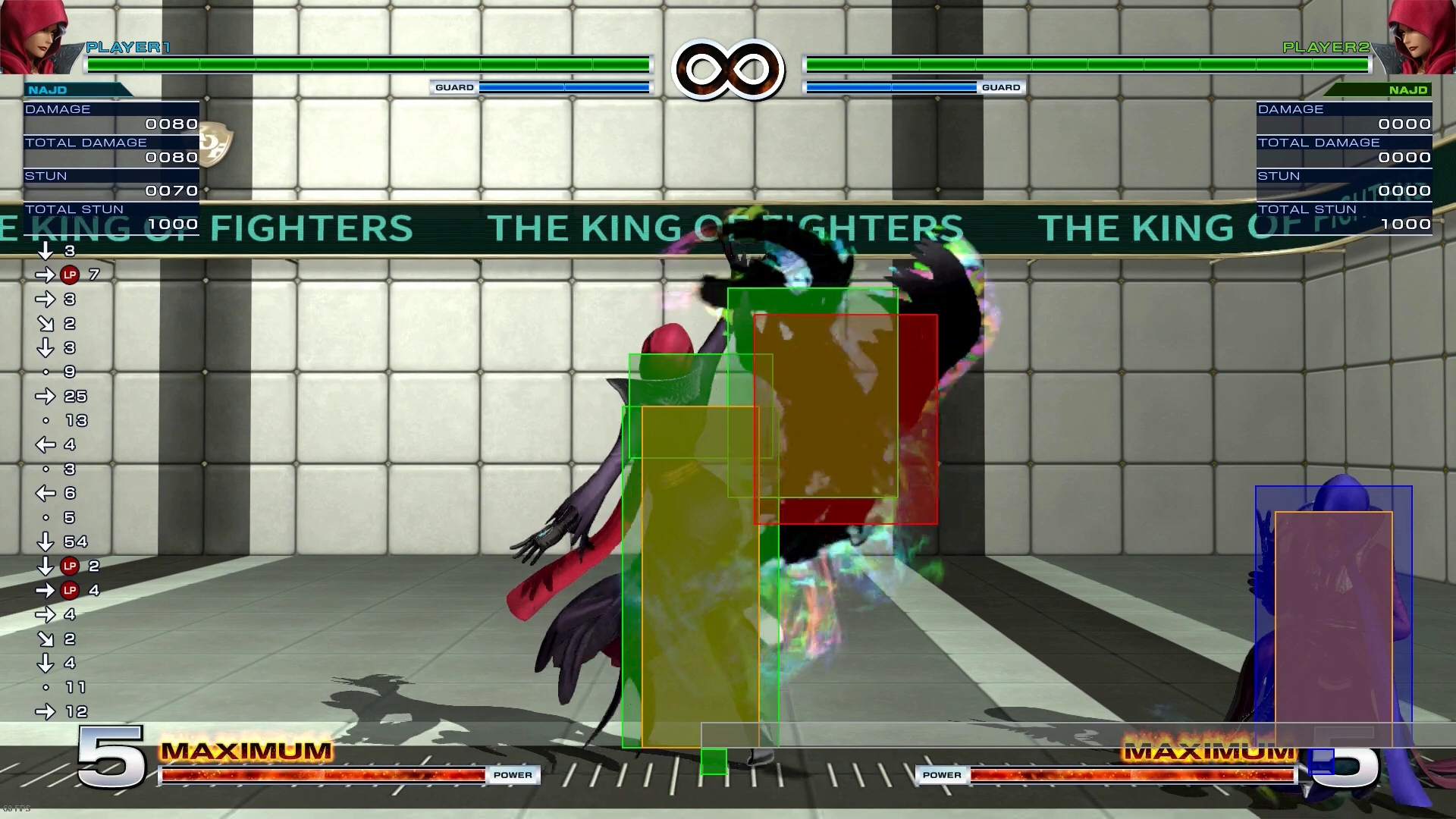 on Guard -5 means, as long as you hit the opponent, and just block afterwards, you are safe, unless they have a 4F move (that’s not many!). Use with crouching LP at range and you are even more safe, follow with a jump in or you could mixup with followups – the followups are not safe but you can cancel into her counters!

The counters are active for around 15 frames so if opponents try to cancel a move on the counter into another, they still get hit.

When catching opponent, if the counter message pops up, you can follow your counter with Roku.

Hold K “Retribution of the Unknown” aka “Roku” aka “Drop Kick”

Combo timing
The key is too let go after you execute the last BOP, don’t look at the screen for a visual confirm.

The first thing you want to do when learning to combo with Najd, is getting used to the rhythm of her blades of purity (this type of chaining move we call “rekkas”).  Just like Iori’s rekkas, they can be delayed a little and still combo.  Now choose a path to get used to:

Path A has a faster startup (5f), so it’s better to punish with.

Path B starts with 8f and so in max mode combos the timing is tighter but the trade off is more damage.

Regardless of path you also need to have the timing for the following combos learnt:

If you do the last action quickly enough it will activate her super.

Now it’s time to put these all together

Now we need to combo the Roku…

Hold HK for about 2 seconds before starting the combo.

Now do your rekkas and let go of the button just after you execute the final rekka.

When you’ve mastered that then you can start doing

At this point you need to learn combos because the opponent will be juggled depending on the strength of the Roku.

Check back later for more

The timing of the 2nd juggle is the hard part.

From far, Najd doesn’t have any projectiles so approach with a mix of hop LK or CD or HK at range.

When closer, hop again with early HK to keep the opponent from anti airing.  Hop LK can crossup and with its range stops a lot of things!  Mix in some crouch LPs and then go for the crossup HP.

Use her high counter as anti air!!!  Then when you think they will empty jump, use stand LP or punish with crouch LP, but beware of grapplers!

Playing defensive is part of a top tier Najd, because she needs time to charge that Roku… at least at the beginning of the round.

Iori users will feel at home with her air HP crossup.  The hit box of the jump HP isn’t that big, so practice finding the range to hyper hop after a blocked and even after a hit crouching LP.

After landing the crossup:

Najd doesn’t have to do much. Even button reading lv5 CPU has to pull out empty hop crouch attacks to break her guard.

Harass the opponent with the huge range of crouching LP and tick away with qcf LP (Blades of Purity aka BOP). Anything that tries to roll past will be punished by hitting crouching LP, which you can confirm after 3 hits and still connect with BOP.

BOP them. BOP them again.  They will get BOP’d.

Do remember that it is an 8 frame move, it’s not a reversal and it’s not invincible, so make sure you use it with crouching LP or use it to hit with the edge.

After a BOP, Najd will be pushed back so it will be harder to pressure, but a good hop CD can do wonders.

After BOPPING the opponent enough, you may notice they block standing.  The 2nd BOP is actually a low hit… so it will break their guard.  However, if they block it, you’re in a bad situation… but you still have a chance… as BOP can be cancelled into counter…

When you are confident your opponent will try to punish, follow rekkas into the counter or Roku.  Remember the third BOP doesn’t cancel into counter.

After a combo ending in full BOP (not EX), Najd can follow and attack with safe jumps, empty hop crouching combos or throws…

To summarise: Najd is a rekka character and should be played as such.  Charge the Roku with HK, and start attacking like an Iori, don’t BOP until you connect with a crouching LK (or LP as it’s faster) or jump HP.  Use LP to fend off jump ins, or use her counter.  When opponent starts blocking, command throw!  Mix up with pokes and throw out standing far HK!

Just like Iori, Najd can punish button presses after a jump in and a few crouching pokes.  Then Max mode… and you have options just like Iori:

Many advanced players will start the round by hopping back.   This is because they are charging the Roku with HK.  This means of course they can’t use HK for early jump attack pressure but after 9 seconds this means any hits with a BOP will end up with a juggle and serious damage.

To attack then, you’ll need LK on ground and air, with well ranged BOPs, try to go for the crossup HP, or even an empty hop into crouching LKs.  Keep the opponent back with your LP button.

Jumping into the corner against an opponent, if Najd goes for a empty hop grab and the opponent rolls past, they motion is an OS, and they will get hit by a BOP.