This guide is aimed at introducing, and helping, potential recruits to play Clark effectively. Here you will find enough simple strategies, and explanations, to set you on the road to earning those legitimate wins.

Welcome to the Clark Army!

Since the huge 2.0 update many now consider Clark to be a brain dead character, with only one game plan – to use B version command throw, in to super for some easy damage. Well I would like to say, and I think that I speak for most pre 2.0 Clark users, that if you are indeed one of those people who use Clark in this way… please stop.

Clark is a character designed to be played exactly how his persona suggests – up close and in the thick of battle. As an old soldier, Clark is quite used to seeing bits of shrapnel narrowly missing his face, so someone’s foot shouldn’t make a difference, right? He is agile, intimidating and able to cause a ton of damage, with very little effort. He is also very versatile, can be placed in any position on the team and is able to be played with as much, or as little technical know-how as you are willing to invest.

Although Clark’s basic game plan can be easy to grasp (get in, utilise Kung-Fu Grip and win ) he isn’t really an entry level character, and has many nuances. Of course, your own personal success will depend equally on your knowledge of Clark, and on that of the character you’re fighting against. First and foremost he is a grappler and all grapplers, no matter which game you play, require you to learn your opponent’s move set. That’s 54 match ups. Think about that.

Using Clark effectively will require you to practice your ability to whiff punish, play reactively, utilise good spacing techniques and to also read your opponent well. There are no invincible dragon punches, no high priority normals or any specials that leave you with a distinct frame advantage.

Previous to the important 2.0 update, Clark didn’t have many defensive options. He still doesn’t, despite what you may think of his armoured grab, but that isn’t as important as his main game plan… of attack, and counter attack.

Clark sits best, and also rather uncomfortably, just outside of most character’s normal attack range. Your consistency at maintaining this range will be one of the largest weapons in his arsenal. He has long limbs and can use both Crouching C and Crouching D as tools to whiff punish and to begin a counter attack your opponent. 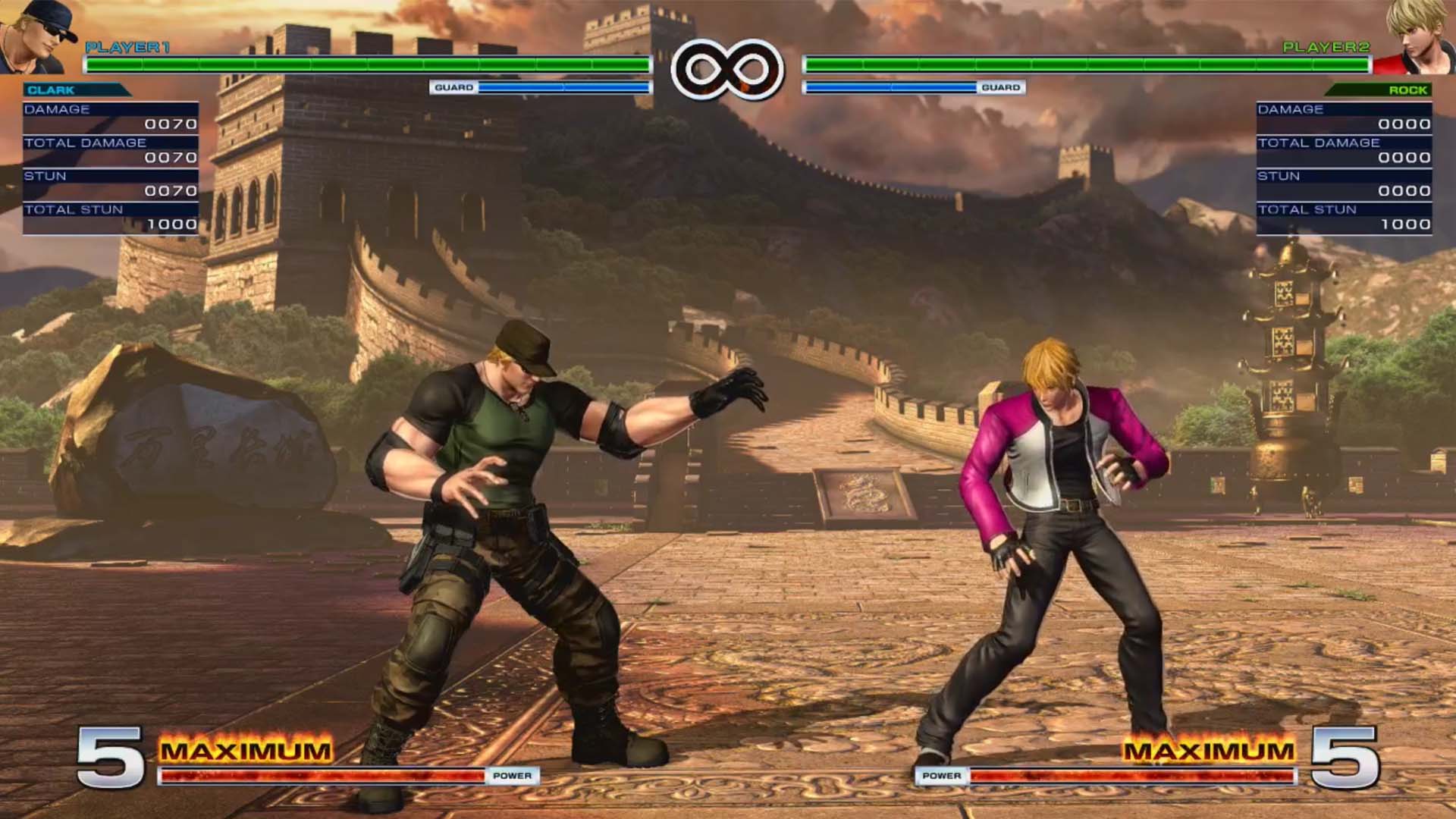 Clark works well at this range. Its close enough to dash in and grab, but far away enough to whiff punish.

Standing C can also be used to good effect, but it will whiff when used against most crouching opponents. For best results, use this move at will on ‘big body’ characters like Chang, Maxima, King of Dinosaurs, Xanadu, Daimon, Antonov and Verse. 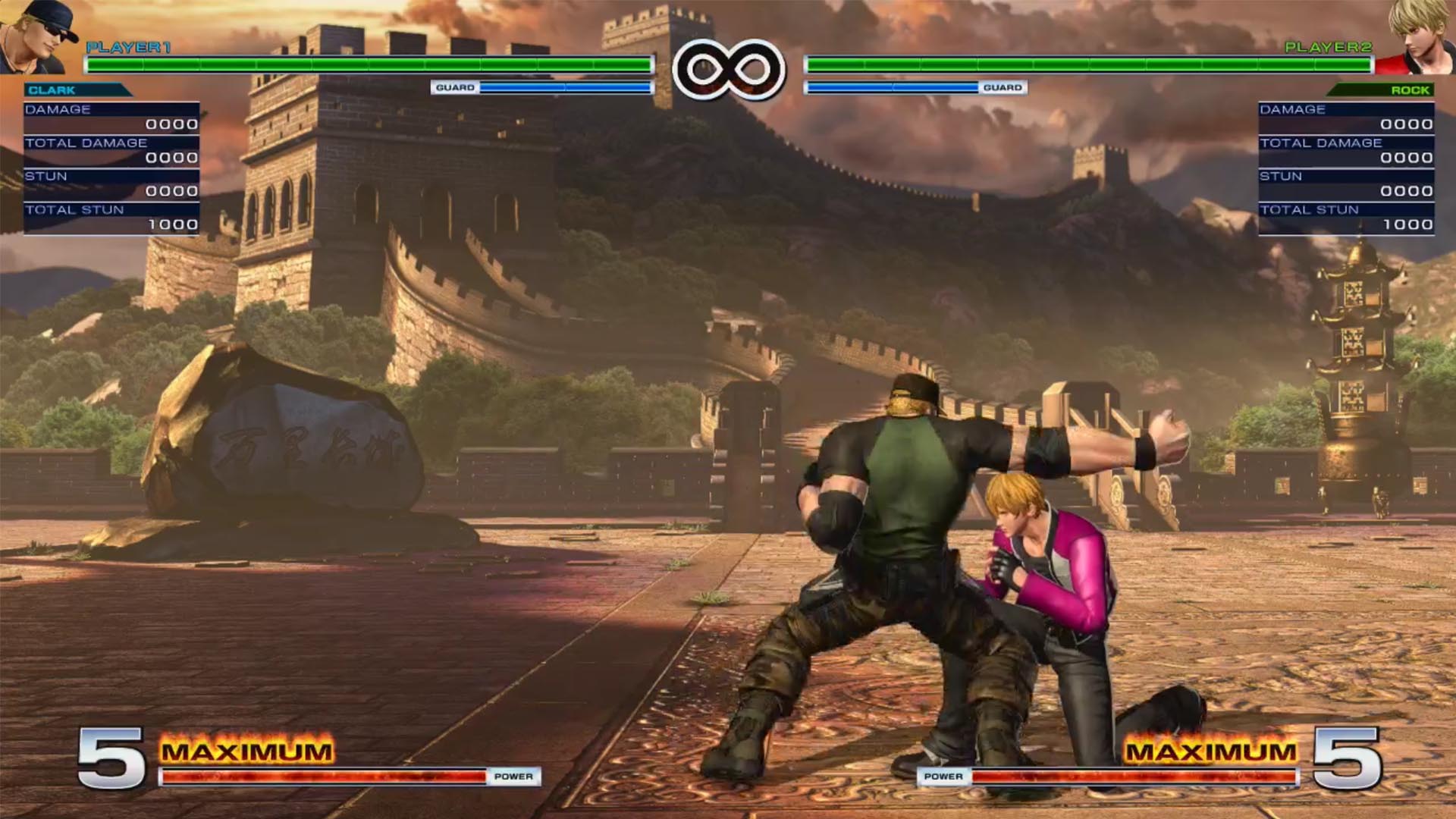 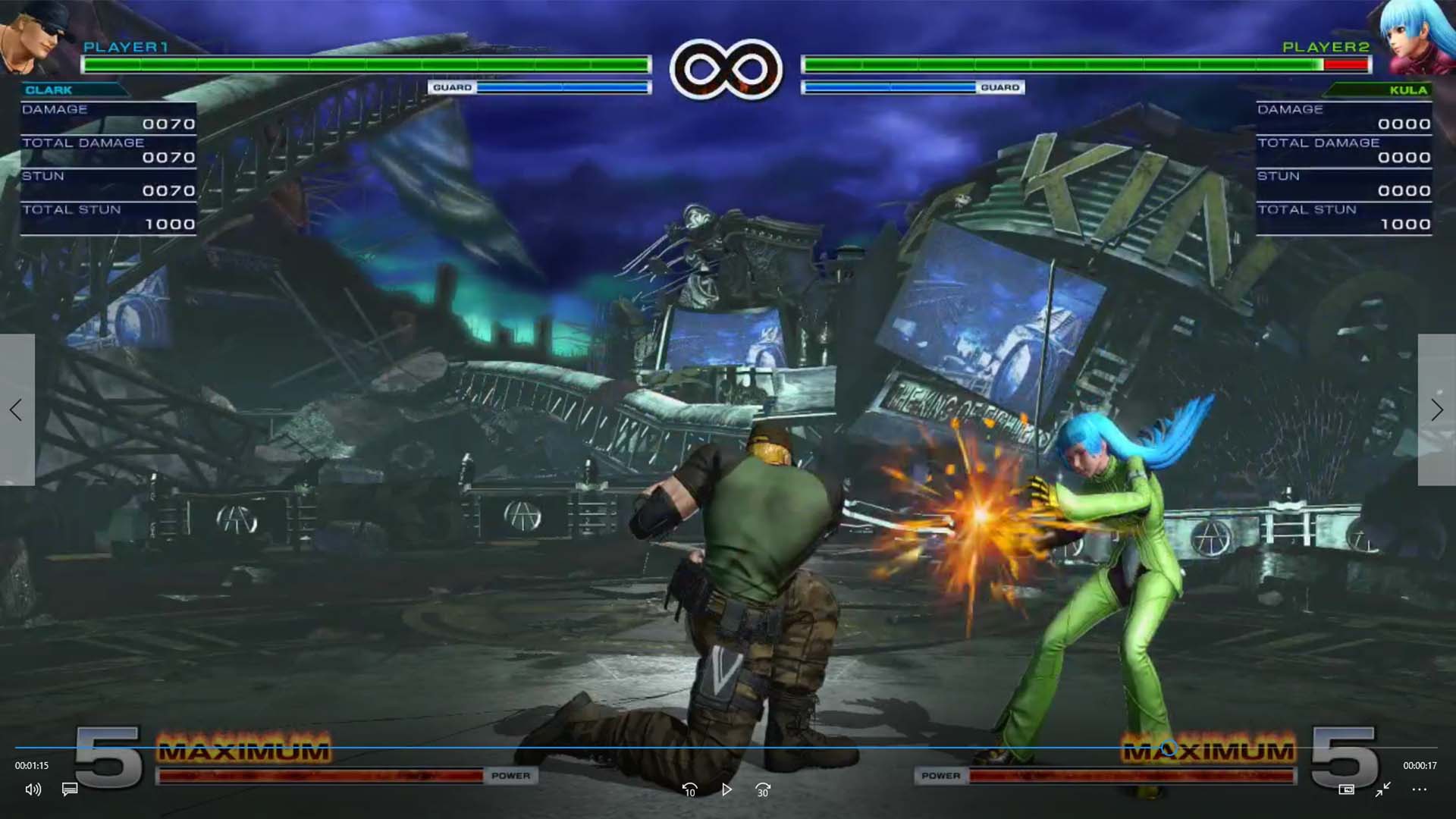 Crouching C is fast, covers a large area, is the perfect whiff punish and can sometimes be used as an ant air.

Clark’s normals are deceptively good. At first glance they seem to be slow, cumbersome and hit at awkward trajectories but, when you begin using them for their intended purpose, you start to see them in a whole new light. When you remember that they are designed to keep people in place, you start to appreciate their odd hit boxes. 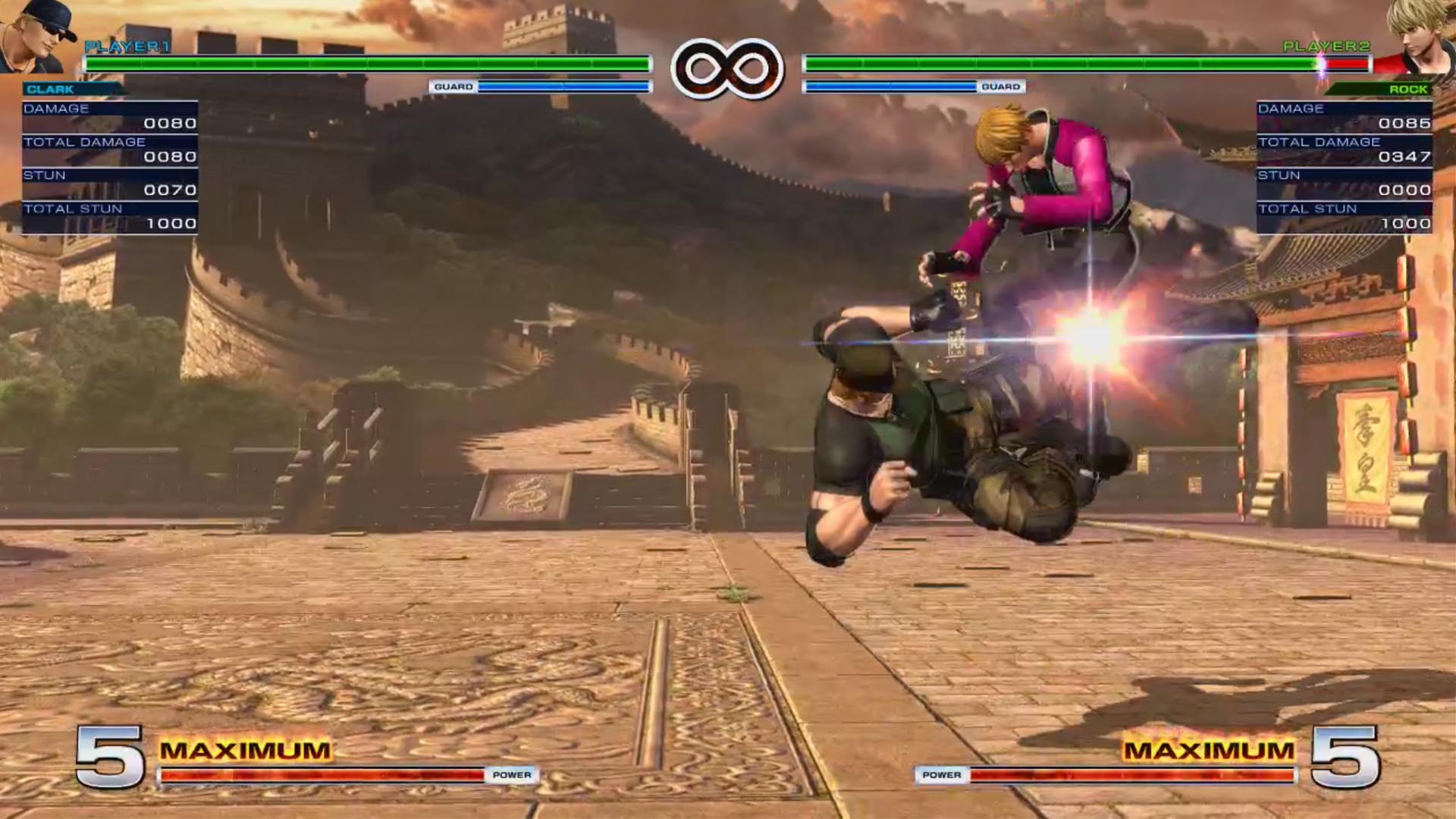 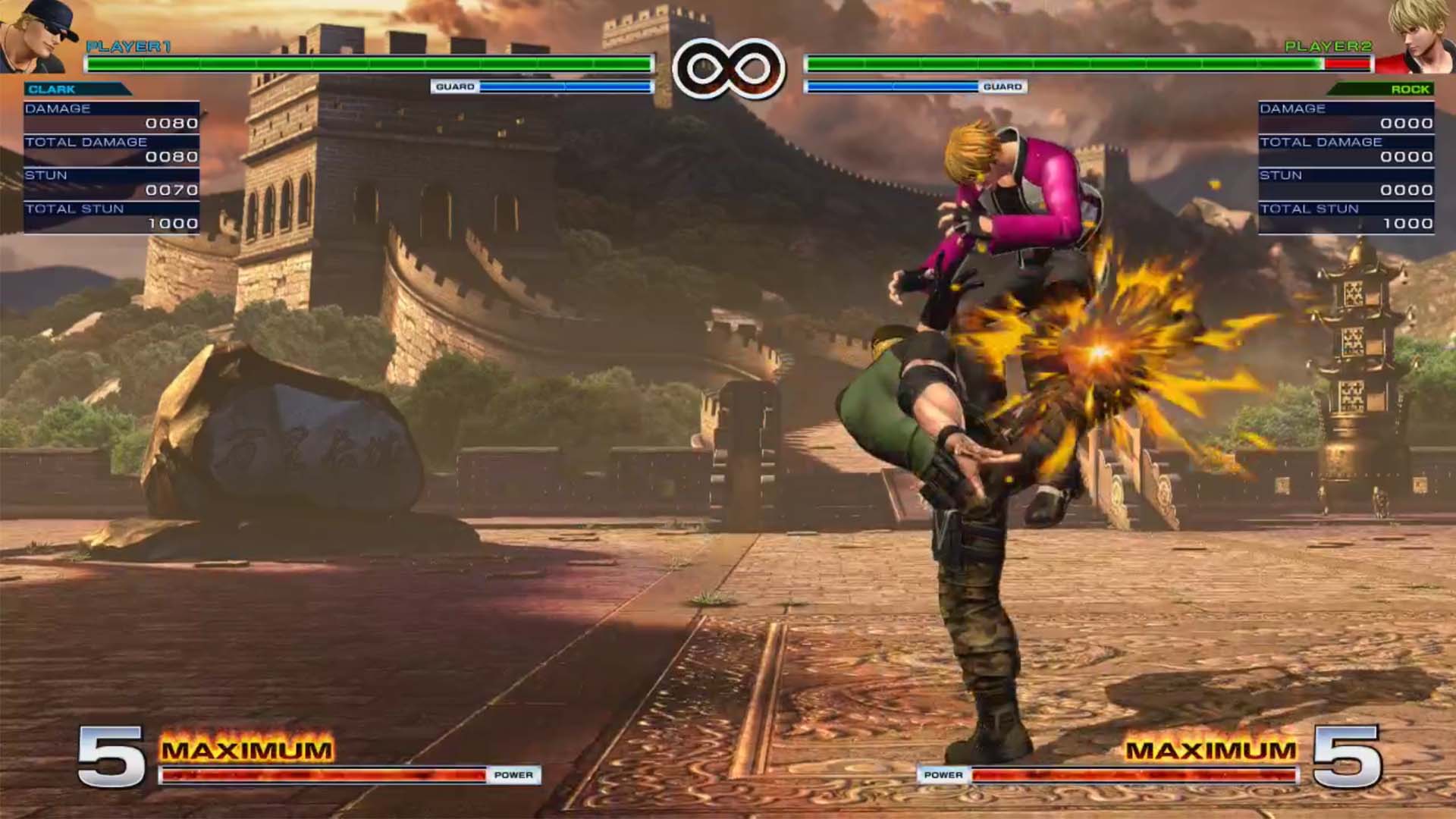 His normal move set is designed to keep people grounded, punish them for pressing buttons and to stop them from jumping upwards to avoid his grab.

In the air, especially when low jumping, two of his most useful buttons are A, B and D. The former, because of its angle (which hits ? and ?) is great for annoying grounded opponents as you make your entry. The stun they encounter on impact is usually sufficient enough for you to be able to follow up with something afterwards. Using B in the air covers mainly this angle (?) and is great for reaching that much further, or even stopping aerial challenges before they get off the ground. His third most useful air button, in my opinion, is D which has this angle (hitting ? and ?) it can challenge in the air, but doesn’t have as much priority as the other two buttons.

At close range, your opponents feel even less comfortable, especially since the 2.0 update. Clark is a monster in close combat, with the ability to inflict quick damage and keep the enemy in a loop of pain with the safe jump he earns after the flashing elbow. His main weapon up close is the Super Argentine Back Breaker (SABB – Half Circle Forward, B or D) The B version now provides a couple of hits of guard point, a mechanic which nullifies damage until the grab becomes active, while the D version is active after only one frame and is most useful for quick punishes.

All his normal moves combo into the SSAB D version, apart from close D and his command normal overhead (fwd B).  Only Close C can be cancelled in to the B version.

Clark has a number of basic strategies which make his life easier. Here are a few of them: 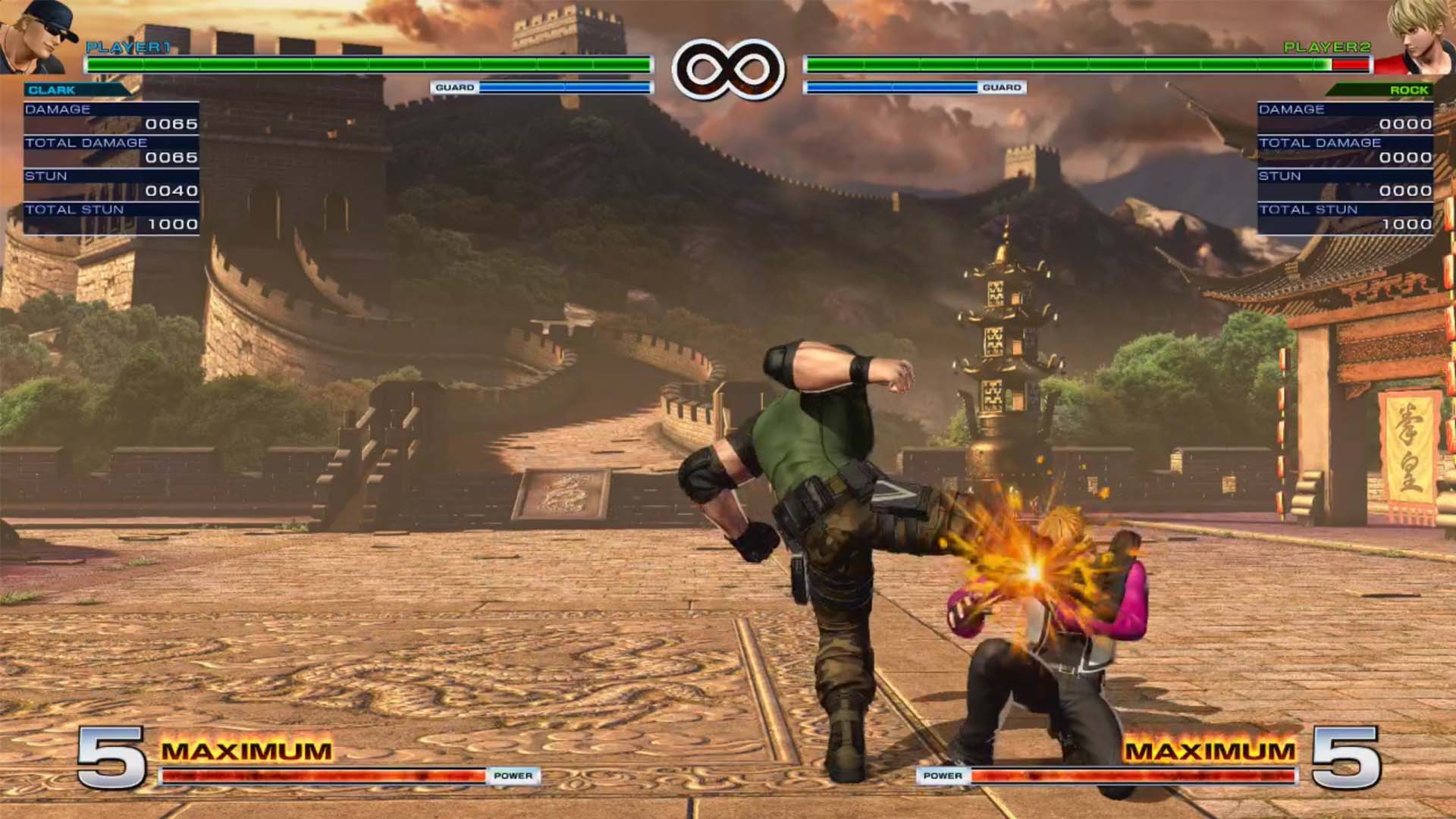 The only overhead in the game, to retain its properties at all times.

2. Super Argentine Back Breaker (B Version). The SSAB (Half Circle Forward, B or D) now gives you about 2 hits of guard point nullification. This means that Clark will not take strike damage, while the guard point action is active. 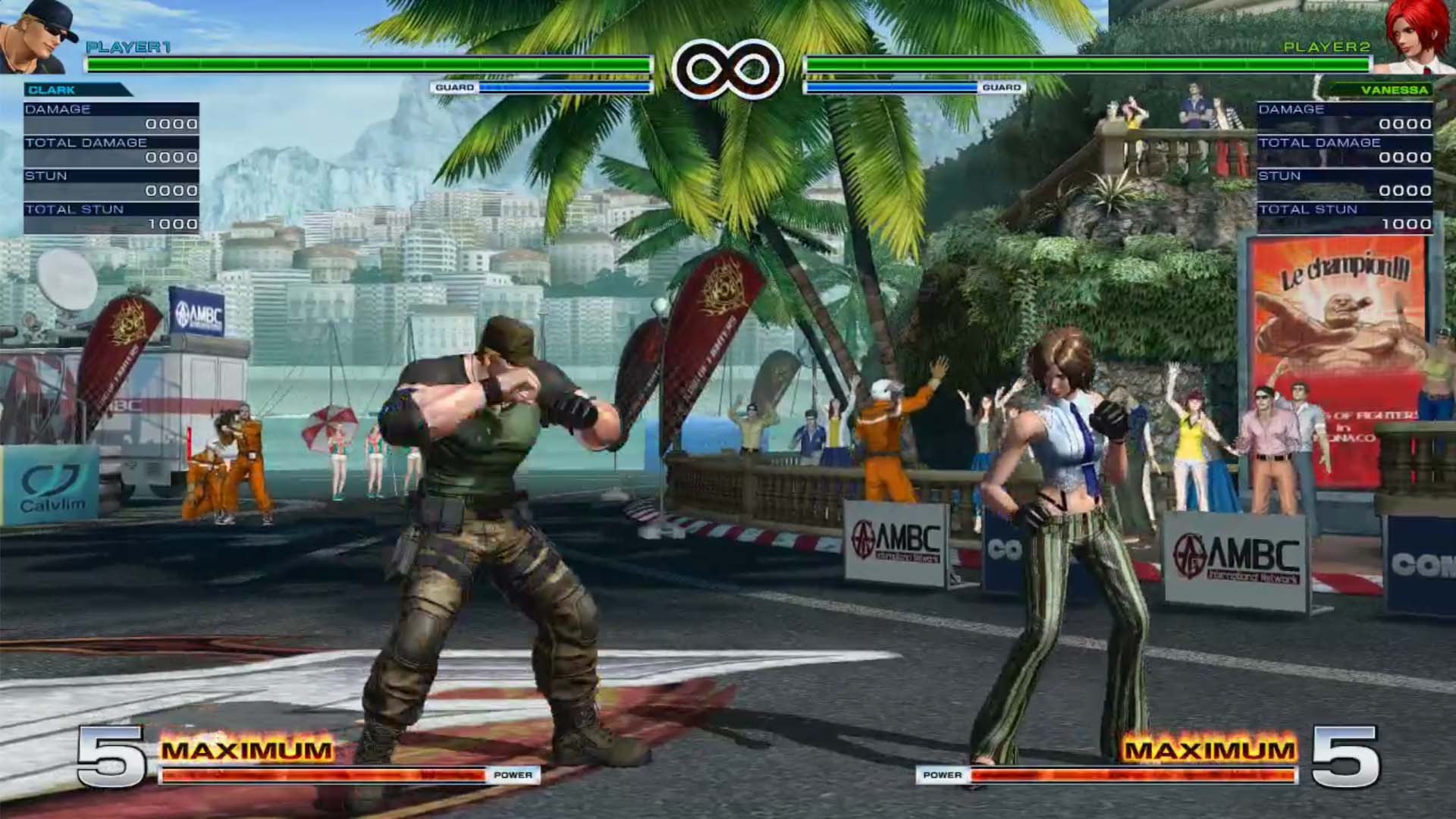 Clark’s SABB (B version) has start up frames, during which he is vulnerable to strike damage. 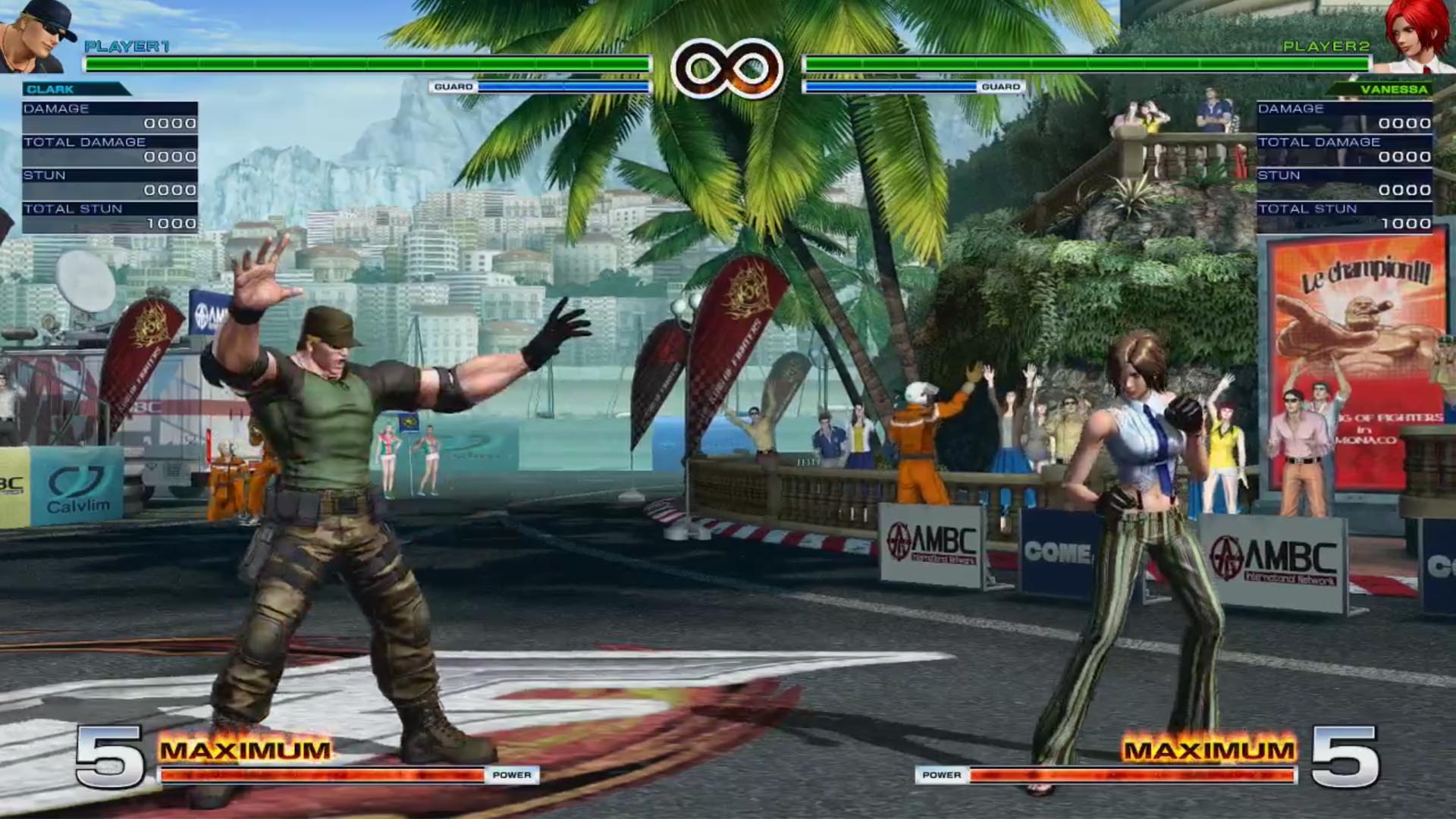 While Clark’s arms are raised, the guard point is active.

This sounds great, until you consider how easy it is to misuse. Clark was given this ‘buff’ to be able to deal with the characters he previously had no answer for, like Leona, Mature, Terry and all of the characters who have rush specials which previously could not be punished effectively. When you consider the situations this new move can be used in, you’ll begin to think outside the box. It is incredibly easy to bait however, so be sure to use it wisely. 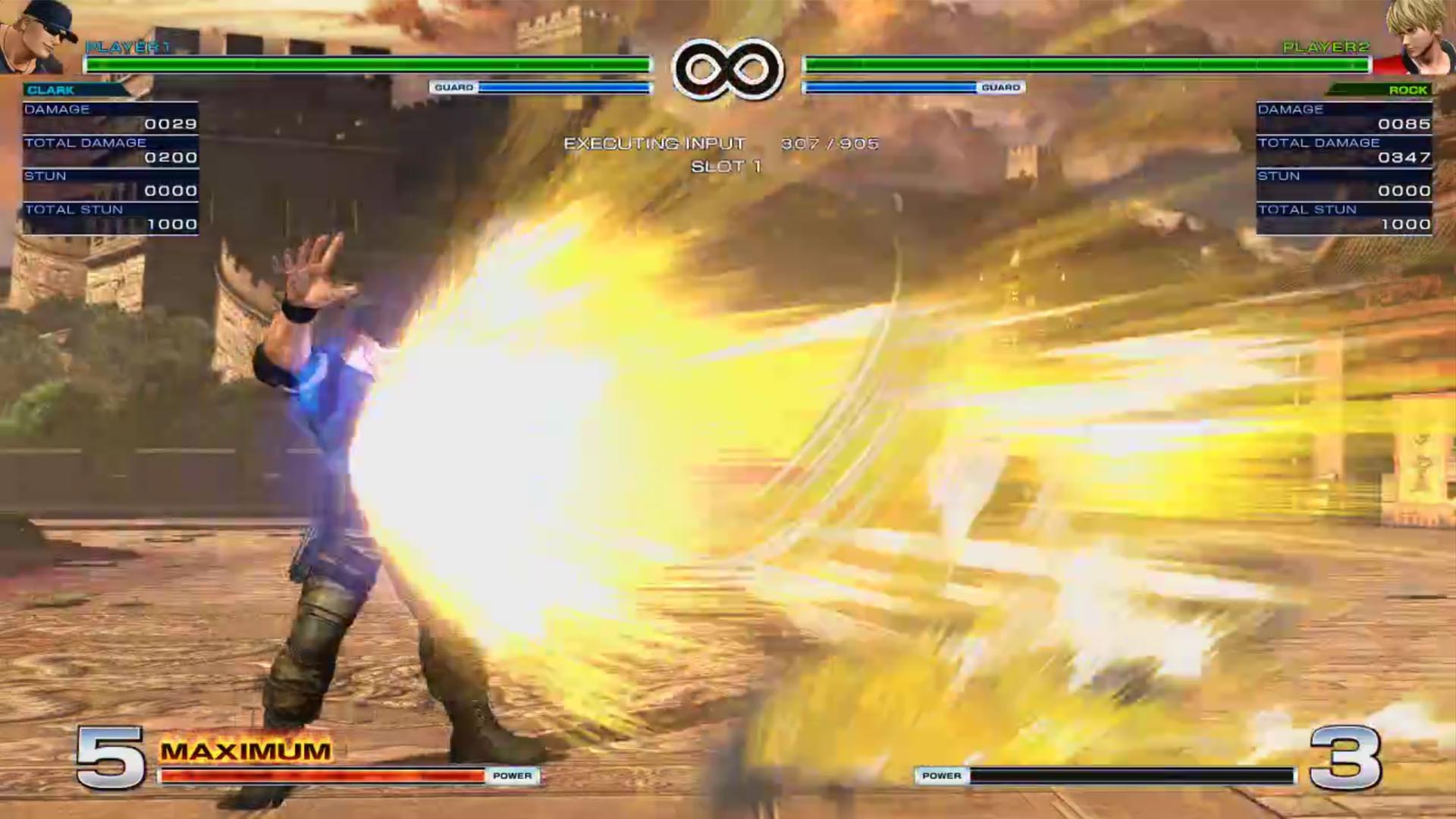 Clark is now able to stop, and punish, all kinds of physical attacks.

3. To UABB or not to UABB? The Ultra Argentine Backbreaker (Half Circle Back x2 A, or C) is the powered up version of the SABB. It’s the move you now get for free after the flashing elbow, and the one which apparently makes Clark brain dead. The truth is, using this move isn’t always the best choice in a match.

Not only has the damage for using this super been reduced, but when you use the UABB after the flashing elbow, you lose your positional advantage, the opportunity to safe jump and with that the chance to continue the pressure for even more potential damage. You also lose, depending on Clark’s position on the team, any meter which could benefit a character you’re stronger with.

4. Far Normal Cancelling. Sometimes it can be hard for Clark to get close for a hug and, in those moments, it’s good to consider cancelling your far normals (including Crouching C) in to either a super move or a max mode activation. All of his heavy normals move him forward, ever so slightly, which can help cover that extra pixel needed to confirm a whiff punish.

Controlling Clark, just like any character in KOFXIV, will take persistence and probably a ton of losses to begin with. You’ll find that using him is very unlike using a character like Terry, Robert or Iori who seem to have an answer for everything with high priority buttons and a free get out of jail card!. None the less, Clark is a great character and is a ton of fun to use.

I hope you’ve found this brief introduction useful and, hopefully, it will inspire you to learn more about this amazing character! Once you have mastered the basics, be sure to dig in to the other tips in the main part of the guide.

[ back to Main Clark Guide ]

[ back to character select menu ]