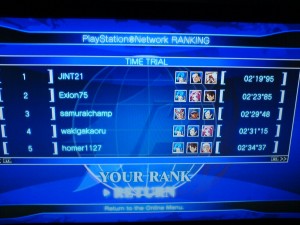 If you’re having trouble beating the?clock (and getting the trophies) read this! 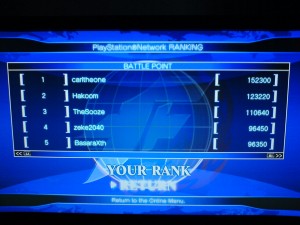 Note: Current leaderboard #2 (Hakoom) has?confirmed to have boosted (beating a friend repeatedly) to get that score, casting?suspicion over the others- check the ranks?guide below?for more information, or even to learn how to do this.

Your rank is decided by how many matches you play.? It doesn’t matter if you win or lose!? This has caused a great controversy as it has been discovered that so called ‘SSS’ players have been simply opening a room, setting their pads to autofire and leaving the console on overnight. Wins in PLAYER mode do not count. Ranks have no link to battle points, as you will of course lose points for losing, unless you invite a friend to an arcade match and repeatedly beat them.? This would require a turbo/macro enabled pad or stick and two ps3s or 360s.