So we were looking over La Fourchette and noted a lot of the offers had a slight catch to them: 30% off a set menu and so on, but the aim was to find otoro or just very good tuna.  Checking some reviews on cecj, and picking through the mass of comments on trip advisor and lafourchette, Yushi seemed interesting because it was noted to serve good, fresh ingredients.

It was also noted that Yushi was not an authentic Japanese restaurant. However, in my experience, ingredients and skill are more important than nationality. I’ve been served the best Japanese curries by Indian chefs. Not to mention I’ve also been served crap by foreign sushi chefs, the point is not being prejudiced.

Being at Trocadero, Yushi seemed like a good central location. It was also easy to find, perhaps 5-10 minutes walk from Trocadero.

The restaurant had it’s own take-away next door, which looked far too cheap and reduced the shine of the venue next door. We were to discover later that the (of course) sushi sold there (at a cheaper rate) came straight from the chef. It just looked so bad in the box, it was hard to believe.

So here’s the menu.  WOAH the prices!  This better be good! 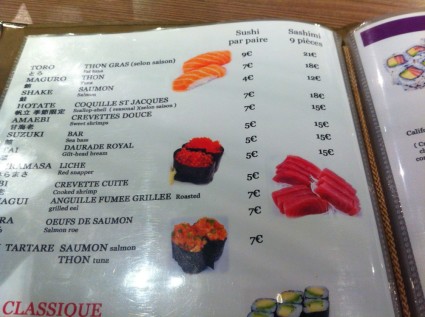 As soon as the camera came out, the chef starting grimacing. This seems to be a trend where ever I go. Perhaps it’s rude, but journalism makes no exceptions. The chef was indeed Chinese and his apprentice (I assume) was a French caucasian. Interestingly, the chef started randomly throwing out Japanese phrases such as “What is this?” “I see, I see” and “This looks great”. Tactics. Uhuh. 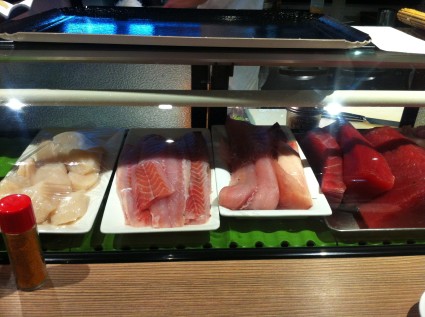 That little black thing, presumably some skin or some part of the fish, did not go unnoticed. Not a good first impression.  However they did offer types of sushi that you won’t find on the standard non authentic menu, such as scallops and unagi, so they get points for that! 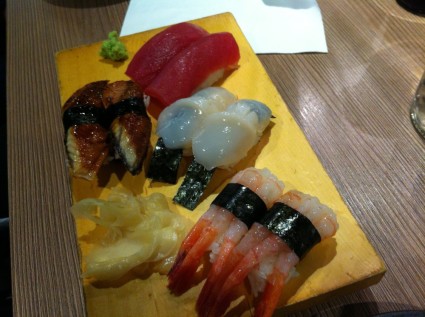 The scallops were nice and fresh! And it went downhill from there.  Tarma noted the rice wasn’t up to scratch – a little undercooked and lacking in vinegar.  The unagi was ok, great sauce, not so much of an eel taste with a consistency of paper mache.  The amaebi was generous (3 shrimp as opposed to the usual 2) and was fine. The tuna was… okay, better than supermarket tuna, certainly better than your average non authentic Japanese restaurant…. but at this price… you’ve got to be kidding. Otoro was off the menu, perhaps luckily, for my wallet. It’s understood that we’re minutes away from the Eiffel tower and in an expensive district but… I’d rather travel.

The service was long (we were maybe the only other customers in the restaurant) but the waitresses smiled enough. The final bill was less than we expected, we paid 7€ per pair as opposed to 9.  I’m hoping this wasn’t in response to the silence as we ate.

If you’re desperate for some above average sushi (and that’s not saying much) and you’re in the area and have money to spend, then sure, otherwise, we cannot recommend this restaurant.