Think about which characters you would like to use.  Are they available now?  Or in the future?  How much time would you like to spend on the game?

If you invest in option 1, one character, it can take you to at least level 50 difficulty quests without worrying about the other two in your team.  Because of the leverage system, your character has a weakness against a certain colour type and will get hit for 50% more damage.  If the difference between you and your opponent’s level is high enough, you won’t care.  But you will, at some point… however, with some manual tagging out or taking control in fights, you may survive.

Another option is to do a festival and get a strong character without much effort.  A common “free gift” team for week one players is Mai 95, Kyo 96, K’ 99 and Kyo96.  Week 2 players often have Athena and Terry96 in their team.  These teams were formed from free summon tickets and festivals.

Option 2 is better but will cost more time and resources.  Eventually you’ll need to do a quest where all three characters are needed on the screen at the same time.  You’ll have more fun using characters you like.  Most players do this.

Option 3 is going to the most adaptable and flexible team, but will take the most time to level up.  Players may not even use them until there is a specific quest requirement which could be done by having another member take care of it.  If you let the game pick for you, by doing all the quests, you may end up with a team regardless.

My personal recommendation is to start with 1 main 5 star gold character and then grab the next 5 star characters that you like, one of each colour.  Do not start with two of the same colour in your team (unless you love them).

When you start you should have one summon ticket to use and the game is more likely to give you one when you have nothing.

From the first line up, these characters are highly rated.  In fact, pretty much all the 5 star characters are great.  They appear as red icons in the summon lottery.  Here are some to look out for.

The box can shine yellow then change to red, or even change to red at the line up screen so don’t lose hope when watching!  You can watch the infinite reroll here. Keep going till you get a 5 star that you like.  Kyo 96 is a popular choice because he gets a lot of souls from the quests in the early start of the game.

However, it should be noted that any character can be levelled up to max and any of the top tiers  can be destroyed by the opposing colour.  That’s the leverage system.

At any rate, the next character to pick would be part of the start of whatever event quest is happening.  The game starts with quests that boost Kyo 96, then it went to King 96, and then Terry 96.  It will probably continue with Mature and Vice.  Look at the Event Quest and see what ELEMENT boss is there that you can farm for souls.

2. Daily tasks you should do:

NOTE: If you want to get a guaranteed summon, you must not spend ANY rubies.

The trouble with flying through the ranks is that if you reach another rank, your AP will be refilled.  So if you spent any AP elixirs or bonuses to fill it up just before this point, it is a waste.  Keep an eye on your AP level and don’t use a lot just before it’s about to fill. 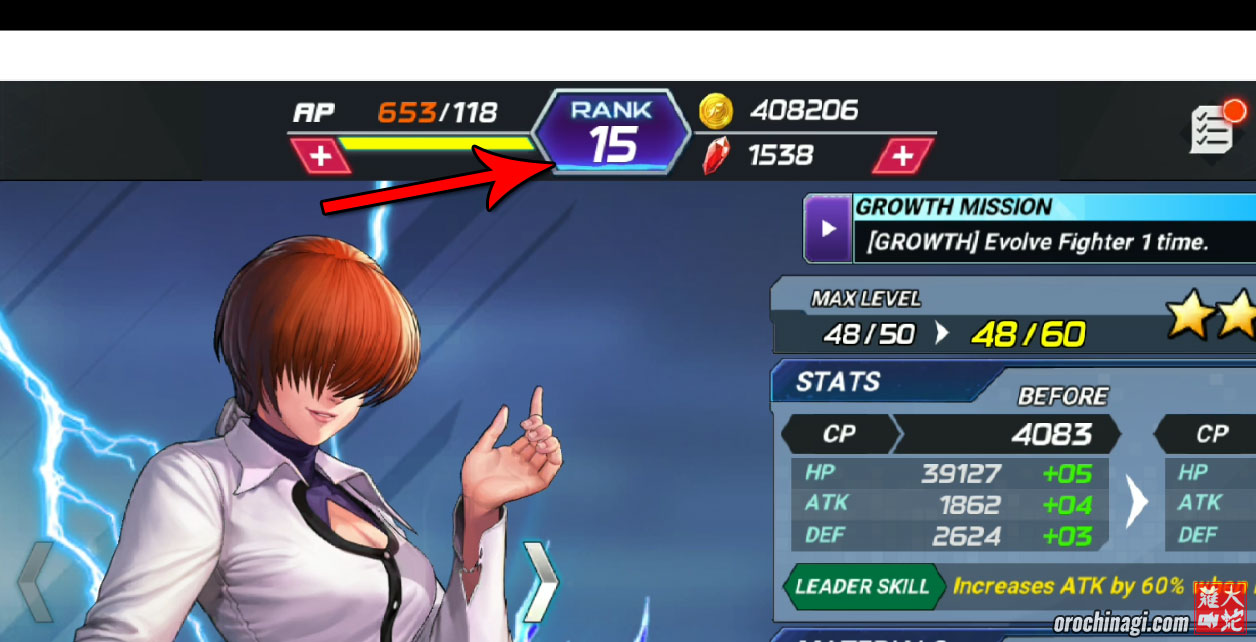 3. Stuck or blocked by difficulty

When the quest appears that asks you for a character you don’t have, or the quest may let you win just by having them tag in, or just by being there. If they need to fight, you may still pass the quest if they are knocked out.

If you’re stuck with a quest that is too difficult, for example a story mode or a quest that needs three characters that you never levelled up at all, skip it, do not waste time!  Do something else!  Check the list, as you only need 6 quests to get the daily bonus!  Go back to the dungeons and keep getting EXP, money and cores for your team.

While going through story mode there are chests to pick up! 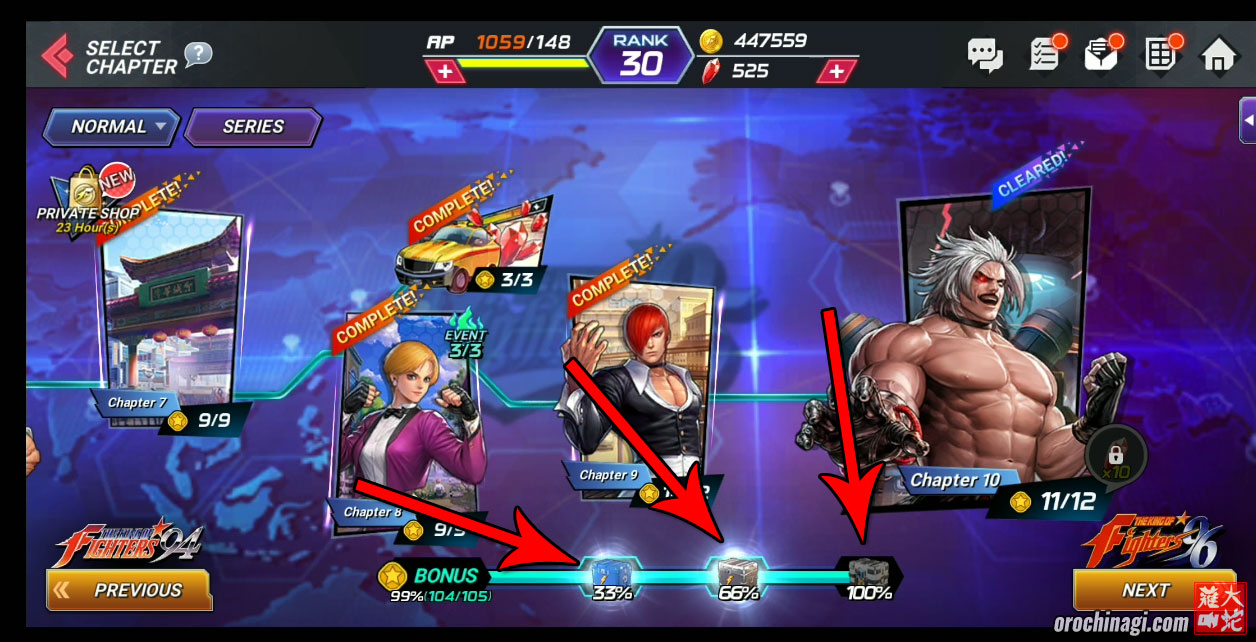 Thanks to Warlock for the chests tip!

Back to KOF ALLSTAR Guide INDEX