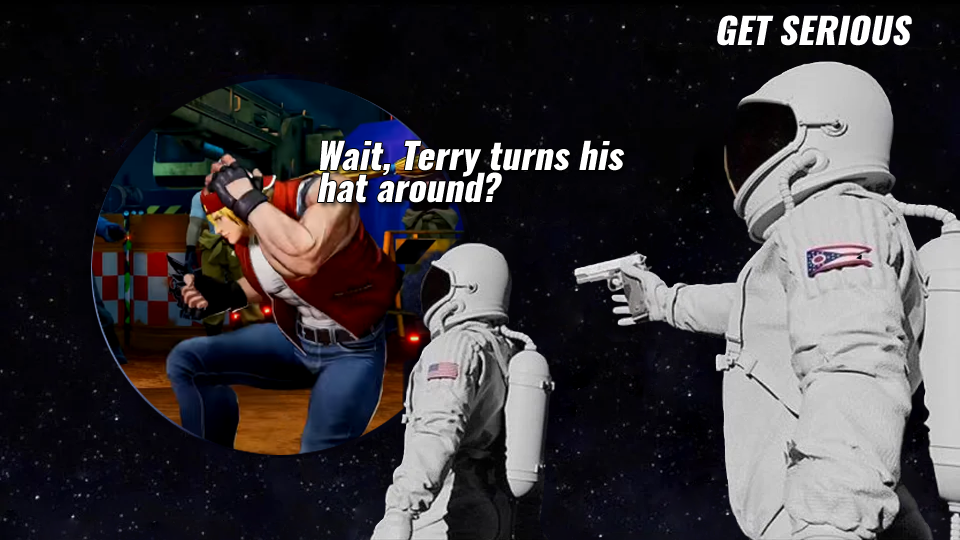 It’s more or less KOF day!  Happy day from Chiiro to start with!

Now, the veteran Oyaji-G is back again with some tips and tricks for you intermediate fighters, with some things that will help beginners too!  Check out the wonderful highlights and there’s many more if you follow these people on their twitter!

So, after yesterdays deluge of combos, it’s starting to become clear that we’re going to have a lot of fun, and I don’t think those 5 bar combos will be patched, remember that the last character will be using this as a comeback mechanic, and that’s only if the first two characters didn’t spend all that meter already.

Last night I tried the ranking mode, where the CPU evaluates you through 3 games.  Be prepared to be shocked when you reach the third match. The CPU is input reading!  Wauhti demonstrates! – And yes I got murdered!

KOFXV offers you to play against 3 CPUs to get preliminary ranking in online mode but those cpus are input reader tier. CPU will dp or super pretty much anything what you are trying to against them

KOFXV is climbing up the Steam charts, at least in awareness!

That’s a wrap of my Isla shoot with @chewyco ?

I love teaming up with @KochMediaUK thank you for this awesome opportunity. #KOF15 #AD https://t.co/2r2wFpXPDa pic.twitter.com/yC6CfMFQDf

I would post more KOFXV art and cosplay but it takes time to go and ask and wait for a reply, I’m assuming western twitter users understand embedding is not stealing, but I’ve had some drama in the past with Japanese twitter so I’m treading carefully!  If you want more art and cosplay, follow me on Twitter, there’s tons of it!

Koch Media is giving away some KOF15 copies so get in there if you’re on Twitter!

Now, I refuse to understand what I’m looking at, but Tatsu is indeed correct about the choice of soundtrack.

the realest kukri players practice their combos to this song pic.twitter.com/n7WhoMwFcj

There is a ton of nostalgia in KOF15 so it comes as no surprise that Andy’s command move is invincible, as it was in Fatal Fury, as it was his dodge move!  However this might be a coincidence and may get patched out!  Enjoy using it now!

While some players have been focusing on doing maximum damage with full combos, the real stars in my opinion are those who are working on maximising damage with one or two.  Here’s UFOrange with one bar for Angel.

Following that we have the all star Haregoro with a fantastic 2 bar stun.  Of course he found that combo, you say, because he’s the bonafide #1 Joe specialist in the world.  Yes, I concur, you are absolutely right.

Vanessa, lots of punching, but you like that, don’t you. Punching someone like they’re a punching bag, as if they said something bad about your open toe sandals… but this is worse because it’s going to confuse the hell out of the opponent.  Cross unders fly under the opponent, at which point they have to focus to see which side to block.  Or they panic and take back any statements about fashion sense.

James has been looking at doing moves in the air, which is usually done quickly by doing the Tiger Knee (TK) motion which is qcf uf or 2369 aka ???? but it seems to have been disabled or just made really difficult in KOFXV.  So it seems there is a minimum height to be able to execute this. This has been done intentionally to stop infinites.

You can use tk raiouken to beat wakeup mash and throws as meaty. Its really advantageous oB too #KOFXV_Yuri pic.twitter.com/Qgkl1USHrI

Speaking of TK, the other way to do instant airbourne moves was to back dash into it.  Kirisamecho has found another way, by doing N214N4 then N4N214 – that’s neutral then qcb, neutral then back + K, then neutral, back, neutral, qcb K. Well, that’s how I understand it.  Take a look:

Why is it useful?  Because combos that’s why! But we’ll have to wait to see if this gets patched, or if someone can find a way to link it usefully.  In KOF 13, K’ could do this after a super, it looked mad!

Koukou has been working on punishing characters who try to attack you back! Of course, if the opponent blocks then you can keep applying pressure and look for another gap in the defense…

Here’s another of Masami Obari-sensei’s artworks for KOF15!  If only Shun Ei looked like that haha.

Some people are concerned Whip is weak. Well, she has a few interesting tools…

King is going to annoy me.  Of course

2 bar Heidern combo? Thanks Freezer, I remember why I didn’t like Bullet Hell Heidern

So, remember KOF13 long ass combos? Do you remember putting down your stick and going off for a ciggie if a good Ash player caught you? Well….  WELLLLLLLLLL NOWWWWW

InfernoKong, perhaps the only person to OCV Xiaohai, is back with his beloved Antonov, keep an eye on this player!

K2 has been playing online with Ralf, in a VERY simple way.  You might like this indeed.

Exploring the shatterstrike.  This feature is still unknown, is it just another combo extender? A reversal mechanic?  flashback_loud takes a look, frame by frame!

Amedo shows that the last display by Clark won’t actually work in a real match, sadly.

Dinosaur setup by El Rosa, this is some big brain

After 4A, delay grab for Dino to land close enough for 2B 2A 234AC to combo#kofxv pic.twitter.com/I626zVY9w1

Leona setups are coming in!

You know the three treasures right? You know Chizuru gets looked over quite a bit, but in the right hands, she literally shines… ok check out Cristina’s two clips

Yay, final got a concept of both roll cover with throw break with chizuru #kofxv_chizuru #kofxv pic.twitter.com/eLBDb7p9VW

Athena can activate raw maxmode while do combo. Thanks to her EX Psycho Shoot. Damage is too great <3#KOFXV #KOF15 pic.twitter.com/3CZttzTOPw

Now here’s something a bit nastier from vryu sensei which will probably give you psychoball-itis.

Do you like that freaky guy with the metal arm?  Then here are some tips from Dandy J!

Couple of practical Krohnen quick max combos for anchor position. You can do close 5C instead of close 5A for the 3 bar, but you have to wait to dash really close so it's kind of awkward. Side note, his far 5C gives you about 2 seconds to confirm into quick max #kofxv_krohnen pic.twitter.com/ZJGVDyTAY0

Kyo Okezemi (mix up on wake up)

Perhaps the saddest news of the day, after Clark’s bad news, his team mate follows suit.  K’ also suffers the same.  Why SNK, why?

I dunno why they changed this? ????? pic.twitter.com/6me2omoVjC

I personally don’t like these combos because they aren’t practical, but they sure are entertaining! Ash is gonna regret sending that fireball at Liz…

Liz is back again by Wauhti with a nice conversion from standing CD, that’s something to think about, as it’s 2 bars, and 40% damage!

Mai lovers will enjoy the fact that she has high juggle potential, with a few loops in there, check it out, thanks to Kawama3141

Remember the Iksan station meme? ATRyoSakazaki brings it back!

Luong OS still exists! Have you settled on a team yet? Don’t worry, it’ll take time, and there’s the fun in learning!

Here’s a couple of links to my favourite arts of the day!

Watch all Dune’s guides. All of them.

As more players get access to the game, more streams will begin.  Here is a selection of the highest skilled players.

Here’s an exhibition with top players!

Also keep an eye on Atma

And hmmm familiar faces are turning up on the scene again

I'm playing an average of 18 hours a day. It's like drugs. pic.twitter.com/QbTTSNyJCC

As suspected the Xbox has less display lag but considering the price of an XBox it’s just not feasable to run tournaments on it. Let’s see what happens with steam but so far, PS4 is gonna be the tournament platform standard.

And finally, the patch we all knew was coming…. it’s coming… but for what?

We will update when the patch is ready.
We will continue to improve the game experience for everyone. Thank you for your support.#KOFXV pic.twitter.com/2uNrIuCRts

Well, VERY LIKELY FOR THIS, so watch closely lol

That’s a wrap, my wrist hurts. Tomorrow, we’ll try to post the review and a livestream to play and explore with everyone!  ENJOY! KOF IS HERE AGAIN!!!