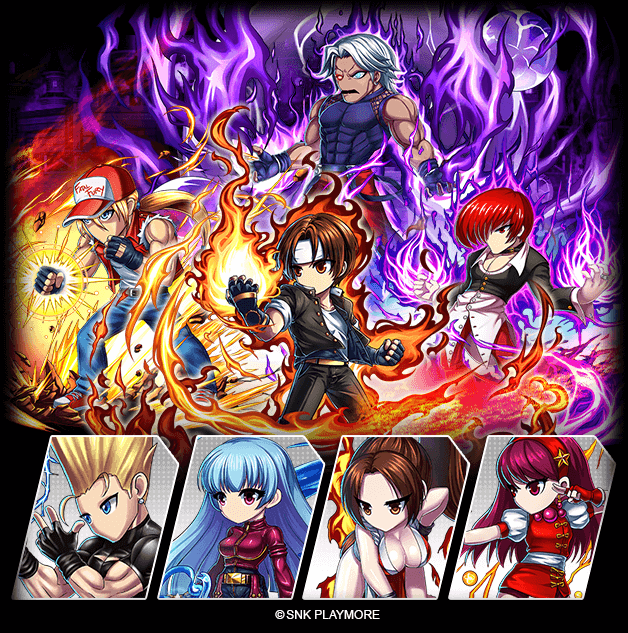 Zak: So far everyone got Kyo Kusanagi a free unit for everyone.
He’s not the best when compared to a load of other units but the bottom line is. He’s a FREE Strong ass 7star unit for the public. GG’s

Terry B is the current strongest because:

Benimaru 7* is looking really good imo
and Athena 7* looks alright/average
Idk about Iori and Rugal yet
but so far – no one looks like absolute trash that will never be used. Well unless you’re Gary because i know this guy has Godlike units all over the place lol so he probably won’t bother with em xD”

In fact Gary Lau gave his own report:

“lol godlike units and if you are talking about that 100% mitigation for 1 turn from his (Terry) UBB you do know that is actually really bad seeing how about 4 other omni 100% mitigation can last between 2-4 turns. His drop checks really bad for an omni so the only time you would use him is if you don’t have any other stat buffers in your squad. The only way you going to make him viable is take the 2 turn mitigation for his bb/sbb and ubb sp skill which cost you over 70 sp so your choice lol.”

and then the conversation continued

So i guess he’s not gonna be useful for me. But atleast they aren’t trash and unviable for the world xD

And true say – i just looked at his stuff again – that drop check …. Yikes! i rarely think about it because i usually use units like Zelnite/Feeva or UBB Nyami / or Eze / or that water lily chick for BC and BB to always be up there
(along with damage taken = BB)

Gary: As for iori and rugal i don’t really know what they are about atm but i can only do 4 summons thanks to the gems from FH which is tempting me to summon for Iori if he is viable. Iori was my favorite kof character which is taunting me to summon for him i don’t really care about terry lol. Zak you are talking about magress yeah he is still usable for a while and since zelnite and nyami going to get an omni in the future you pretty much set for a while aswell.

I hope Rugal is good – i need a villainous character like him. lol or Iori

Gary: Did 4 summons just now got the two chicks but no Iori Yagami….. 🙁

Here’s a video on trying to summon… and it really looks like people REALLY want Terry!!!