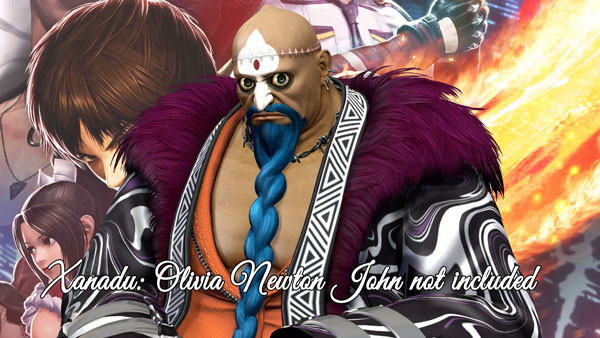 While the reaction to Xanadu was mostly positive (see below) the theme song for KOFXIV that you can hear in a lot more of its entirety in the Atlus E3 trailer below has caused people much heartache and stress, because they want to get the song as soon as possible!  What started as a cheesy sounding chorus has revealed itself as a nu-rock anthem that may well last long into the summer at least!  Check it out below!  The track is not available as yet but people really want to get it!  We have word that all will be revealed soon!

What was your reaction to Xanadu? Many thought he was the archetypal bad ass prison break leader.  Well, that might still be true, but the image he gives off from the first trailer is certainly not …. stable.  Most people have been pleasantly surprised, while some people were horrified by his ugly appearance and style.  They were a minority, however – most people saw the potential for a very fun character and especially to troll / make fun of the opponent.  The “rock a bye baby” could turn out to be the best way to insult your opponent!!!

If you’ve seen the cover for KOFXIV in EU, you may wonder what the fuss is about but certain fans don’t want this artwork and would prefer the Jpn or US cover.

If you feel this way there is a petition for the cover to be changed.  You can sign it here.

Check out our next post for all the battles from E3 and Nemo’s coverage!