So in UK time KOF will start at 11pm, that’s midnight in France. Check below for other conversions, that’s a really cool thing for the community. Thanks to Nile Dragon for sharing it.

Kick Punch Block will be streaming it:

Offer available across all spreadshirt stores (not society6). FAVSHIRT for 15% off!  Ikari Shirt v1 will be retired, as will one of the Bogard designs and a few others.

Another social network, another app, another place to talk before politics get involved and people disappear.  Well, I was asked to help promote it, so here it is. 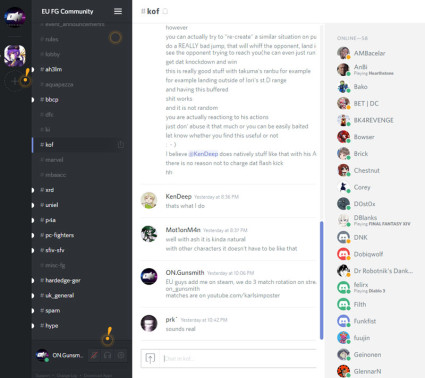 If you are tired or just don’t like facebook, watsapp, irc, etc, here’s another avenue with some fresh faces you might prefer!  It’s always cool before those horrible old people come in and spam the place with their rhetoric.

This is just a quick reveal, but the EU has set up their own place here, and who’s to say it won’t end up the same as all the other attempts, but it sure does have a nice functionality to it and as you can see, people are trying it out.

The EU FGC on Discord is a publicly listed server, but the easiest way is to use this invite link. (Thanks MechaGS!)  You can of course make your own.  VAMOS!