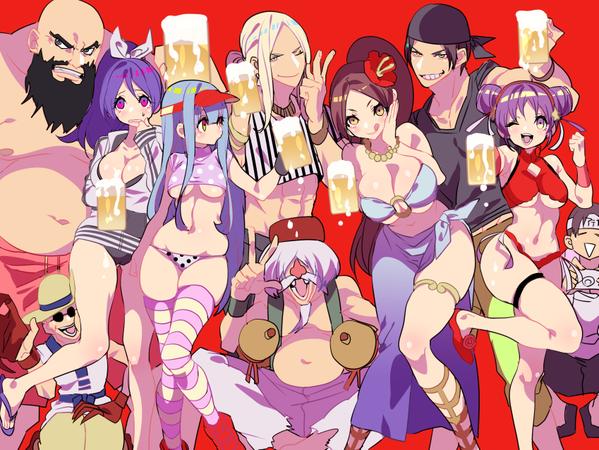 So you probably dig the artwork eh, here’s the source!

Speaking of Art, our artist Orochikem has been hard at work on some new designs, and soon you’ll see a facebook page/deviantart or something ^^. In the meantime here’s a preview!

More of his stuff can be seen in the store!

Steam is having a massive flash sale ending tomorrow. Part of that is the KOF titles, including the triple pack being reduced by up to 80%!!! $10 for all three? Oh my daze!

This latest update to “METAL SLUG DEFENSE” includes also additional battle areas and missions as well as paid login bonus items available at a very advantageous price. * Total amount of downloads of the game on iOS and Android (with the exception of China) *This number doesn’t take in account several downloads done on the same user account. Version-up overview: ?Description:?

Need some help here – which Esaka design is best?

THE ON SHOW S02E04 We’ll have the usual KOF matches and other stuff ^^ KOF and other fighting game commentary, discussion, analysis and random silliness. Want to join the show or want a shoutout? Drop a message on twitter or facebook! My xbox broke so we need a new donation drive with more gifts up for lottery! :/ Should be cheap though 🙂 https://twitter.com/orochinagicom/ https://www.facebook.com/orochinagicom PLEASE SUB! HELP US REACH 1K on youtube! https://www.youtube.com/karlsimposter https://www.youtube.com/watch?v=RGFHja1vYMc&feature=youtu.be

If you missed it while live, here’s another chance to catch up on the games in the recent Qatar tournament

available at 40% OFF during SCEE’s Digital Discount #sale until June 25th!

You can now enjoy this game without having to buy anything!

The full version is now available from Apple Store and Google Play!