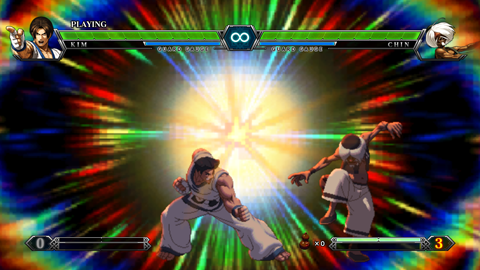 There have been a few videos about OS things but this one I think you should pay more attention to since it gives certain already strong characters another advantage.

Picture inputting crouching D cancelled into DP, with the uppercut not coming out UNLESS the sweep doesn’t hit, like when an opponent hops over it into your face. BUT instead of them hitting you, of course, they get uppercutted.

The option select itself allows you to whiff cancel moves if they don’t hit but have nothing or something else come out if they do hit. First, the reason I believe this works in the first place is because the game doesn’t accept moves during hitstop.

If you hold the button, this doesn’t really matter and they come out anyway but if you input a move during the uncancelable frames of the startup of a move that can be whiff cancelled at the start of it’s active frames then this option select can be performed. It can be performed because you let go of the button before the hitstop would normally end.

This means that any whiff cancelable move can be used with this option select. Prime examples are Karate sweep, Saiki sweep, Chin far.C, Shen sweep, pretty much any CD.

You can option select all of these moves with command normals, specials, supers, neomaxes if you feel like it. If the moves hit nothing comes out, if they don’t whatever you input comes out. However you don’t have to have it so that nothing comes out if those moves hit/are blocked.

This OS still allows you to cancel to special moves on block whilst having something else come out if it’s whiffed. A good example that comes to mind is Athena. With CD you can have command grab come out on whiff, as to catch roles or even throwable reversals, but if her CD is blocked or it does hit, she can still cancel the CD to psycho ball. In Saiki’s case you can have sweep into DP come out on whiff, but on hit or block have him throw an A fireball.

The only real way to beat this option select other than to block most times is to do the riskiest roll on the planet. If you’re midscreen, sure jumping back or backdashing will work against most variations of this option select but in the corner if say Karate is using his DP in this OS all you can really do to beat that is to block, do your own invincible move that is better, or super for that matter, or the riskiest roll you could possibly ever do. This opens up a lot of options on offence but this OS can also be used defensively to poke out. It will change the game for sure now that it’s publicly known.

Here’s the OS used in extension.