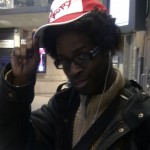 Some of you managed to guess the identity of our mystery guest.

Now let’s get down to business!

Ryan has the Orochinagi copy of KOF XIII and will soak up as much as possible before giving us an exclusive interview to tell us about his impressions of the game.  This does not in any way guarantee that he’ll like the game.  We may end up talking about Street Fighter or Tony Ja, hey I don’t know!  Perhaps it’ll be a short interview and we’ll just stream some KOF for the remainder. Being the 22nd, we’ll also have first impressions from US fans to discuss, as the game is released, ahem, properly.

If you have any questions, you can add them here, or join us on eLive.