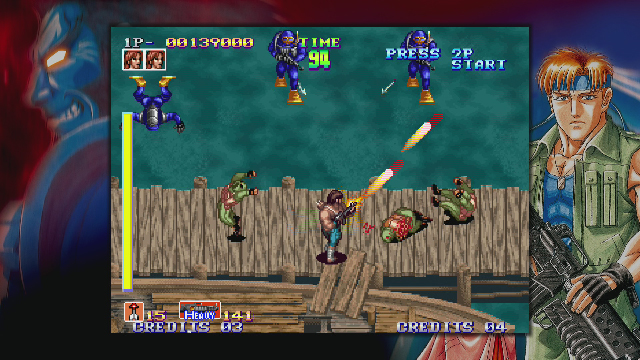 When you ask people to say what comes to mind when you put together ‘NeoGeo’ and ‘scrolling shooter’ the most probable answer will be ‘Metal Slug.’ However, SNK Playmore has seen fit to release an oft-overlooked scrolling shooter from the NeoGeo catalogue, Saurus’ 1997 top-down action game Shock Troopers, and we’re all the better for it. 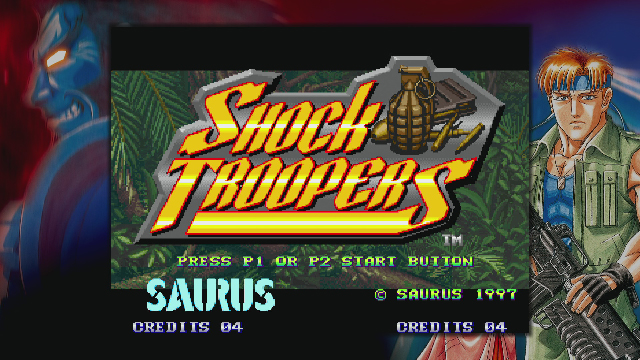 In Shock Troopers you navigate six stages in a top-down manner while collecting powerups, defeating enemy soldiers and taking out enemy tanks and aircraft along the way. The game gives you two ways to play it, either as a solo operative with three lives per continue (much in the vein of Metal Slug) or as a squad of three mercenaries whom you can switch between at the press of a button (a la more recent games like Trine and Castlevania: Dawn of Sorrow). Unlike Metal Slug, however, the action takes place from a top-down perspective, and enemies will come at you from all sides, and sometimes even from above you, so you need to stay on your toes, especially in later stages when projectiles will be flying at you from multiple directions.

Fortunately, the game does give you some great tools to help you deal with this onslaught. In addition to your using standard weapon attack that you can fire in eight directions, you can hold down the attack buttons to allow you to strafe while firing in a single direction. There’s also a combat roll you can do which will avoid enemy attacks for a given window, and a special attack that varies depending on the character you picked. There’s also a context-sensitive melee attack that you can pull out if the situation calls for it, and taking the risk to use it will result in the enemies dropping bonus items. Unlike Metal Slug, however, your character has a lifebar, meaning you can take multiple hits before losing a life. This doesn’t really make the game easier, though, since the game very much takes full advantage of the fact that you can move in all four directions and generally throws a lot more fire at you from the get-go.

Enemies will attack from all directions, so look out

As far as weapons go, the game starts off all the characters with a standard rapid fire machine gun with unlimited ammo, and you can pick up new weapons from crates and other pickups along the way. Most of the weapons are your standard fare heavy machine gun, gatling gun and the like, but there are a few more interesting weapons like the flame thrower (challenging to use because of its short range) and super weapons that have small ammo reserves but will seriously punch a hole in the opposition. There are also powerups that you can pick up from fallen enemies that will grant you abilities like invulnerability to damage or a faster walk speed for a short duration, but there are relatively rare. Finally, there are health pickups, which are dropped by fallen enemies and are also secret items on most stages. None of the weapons feel particularly overpowered (although the flamethrower feels a tad underpowered because of how easy it is to miss with the thing) and the health pickups are rare and small enough to not imbalance the difficulty of the game.

That said, one of the other interesting aspects of the game is the approach to stage selection. Various Metal Slug games had segments where the levels often branched off into two different segments, but Shock Troopers kicks this up a notch or three by letting you pick from three different sets of stages (mountain, jungle and valley). After beating two stages in that set you’re given the option to switch to a different set of stages. This gives you tremendous incentive to play the game again, even if you’ve managed to 1CC (one credit clear) the game, just so you can try out the different combinations and play through all the stages. 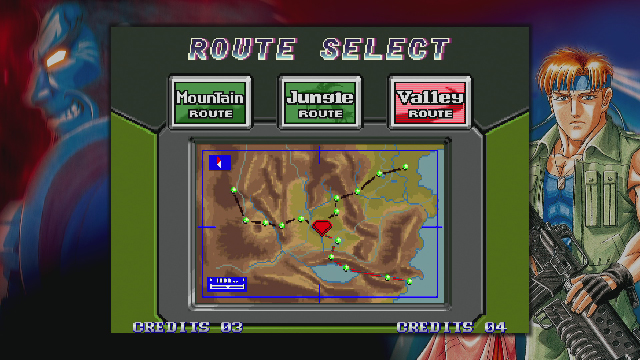 And what great stages they are. They run the gamut from simple scrolling stages where you walk around an open 2D field to areas where you’re on a moving platform that you need to defend from encroaching enemies. Other segments are also creatively constructed to limit your mobility in different ways, and the enemy rollouts also change accordingly. For instance, one section has you fighting off enemy soldiers while scaling a cliff, with the limitation that you can’t fire your weapon while moving. Another section has you fighting airborne enemies while navigating a zipline and so on. It feels like the developers took some cues from games like Contra and its sequels here, and it never gets boring.

All of this action is presented with some really great background/stage artwork and some really great sprites. The stages are interleaved with some lightly-voice acted manga-style stills, and the game itself takes a similar approach to art direction, albeit with a superdeformed look. The sprites are large for a game of this type and are decently-animated, and while the level of animation on the bosses doesn’t approach, say, the intricacy of Metal Slug’s characters (let alone its hulking boss machines), it still looks good in motion. There are even nice little touches like your character’s idle animation looking strained as his health nears zero, and enemies writhing around on the floor before finally expiring. The sound work is also top-notch, with some rocking background tracks backing up the action, some even featuring vocal samples. If I had one complaint it’d be that the enemy sound effects can get a little repetitive but that’s easily ignored since the rest of the game is so solid.

Overall, if you’re trying to decide which NeoGeo Station games to pick up, Shock Troopers should really be on your shortlist. It’s challenging and action-packed, and you won’t get bored of it in a hurry.