Yes Bayonetta, I want to touch you.

Yes Bayonetta, I want to touch you. 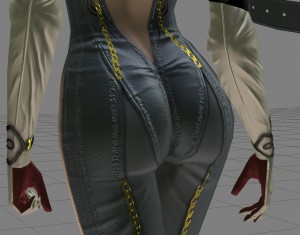 I woke up Tuesday the 5th excited. A game by the name of Bayonetta was scheduled to be released throughout the States, and I was ready and waiting to blow money on a copy of it.

On my lunch break, I headed directly to the nearest Gamestop, ignored the idle chitter chatter about signing up for extra ballyhoo, and finished the rest of the day fantasizing about my gaming experience involving what has been described as an uber sexual ‘bullet witch’.

I popped the game into the PS3 and waited for the game to load and eventually start. From the beginning I knew this game was over the top as the lead character grabbed a demon-like ‘angel’ by the legs, spun it around, and hurled it into a group of his buddies.

After the beginning cut scene, I got a chance to jump into the fray. I only played Devil May Cry once, and never got into it, but enjoyed the game play and sense of style. Bayonetta gave me the same feeling as I got into an all-out brawl in a graveyard with said angels. The system is easy to learn, but deceptively deep. I was racking up decent combos with ease after the first hour of play. You get three attack buttons and a jump button, which gives you a good deal of options on how to tackle the baddies. You also get a dodge button, which triggers Witch Time. Witch Time leaves your enemy suspended in time while Bayonetta gains a speed boost to take advantage of your opponent, who seems to be trapped in a delicious space-time molasses.

One of the wild attacks you'll come across in the world of Bayonetta.

Also, there is a taunt button that you can use to provoke the angels (which should honestly be able to turn the other cheek. They’re angels. Where’s the restraint?) into attacking you if they are shuffling about aimlessly. The game rewards your combos with the ability to pull of Torture Moves, which are in essence finishing moves. You also pull a Mega Man in these cases, as you can use the weapon of the now eradicated angel. You can even commandeer a tuba to cause terror with. Enough said.

You also get accessories to imbue our heroine with otherworldly powers, different weapons, and an item system where you can make your healing/attack/defense items by mixing ingredients that you can find by wopping angels and breaking things that you shouldn’t like random vases and benches. The boss fights are fast paced and of an epic scale, although I jumped around and punched and kicked until the boss’s energy responded in kind by slowly chipping down. You’ll feel pretty sexy when you beat a boss. They are always an intense and satisfying battle (when you win anyway. I’ve seen the continue screen enough).

I won’t get into the story much, as I am still going through it myself. To me, it’s a tad silly. But the game doesn’t take itself too seriously to begin with anyway. There is a good deal of homage to Sega and the other games that Hideki Kamiya (the lead designer) and Platinum Games worked on..I even noticed some stuff from Okami that made me smile.

The graphics are worthy of praise they’ve been receiving and the stage designs are gorgeous. You spend your time shooting through a fictional city in Europe under the shadows of lush European architecture. The music is also a good treat, as it fits the game perfectly. Outside of Bayonetta herself, the character designs are good. The voice acting is base, but it’s not completely ear-murdering.

I’ve heard about all the gripes of the PS3 version over the Xbox 360 one, but all the load times and slowdown are not an issue with me. But then again, I am a rather patient person. I’m also not hard to please either. But I can understand why people will go with the smoother running Xbox 360 version if they have both systems. But you’re not at a loss if you get the PS3 version.

My only gripe is with some of the Quick Time Events that end up killing me on sight. I’m watching what I think it a cut scene, and I get a prompt to hit square or circle, and I miss it. Then I have to continue. Unhappiness. In my quest for Platinum medals for the in-game battles, that’s a thorn in my side. Other than that, I have no gripes.

I am overall pleased with this game, and would recommend it to anyone that enjoyed Devil May Cry and looking forward to God of War. It is over the top, frenzied, and funny in a sexy way. Or sexy in a funny way. In either case, I can’t stop playing it, and can see myself playing through it several times. Even if the reason is just to pull off some combos like the ones I see in those videos people upload to Youtube. Do yourself a favor and watch some of them.

Bayonetta gets the Shiny Seal Of Approval hands down. Rent it, buy it, borrow it..however you get a hold of it, play it.