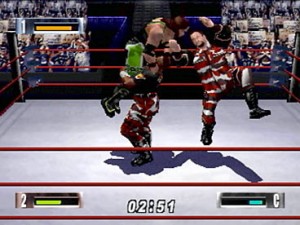 N64 No Mercy is still the best wrestling game ever, like KOF 98 is the best KOF.

When people that say things like this, you have to ask: Have you actually played the other wrestling/KOF games?? If they haven’t or make some evasive answer or say something like “yeah, I didn’t like them” then walk away.

I have played the other KOF games.? All of them.? I also have played pretty much all the wrestling games.? TNA’s Impact, Fire Pro Wrestling, SVR, King of Coliseum… the list can go on.? Along with most self proclaimed officiandos of the genre, I firmly believe Studio Aki’s No Mercy for the N64 is the best wrestling game of all time.

However there comes a problem with legendary games.? They get old.? Wrestling has moved on.? New characters, new moves.? Aha, you say, they’ve hacked and reprogrammed No Mercy, so it’s up to date!? I’ve played this.? It’s got HD graphics, it’s got TLC, the F5 and FU.? It’s also damn quirky and prone to glitches and crashing.? Nnggg.? Not happy.

Not being a stick in the mud, I occasionally have a look and see how SVR is doing, with their year in year out revision, and the screaming and bitching by the fans with the immortal comparison to No Mercy.? Check the gamefaqs reviews if you don’t believe me.? No Mercy is the benchmark. 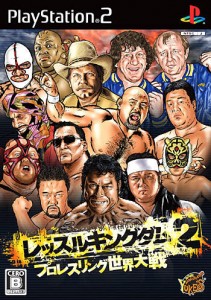 My friend picked up SVR2010 cheap, partly because he was tired of grinding on Borderlands and wanted to try something different.? I popped round, having got some new mods for No Mercy, but gave SVR a little try.

It’s got a new system.? None of this rythm rubbish, or spamming counter, or heel or face meter… it’s a strangely basic weak and strong grapple system, not unlike No Mercy.? However, using the right analogue pad, you have access to four sets of moves.? Each set has four moves.? So that’s like… 16 moves, from a front grapple.? That’s a whole load of powerbombs at your disposal.? The counter button is one button, which counters both grapples and strikes which is a little… meh, as then there is no guessing game, just a requirement of timing.? You also get a pop up to tell you when to press it.? Games these days…

Still, the grapple system is good.? When you grapple, you can switch from set to set, and you see this in a variety of clinches, which makes the wrestling look like… well, wrestling!? This leads me to talk about the graphics, and frankly it’s quite hard to look at No Mercy after this.? The wrestlers grit their teeth, squint in pain, widen their eyes… holy crap, it’s amazing!

Go read other review for more details, the killing point is that with the online features, No Mercy becomes defunct.? You can create your wrestlers, videos, music, and most importantly, moves, then share them online.? This is insane.? Let’s not forget DLC, which means if you bitch hard enough, you’ll get whatever you want to be added to the game (reasonably). 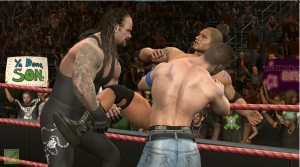 A slight step up from No Mercy graphics

The only thing I didn’t like is that sometimes it’s hard to set up running finishers, and I can’t seem to pick up a wrestler and turn them around.? In tag matches, I’ll still accidentally grab my tag partner, even though normally that’s impossible.? TKO is unstoppable, which can end a match before you’ve really got warmed up.? Oh, so that’s a few things I didn’t like.? Hmmm.

When you really whittle it down, No Mercy’s system is still better.? I could set up a wrestler to do any move in practically any situation.? SVR has billions of moves, yes, but no point if you can’t execute them when you want.? SVR’s system seems the next best thing.? I think the opportunities for executing your favourite routine can be a little difficult, but arguably you’ll just have to be a better wrestler (i.e. showman). 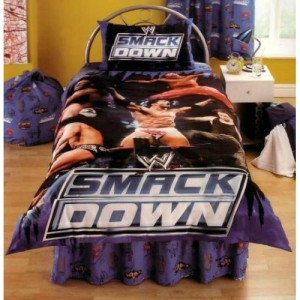 SVR on the next gen platforms is really a sight to behold.? Going online literally opens up a world of opportunites.? We all want new moves, and those new characters.? No Mercy can beat SVR in every other category (if only just) but it’s this ever expanding feature that has made me go out a buy a copy, putting my N64 in a box, only to be played at Christmas for a bit of nostalgia.? And let’s face it, those hack job move mods are crappy. ? You have got to see Shawn Michael’s face all blooded up and in pain, it’s soooo satisfying.