EVO 2010. If you’re a member of SRK, vote for XII to be the 7th game in the tournament line up. It’s not going to win, of course – 3s or MVC will win, but that’s not the point. Show SRK that KOF fans still exist. Remember that SRK did try to work with Ignition when they noticed the hype over XII i.e. take over the tournaments! SRK knows what’s up…

It’s been a disappointing year for western SNK fans.? However, it’s not all sour with XII being featured in the line up for Devastation 2010, so those skills you learnt won’t be wasted.
http://www.devastationevent.com/

SVB20-x has been announced: as you know, I was present at SVB09, holding interviews and provided guest commentary for matches, exclusively for the DVD.? I had an awesome time getting to meet the UK fighting communit, and this year’s looking to be even more insane! 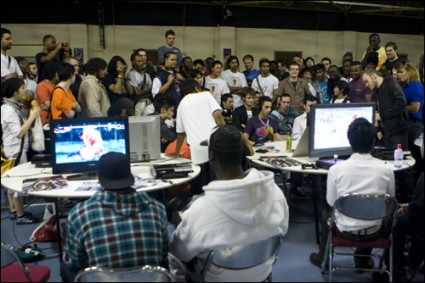 The XII Money Match will always be a highlight of SVB09

This year’s line up has KOF XII, Blazblue and Guilty Gear Accent Core along with the obvious.

The question is, will ye olde Gunsmith be back for SVB20-X?? Hmmm… will you?