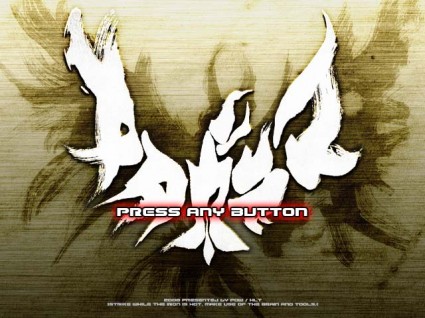 How many legs, exactly?

If you’re a regular from Madman’s Cafe or Neo-arcadia, this is not new news, however, SFU3540 has recently added a new video, which features new characters Shimo and Hina.? Read on for more pics and video.

Yatagarasu is not an unfamiliar icon to those who know KOF and Japanese mythology but exactly what it means is still a bit fuzzy.? So far, all I can tell you is that Yatagarasu is a divine three legged crow.

Now let’s talk about the game.? Backgrounds suggest post apocalypse and the samples (we have no time to lose/ you will not interfere!) suggest a rebellion of some sort.? Characters are quite subdued, both in appearance and in colour, evoking a sense of bitterness and crude strength; crude being the best word to describe a lot of things, at this stage of development.? It may be simply that only one guy is programming this, or its the limitations of what he knows about programming, but the system looks… limited.

The speed of the game seems to be at an SF pace with 3s hop moves rather than actual hops.? The moves look… uninspired.? Dragon Punches, fireballs, sword slashes, Fei Long chains… hmmm.? The grab moves don’t deliver impact, both aesthetically and physically.? However, Hanzo is still a hot character design, regardless of the unoriginal name. 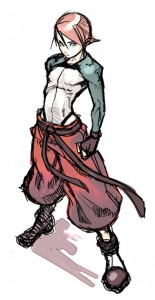 In these days of Blazblue, Vanguard Princess and even KOF XII, we really need a bit of graphical hot sauce if we’re essentially going to be fed the same potato diet of punch kick block.? Saying that, I did see some sort of parry, EX move and cancel.? Again, so what.? Early days, early days, of course, it’s only a demo!? I just hope that these are only the basic features and there’s going to be something else that makes this game stand out from the rest.? Badoor (mmcafe forums) noted that Hanzo has a different sprite when she turns around.? This is nice, hope to see more attention detail like that.

Music is decent, a blend of fast beats with synth piano tones with a touch of rock guitar.? Other tracks made me think of emo rock, light techno and some middle eastern folk?? I dunno, but I liek so far.? Voice acting is standard (i.e. good).? The announcer is freaking out lol or there’s some sort of feature where you can scream pre-recorded insults at your opponent, which would be tres cool.

Forum posters say that Styleos is the programmer (if not one of the team), the same one that worked for SNK from 99 – 01 (Check links below – if you can read Japanese).? So?? Tamayak (Our forums) suggested this game was being created using Enterbrain’s 2D fighter maker 2k2. Ah…

If you look around on youtube, you will notice some similarities, not to mention some pretty cool games.? Unfortunately this game is no longer for sale and of course is in Japanese only.? The really scary part is that most of these games never actually get finished.? Let’s hope Styleos and the team can keep up the tremendous work and make something special!

Sources and other links to check: