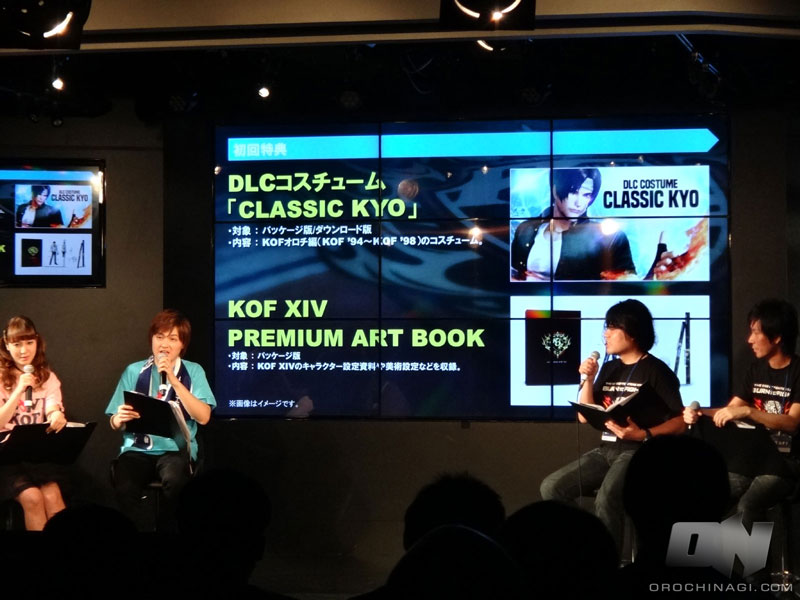 I’m afraid I won’t be able to get time off work to go and interview Oda.  Perhaps it’s lucky for him as I found a loooong list of questions that we had compiled.  Still, Oda will be at Japan Expo this weekend so we will all get a chance to say hello!

Just out of interest, here’s the question list from everyone.  There’s no way it could fit into a 15 minute slot lol.  Still, some are very interesting, and some, I think have been answered now.  Which 5 would be the most important now?  I’m lost already looking through it.  I’m definitely not taking any more for the moment.

From the Japanese Community:

(English) We understand that the next KOF and Samurai Shodown will be in 3D graphics. If you guys decide to bring back some of the other fighting game series (like Fatal Fury, Art of Fighting or Savage Reign/Kizuna Encounter for example), would it also be rendered in 3D graphics?

(English) You guys are developing the next KOF in 3D, but are there any chances in the future that a KOF will ever get developed in 2D again? It’s a little sad to think that we’ll never get to see SNKPlaymore’s high-quality 2D and pixel art again. Of course I’m looking forward to the new KOF, but it’d be great if you guys can continue to develop games in 2D as well. Thank you guys for giving us an opportunity to ask questions like this. Even if the interview doesn’t work out, it’s great that there’s still the chance to do so.

(English) Since you guys are making the next KOF in 3D, are there any chances that you guys will work together with Capcom again, considering they’re also making games in 3D too? It’d be awesome if you guys can do another project like the CVS or SVC series.

From the EU/US Community:

Does SNK plan to bring more titles to Steam?

What about original titles?

Will we see titles such as MOBA coming to the West?

Will we see original titles for mobile?

How does a company benefit from a free to play application?

How many downloads does Metal Slug Defense have now?

Due to the success of MSD, will SNK concentrate more on mobile apps?

Does that mean less fighting games on consoles/pc?

How did the pricing change affect ROF’s “downloads”?

SNK seems to put a lot of resources into their pachinko titles, will this continue?

What are the company’s most popular products right now?

Which of these markets look interesting to SNK right now? Pachinko/Mobile/Console/Arcade/PC/Toys/Anime – is there anything else?

We understand production of arcade units, especially with patching, is prohibitively expensive. With other companies slowly withdrawing from the arcade sector, what is SNK’s position? (continue to support or not?)

What do you think about Nesica live – is it a blessing or a curse for the arcade industry?

We’ve seen many cross-overs in other types of games such as Lord of Vermillion, are there any more you can tell us about?

Are there any plans for a Crystalis sequel or reboot and if so will there be any KoF Characters involved?

Are there any cross-over titles coming that we might be able to play?

Will there be more games for PSN NeoGeo Station?

When are we getting a new SAMURAI SHODOWN??
We saw the advertisement for developers for a new KOF and SS title. But we’d like to hear it directly from the company – it’s the big question on everyone’s lips: is there a new KOF in production? Is it Maximum Impact or KOF XIV?
What will the graphics be like (3D, 2.5D)?

What made SNK decide to use 3D when Maximum Impact was discontinued?

Some people say Maximum Impact was a failure but others say it sold very well in the states, can you confirm this?

Which platform will it be developed for?
Will there be a new storyline for 14?

Is Athena going to… you know…. go on a diet?

Will we have a dream match?

Will there be a crossover guest team in next KOF?

Which characters would YOU like to see back this new title?

Have you thought about adding the Rage of the Dragon roster to KoF?

Are there any plans for Garou 2, CVS3, SVC2 or even another Metal Slug?

Will you develop new games from now on PS4 / XB1?

Will you re-release older titles on new platforms such as PS4 and Steam?

There used to be lots of SNK merchandise such as pens, tshirts, key holders – is there a possibility of merchandise that overseas fans can purchase?

So kof has hit 20 years, what is SNK hoping to achieve or strive to do to make kof successful next few years?

Are they developing kof games now so it caters to tournaments and the like? (

Will we ever see fan favorite characters like Oswald or MI characters make it in future kof games?

Will we see any more complex characters like Angel / Juhn/ May Lee or do you think games are more popular with simple controls and movesets?

What do you think of games with the auto combo function?

Will there be beta test periods in future steam titles from SNK, like we had for like for XIII? We enjoyed giving feedback and helping the company.

Will fighting game netplay developers ever fix side advantage?

Will 98FE and 2k2UM on steam have netplay? We’ve seen classic games being released without online functionality so we are a bit worried.

Will the 2002UM version for Steam be based on the Tougeki version?

Three people have asked about KOFXI. That’s not a lot, but it’s still a reflection of the total fanbase – which older KOF would YOU like to bring to Steam or Console?

We heard Kukino-san is back with the company, is he working on the new KOF?

why did snkp remove the feature of Changing BGM before the start of the match from kof13 1.1 to kof13 Climax?

Are the days of NeoGeo DJ Stations/Drama CDs over or are there any plans to release new material?

Could we look forward to KOF end of year events in the future?

Any chances of releasing remastered versions of NGPC games (a couple of extra colors) or a joypad based on its clicky stick?

Can we ever expect translations/rereleases of older console games like FFRB Dominated Mind, Koidelka, or FF Wild Ambition?

Will there ever be a non-NeoGeo version of SS5 Special? It’s respected, but mostly unavailable to fans and the curious…

What does SNK think of the F2P (Free to play) model? What do you think of the idea of levelling up fighting game characters.

SNK-only NGPC-style Card Fighters game lfor mobile would make sense, can we expect it? Sega would be a fine crossover partner

The new Athena Asamiya game is confusing – is it 1, or 2 Athenas (“princess” and Asamiya)?

If Beast Busters is returning, what are the odds of something like Top Hunter, Crystalis or Road’s Edge?

I found during EVO that Woo works for SNKP yet competed in KoF XIII at EVO2013- did the company know he was going? Did he pay for his own flight? Why didn’t he represent the company?

What makes a game more likely to be ported to Steam?

How would you classify world sales for kof13/other-kofs around the globe? (country with most people buying/playing)

Why are they so secret? We dont hear from them for so long and it makes us so sad 🙁 More SNK doing PR would be great.

Does SNK have community managers? It would be nice to see a face and be able to talk!

Has KOFXIII support stopped? Could it be possible to make further changes to the netcode or expand on netplay tools?

My question is, The new KOF will be use Unreal Engine?

Can SNKP will do something for the competitive KOFXIII scene? I mean support tournaments outside of Asia like EVO.

Will we ever see Buriki One characters in KoF?

What can you tell us about the departure of Akihiko Ureshino from writing duties on KoF after 20 years and how the story is to be handled for XIV and beyond?”
Just ask him frankly about netcode: rollback or no?
We will have an Glacial or Ice-Theme Stage?
Are we (the fans) going to see a good amount of SNK/NeoGeo related cameos, e.i. the background or/and the cinematics…ect?
1 – PS3 controllers will be fully compatible with KOF XIV?
2 – They have plans to balance changes?(I think Clark and some others will become “very bottom tier” and will need a buff or two in order to become competitive).
3 – Why they take away tools from some characters that are not top tier in the previous version (some are even mid/low) and give more tools to Iori, a well known top character in KOF XIII?
Is there a way to disable Rush Combos in the options?
Ask him will they consider a Steam ver. of KOF XIV in future.
Can you add a button check option? That will make tournaments easier.
After the release of KOF XIV, will there be any chance of DLC characters down the line?
Will you do an online beta test (Before release) with feedback support & questionare?
Is there a Custom Colors, like KOF XIII?
If KOF XIV does well will you make a sequel with KOF XIV’s graphics or completely new graphics?
Are the boss characters balanced for competitive play, will they be usable in tournament or are they overpowered.
Is there a plan for a PSN demo?
Also, are special intros are actually going to happen?
(Just in case,if the “Special intro pic” turns out to be a time running out)
I don’t think they’ll answer more than what was already said about the netcode. It would be nice to know about the support of the game. But I’ll ask about the small things:
1 – Does the game have taunts? They are missing on the 36 character build and even XIII had some sort of improvised taunts.
2 – The game only has one winpose per character? I’m just curious.
3 – The game really has only 4 colors per character? Is SNK going to sell additional colors as DLC like ArcSys games? That would be a complete 180º from having Color Edit in the previous game (already disconfirmed by Atlus).
4 – How the rematch options will work on the VS and Online versus mode? After SFV, it seems relevant.
5 – Is there a song select or it is really tied to the stage?
-SNK has been very public recently about wanting to make new games. Natural question that we are dying to know: exactly what is this next game they’re thinking of making? Please give us 3 or 4 names to hold us fans over.
-We want a cross-over game with SNK badly. Prefer Capcom but any company willing to do a cross-over with SNK is fine.
-Will there be 25th anniversary games/events for Art of Fighting and Samurai Showdown in 2017? If not, how about holding official tournaments to gauge and generate interest in these titles?

And if you got that far, I have a question FOR YOU.

I had another crazy idea. I would like to create an Orochinagi mascot. Her name is ON-chan and she’s a super fan of KOF. She wears a mix of clothing from KOF characters. The question is, which items should she wear? A glove from K’ seems obvious kekeke! What else?