The playstation blog has just posted news (via Adam Laatz) about Metal Slug coming to PS4/PS3/Vita, which you already know.

What is interesting is they have put up a poll to find out what the general public would like to see come to Neogeo Station next.

Here are the current results: 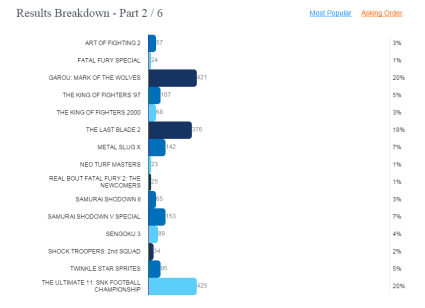 You’ll notice some titles are missing, I wonder why that is ^^ GO VOTE!

SNK will also be at the PS Experience in Las Vegas at Booth (I-9) where you can test out both PS4 & PS Vita versions of METAL SLUG 3!

Having trouble with the new missions?

Here’s ON Dark Chaotix coming through!

As you may have saw on twitter today, SNK are giving away KOF2012A on Android to celebrate KOF’s 20th Anniversary, perhaps for the last time this year!

This is not a demo.

This is, so far, only available on Android.

ON.Vicio, TSS Atma, LDA Romance, AS Reynald and Misterio will be fighting for the gold!

Line Up; Kick Punch Block and more will be on hand to stream!