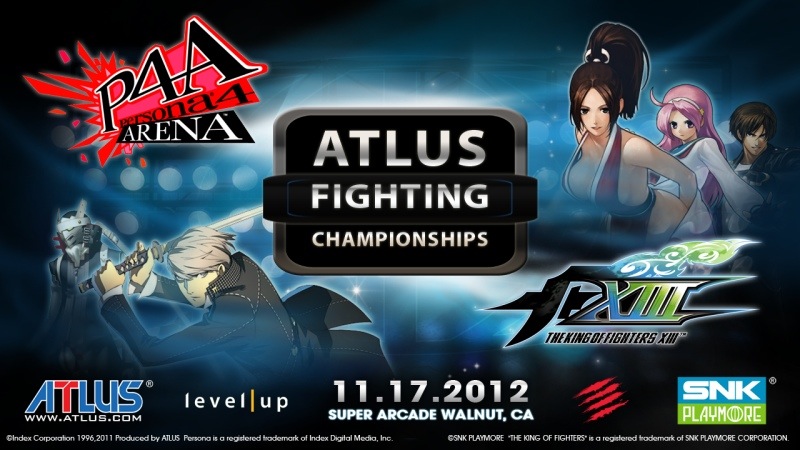 In a nutshell: the Atlus Fighting Championships.

It’s a KOF and P4A tournament in Walnut California.

Level|Up is teaming up with ATLUS and Mad Catz to host a new and exciting event for the fighting game community! Introducing the ‘ATLUS Fighting Championships’, a double header tournament featuring 2 of the hottest fighting game titles: The King of Fighters XIII and Persona 4 Arena!

This November 17, we invite you to a fun-filled event with plenty of competition, hype, and community support at Super Arcade in Walnut, California! There will be amazing prizes courtesy of ATLUS and Mad Catz given away throughout the day for lucky attendees, winners of the event, and viewers at home! Grand prize winners will be awarded unique prizes and crowned king of the ATLUS Fighting Game Championships!

Both games will be available throughout the day

This is a ‘Bring Your Own Controller’ BYOC

The King of Fighters XIII:

The King of Fighters XIII will take place on the PlayStation 3(PS3) console.

Time will be set to 60 seconds.

A match consists of 2/3 rounds.

2 out of 3 games for preliminaries, losers, and winners finals.

3 out of 5 games for grand finals.

After a game has concluded, winner must stick with the same characters for the next game.

Billy Kane, Saiki, and all other DLC chars allowed.

No game breaking exploits, bugs, or anything that causes the system to crash

2 out of 3 games for preliminaries, losers, and winners finals.

3 out of 5 games for grand finals.