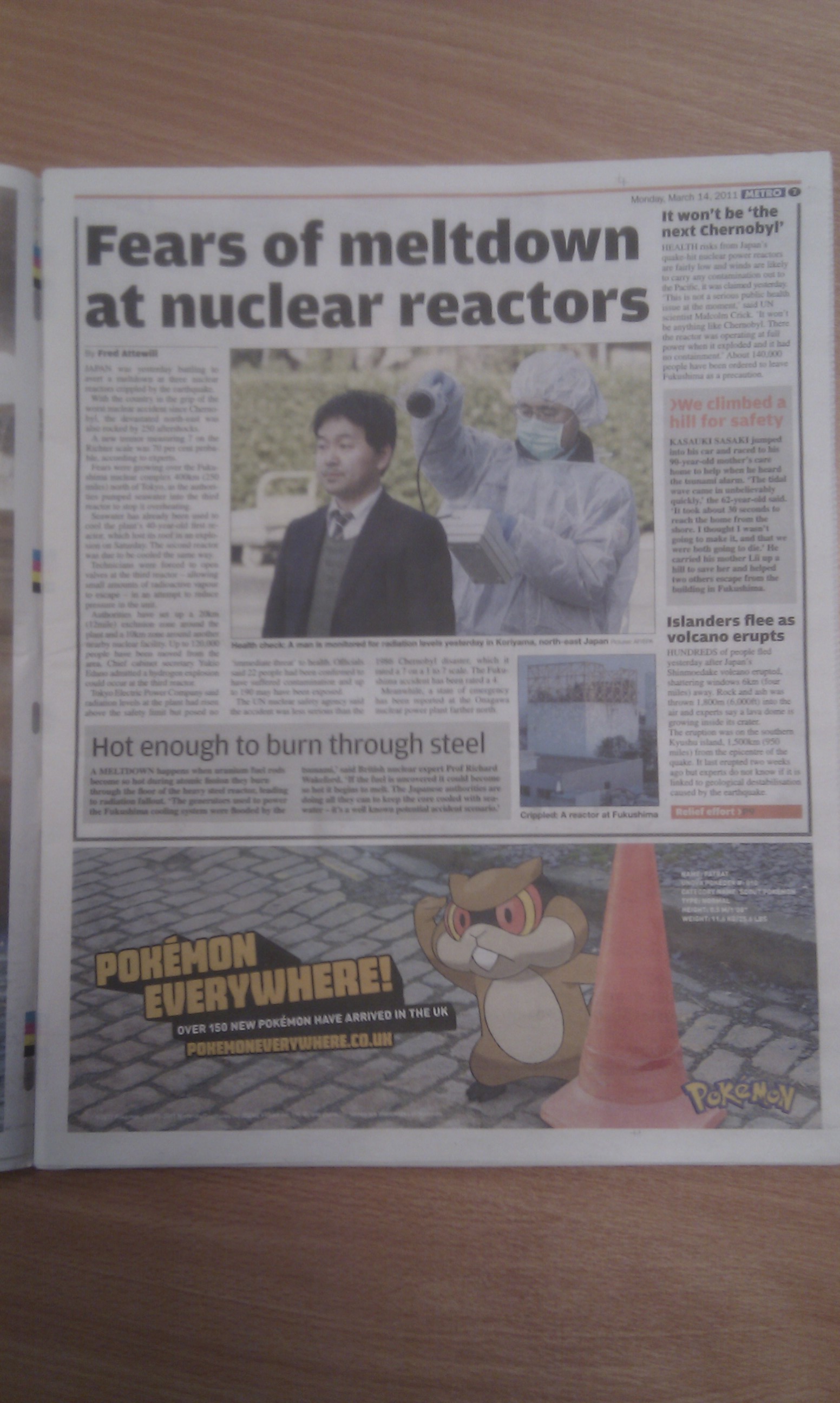 The following is a ramble, pure conjecture, nothing here is concrete or reliable.  That means you can’t use this as evidence when you run up and beg the prime minister to be let into the nuclear bunker…

“Get Hype!”… I don’t know where this phrase came from but it seems to be quite relevant. Japan was recently hit by a powerful earthquake, which caused a tsunami which flooded the coast. Horrific stuff, but does it mean that the whole country is in a panic? This UK paper would seem to suggest so… The first 6 pages covered the disaster, not including page 2 being the weather report, and page 4 being a full page Pokemon advert….

The question is… what’s the purpose? One of our friends in Tokyo notes how everything is pretty much fine, even with the looming threat of radiation fall out.

Let’s look some possible motives and thus reasons for action (or inaction):

Japanese Government – Keep things quiet, don’t send people into a panic, carry on as normal, otherwise economy is threatened. Tourism is under a big threat right now. Why tell the truth?

Foreign (Powerful) Governments – Oh noes, your nuclear container is faulty, better replace it with ours. Your country is under threat, let us take care of it for you (for a price). Scary news of foreign lands also keeps citizens from leaving home, securing their economy. Japan is quite a threat in this regard 😀  One of my colleagues was hoping that it would scare all the gajin out of the country and make his job prospects better!

Media in general: Disasters make good reading > good sales.  So exaggerate the disaster as much as possible….

If you read closely, the papers are using lots of words such as “threat”, “crisis” and “likely” and “perhaps” and “gone over the limit”, rather than actual sentences such as “radiation has leaked and we’re all going to die”. It’s hard to gauge what has actually happened apart from a small(?) leak. “Big crisis” in this case actually means “Dangerous stuff is being fixed”.

The most worrying thing out of all of this is that the French embassy has advised citizens to move away from Tokyo for a few days “in case of a radiation cloud”… in my opinion, it just seems a case of too many ifs and maybes…

Much like the fairly recent threat of a UK gas attack where all the gas masks sold out, Kelp (contains iodine to protect against radiation) is already nigh impossible to get hold of, even on ebay.  NHS direct (UK health service) is already rolling its eyes at the beginning of an increasing list of questions by panicked British tourists preparing to go (or not) to their favourite eastern destination.

I have a flight to Tokyo in April… I er…. have good faith in Japan’s ability to deal will a nuclear reactor. I don’t think I’ll be changing my plans. Threats need to become reality before that happens.  Let’s hope all the threats are hollow…

I officially threaten to empty Japan of its stock of XIII chibi figures, but that’s another story.