The SNK WCS: Everything you need to know

Home  >>  The SNK WCS: Everything you need to know

The 2019 SNK WCS have now been announced.

They have a schedule and information site here

There is no application form, as it appears SNK has chosen 16 spots across the world.  However tournament organisers should enquire via the eSports page, as then they could be considered if there is a change or even for the next one, should there be one.

This page will be updated with community information.

There is always some upset over the choice of qualifying spots, but have a listen to this video about preparation and this one about spots to get a better idea of what’s going on.

Some players still have questions about this event, so all the information has been collected and will be updated, feel free to ask questions and check back!

The SNK World Championships are almost upon us!

They will be held in Tokyo on February 18th, 2017 (Sat.), where 16 players will come together, having won a regional or national qualifier (some of these being very big tournaments!) Some will have been invited.

Many imagined the finals would be held during another tournament such as EVO, but SNK has made a big effort to hold a dedicated event where nothing else can interfere!   All expenses are paid by SNK!

It was originally going to be a two part event with the finals in China but now it has been merged into one super event in Tokyo. 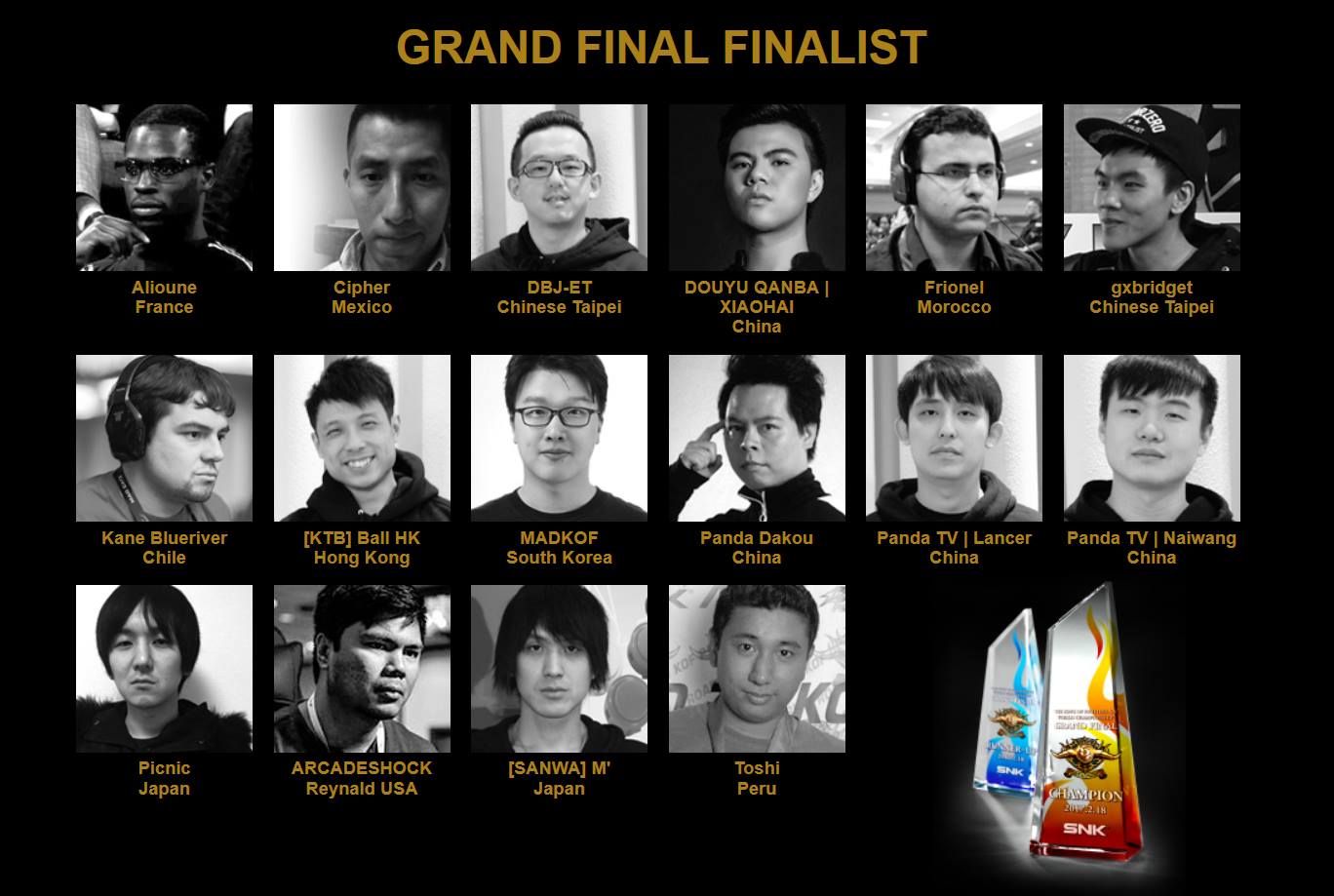 Why wasn’t there a qualifier in my area?  As far as can be seen, the local publisher has some hand in it, Atlus is in charge of the US regions and has supported four qualifiers, as far as can be seen.  Deep Silver is responsible for the EU region, feel free to question them. At any rate, there are no events coming up that would be in time for the World Championships so it seems now SNK will invite players to fill the roster.

Why isn’t Bala in this list? The news didn’t spread fast enough. The organisers of the event seem to be Electronic Game Mexico, and just didn’t manage to successfully connect with the fgc, in fact, the rules and information were only posted 21st Sep, nine days before the tournament on 30th Sep!  It seems quite obvious nobody had time to plan a trip there. For those that lived in the same city of course, it wasn’t a problem. At any rate, Cypher went and won.

If a qualified player wins a qualifier, what happens?  The qualified status is passed to the next player who hasn’t qualified.

Can spectators attend the event?  The event is now invite only – but if you visited from overseas, you will be allowed in.

Gifts will be given out too!

Will it be streamed?

?Live stream:  the tournament will be streamed in multiple languages via SNK’s official Twitch channel and others (see below)!

There were qualifiers and tournaments full of hype and fun. Find out if there is one near you here.

And now for some KOF cosplay!

?THE KING OF FIGHTERS?
Ángel