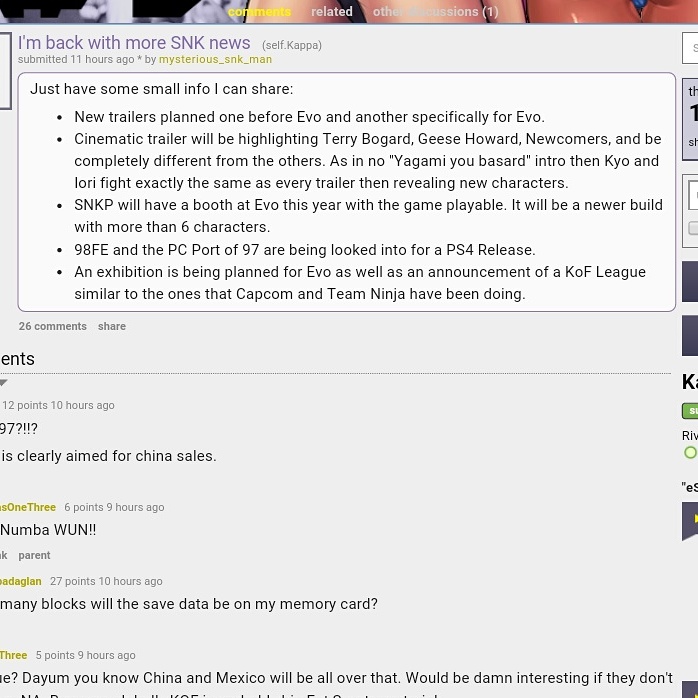 Quite a while ago, the mysterious SNK Man on kappa posted that SNK would reveal a new game at Tokyo Game Show.

Then strangely (and we’re still trying to figure out what was happening) it seemed he couldn’t tell the difference between in game footage, pachinko and qq spin off cg movies. More on this later but the fact remains the info on TGS was good, EDIT: Well, more or less good.  Professor chipped in to mention that SNK didn’t actually show anything at the actual TGS, but rather at Sony’s pre-conference show. Whether you think this makes the difference is your call!

So, he has just resurfaced, and posted this:

“Just have some small info I can share:
New trailers planned one before Evo and another specifically for Evo.
Cinematic trailer will be highlighting Terry Bogard, Geese Howard, Newcomers, and be completely different from the others. As in no “Yagami you basard” intro then Kyo and Iori fight exactly the same as every trailer then revealing new characters.
SNKP will have a booth at Evo this year with the game playable. It will be a newer build with more than 6 characters.
98FE and the PC Port of 97 are being looked into for a PS4 Release.
An exhibition is being planned for Evo as well as an announcement of a KoF League similar to the ones that Capcom and Team Ninja have been doing.”

This is just a rumor, but quite a realistic one, with a kof league to keep players in the game, and an Evo booth to shore off the game at the biggest fgc event of the year.

Do you think it’s true?

Thanks to Loona for the tip off!

Edit: here’s the video he posted after ‘secretly recording it when nobody was watching him’

Edit 2: and this is indeed from the pachinko game from Daiichi, thx Yuki Yagami

Which also begs the question, are SNK producing videos for Daiichi? Very much doubt it, so why was the video there? For approvals, maybe? I would have thought once they have the license they just do what they want… Well… Don’t know much more than that. Enjoy the speculation!